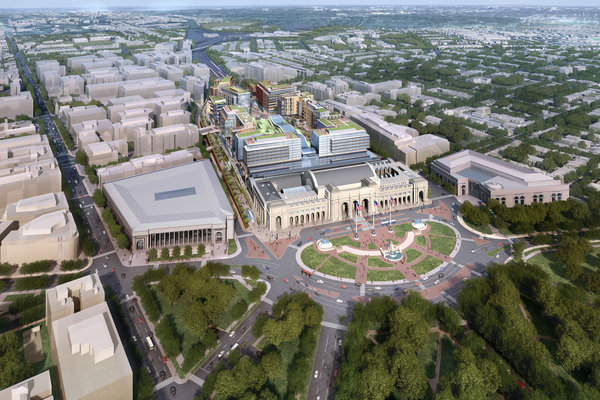 Washington DC‘s venerable Union Station, which opened with much fanfare in 1908, was never about the federal union but about the union of two railroads whose separate terminals had formerly occupied valuable space blocks apart, even encroaching on the National Mall.

But, over time, the monumental Beaux-Arts building and its rail yards that united railroads divided the city it served, its 20 north-south tracks bisecting neighborhoods rather than linking them.

The 14-acre project is to be called Burnham Place, after the Chicago architect Daniel Burnham, who designed the station. The new platform atop the tracks will extend a renovated and reconfigured station that will adjoin the mixed-use project.

To advance this vision, the public-private partnership that oversees Union Station last week named Beyer Blinder Belle Architects & Planners and Grimshaw Architects as master planners for the station part of the project.

The planners will work closely with Akridge, the local developer that acquired the air rights in 2002 for $10 million and has committed to find $1.5 billion in additional financing to build Burnham Place.

The project “has the potential as transit-oriented development to be one of the major developments on the East Coast in the next 20 years,” said Anthony A. Williams, a former two-term Washington mayor and now executive director of the Federal City Council, a nonprofit civic group.

The complete Union Station redevelopment historic preservation plan (PDF) can be downloaded from this page.