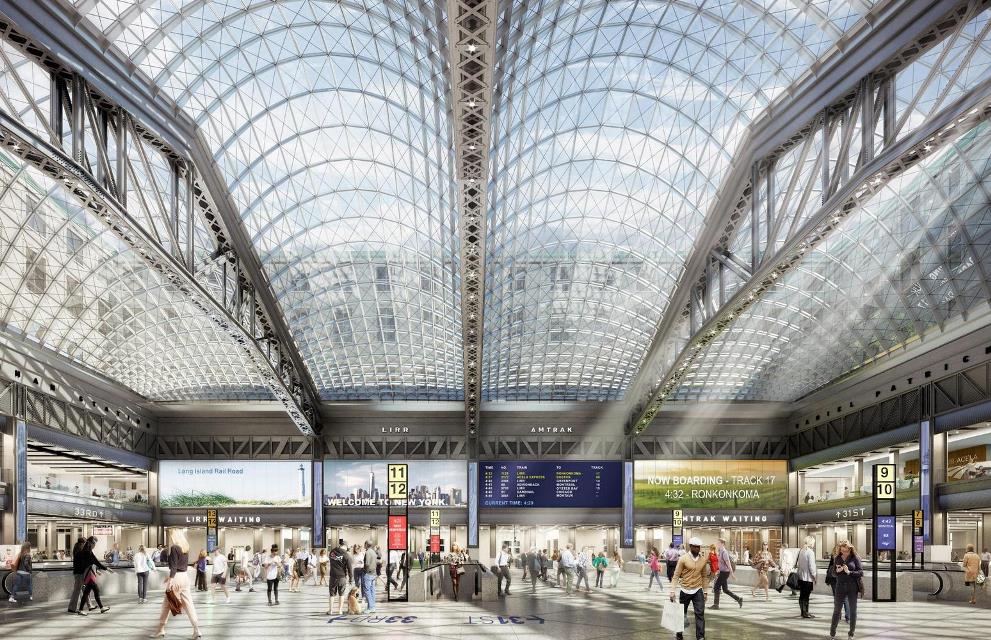 Pennsylvania Station, also known as New York Penn Station or Penn Station, is the main intercity railroad station in New York City. Serving more than 600,000 commuter rail and Amtrak passengers a day, it is the busiest passenger transportation facility in the Western Hemisphere. Entirely underground, it sits beneath Madison Square Garden, between Seventh Avenue and Eighth Avenue and between 31st and 34th Streets. 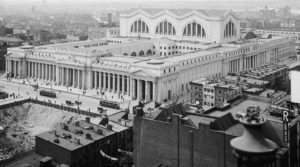 The original Penn Station in 1910.

It was buried into this cramped space after the original Penn Station building–a Beaux-Arts beauty designed by McKim, Mead & White–was demolished in 1963. Many historic preservationists consider it the most egregious act of wanton destruction by a mayor and city planners in the history of the United States. At the time, a New York Times editorially lamented, “Until the first blow fell, no one was convinced that Penn Station really would be demolished, or that New York would permit this monumental act of vandalism against one of the largest and finest landmarks of its age of Roman elegance.”

On the plus side, the ensuing controversy catalyzed the historic preservation movement in the United States, and new laws were passed to protect heritage from misguided urban planners. Less than a decade later, Grand Central Terminal was protected from similar demolition by the city’s new Landmarks Preservation Act. The Act was upheld by the courts in 1978 after a challenge by Grand Central’s irresponsible owner, Penn Central. 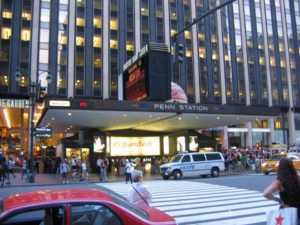 Finally, on June 19, 2017, New York Governor Andrew M. Cuomo announced that the state had closed a final deal on the redevelopment of the Penn-Farley Complex allowing for major reconstruction of New York City’s historic Penn Station to begin after decades of delays.

The final financial agreement between Empire State Development and Related Companies, Vornado Realty LP, and Skanska USA secures the transformation of the historic James A Farley Post Office building into a world-class transportation hub for the 21st century. 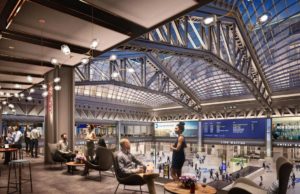 Senator Charles E. Schumer said, “This agreement is a giant step forward in the creation of a grand new Moynihan Station for Amtrak and LIRR riders and the booming growth of the Hudson Yards and formerly fallow Far West Side. I am proud to have helped deliver critical federal resources that paved the way for Moynihan Station and enabled Amtrak to contribute to this critical transportation hub, and I applaud Governor Cuomo for New York’s investment and his lead role in pushing this deal with partners Vornado, Related Companies and Skanska past the finish line. LIRR and Amtrak commuters are going to love the new grand train hall, the significant increase in concourse space and the coming improvements to the brutally overcrowded 33rd Street corridors. In addition, completion of this project will take tremendous pressure off of the overcrowded Penn Station complex, and visitors and community residents alike are going to love the destination food and shopping and grandeur of the entire complex.” 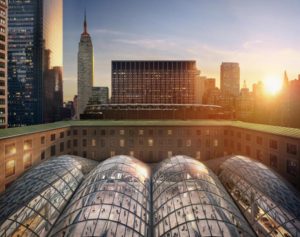 The Farley Building will also house 700,000 square feet of new commercial, retail and dining space within the mixed-use facility and create an iconic civic space for Manhattan’s West Side. This will result in the creation of thousands of new construction and permanent jobs and like Grand Central Terminal, the building will become a vibrant destination in its own right, and a vital amenity for the neighborhood.

“Fifty years after the loss of the original Penn Station structure, passengers will once again experience a world-class rail hub worthy of New York,” Governor Cuomo said. “The Farley Building’s Moynihan Train Hall is two decades in the making, and we are proud that this project is finally a reality. With better access to trains and subways and state-of-the-art infrastructure, the Moynihan Train Hall seamlessly joins history, architectural design and function, bringing the nation’s busiest rail station into the 21st century.” 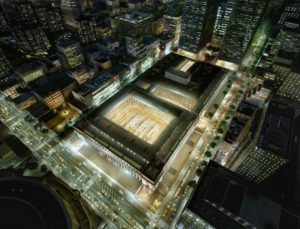 The Farley Building was designed by McKim, Mead and White as a sister to their masterpiece–the original Penn Station. Five decades after the loss of the original structure, the Moynihan Train Hall will once again provide New Yorkers a grand entrance in a McKim, Mead and White architectural marvel. The Farley Building’s train hall will bear the name of one of its great champions—the late Senator Patrick Moynihan.

Council Member Corey Johnson said, “New York City is the greatest metropolis in the world, but its central transit hub – Penn Station – has been an embarrassment. After decades of dilapidation, we have reached a major breakthrough in Penn’s transformation. Under the Governor’s leadership, we are moving forward on Penn – but even beyond Penn, this milestone will have a momentous affect across the northeast region’s transit system.”

The Farley Building’s Moynihan Train Hall will feature a new spectacular 92-foot high skylight to be built above the building’s historic and architecturally-dramatic steel trusses. A total of nine platforms and 17 tracks will be accessible from the Train Hall. The Train Hall will provide direct connections to the Eighth Avenue Subway, and create direct access to the train station from 9th Avenue for the first time, bringing unparalleled regional transportation options within convenient reach of the booming Hudson Yards and Far West Side areas. 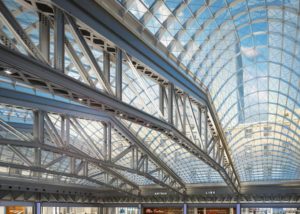 The Moynihan Train Hall is part of the transformational Pennsylvania Station-Farley Complex announced by Governor Cuomo in September 2016 to dramatically modernize, upgrade and redesign America’s busiest transit hub into a world-class facility for the 21st century. The Pennsylvania Station-Farley Complex also includes a comprehensive redesign of the LIRR’s existing 33rd Street concourse at Penn Station and an extensive renovation to the adjacent Seventh and Eighth Avenue subway stations. The plan will include nearly tripling the width of the 33rd Street Corridor, which is among the busiest sections of Penn Station and stretches along the station’s lower level from Seventh to Eighth Avenue. Other improvements include upgraded lighting and wayfinding, and digital screens to convey information and create a modern passenger experience.

The new Train Hall is scheduled to be complete by the end of 2020. 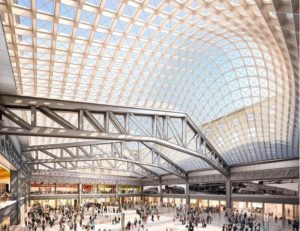 Congressman Jerrold Nadler said, “Decades of neglect created an eyesore at Penn Station – what’s worse, its dilapidation has resulted in unbearable conditions for those who travel through its corridors. Now, thanks to Governor’s Cuomo’s unrelenting commitment and visionary approach to New York’s infrastructure, we are moving full-speed ahead to transform Penn. This is celebratory news for all New Yorkers, and I congratulate the Governor and all of those involved for this huge step in the right direction.”

Amtrak Board of Directors Chairman Tony Coscia said, “The Moynihan Train Hall is part of our multifaceted effort to improve the Northeast Corridor in New York City. The new Train Hall, funded in part by a $105 million contribution from Amtrak, will provide a modern new departure concourse for Amtrak passengers, including a new boarding and waiting areas with integrated ticketing and baggage handling and a new ClubAcela. We appreciate Governor Cuomo’s leadership in bringing this long-planned improvement to completion and his ongoing support for the Gateway Program, as this is the first step towards creating the customer experience, capacity, and reliability that Gateway will deliver to support the long-term growth of rail service at Penn Station.” 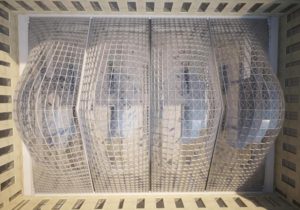 In January 2016, Empire State Development, the MTA, LIRR and Amtrak issued an RFP soliciting proposals for the comprehensive redevelopment of the century-old, landmarked Farley Building, including a Train Hall and the surrounding office and retail space. RFP responses were received in April 2016 and reviewed by a panel of private and public experts from the real estate, construction, design and finance fields.

In September 2016, the Governor announced the selection of a developer-builder team including three companies, Related Companies, Vornado Realty LP, and Skanska USA, to redevelop the Farley Building. Empire State Development and the joint-venture reached financial close on the transaction today.

Governor Cuomo is investing $100 billion in infrastructure projects across New York to promote economic development, create jobs, and expand opportunity. These investments enable New York to rebuild and modernize its roads, bridges, broadband networks, public buildings, and other critical infrastructure across the State while putting thousands of New Yorkers to work. Governor Cuomo has jump-started long-stalled or long-overdue projects, such as the Tappan Zee Bridge, the transformation of LaGuardia and JFK Airports, the Jacob K. Javits Center expansion, and building a new Penn Station.

All renderings provided by the office of Governor Andrew Cuomo.