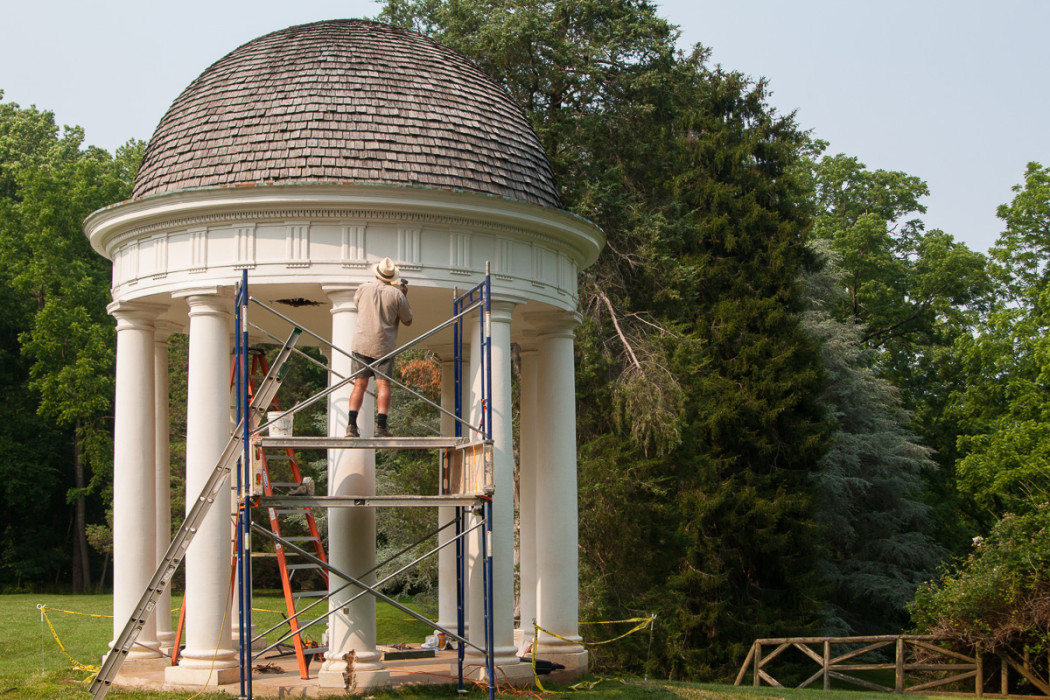 With a leadership gift from Forrest E. Mars, Jr., The Montpelier Foundation will begin the restoration of the iconic Temple, the only Madison­-era architectural structure still in existence today at Montpelier except for the mansion itself.

A monument to James Madison’s philosophical and political legacy, Madison had the Temple constructed during his presidential years (1809­-1817) as an architectural allusion to the “sacred fire of liberty” that burned in the Roman Forum’s Temple of Vesta. The Temple also served a practical purpose for Madison’s household as it is situated on top of an icehouse, which was used to store perishable goods and to stockpile ice cut from the nearby pond.

“The Temple is significant historically and symbolically,” said the Foundation’s president Kat Imhoff. “This restoration project will allow us to offer the public a more complete picture of Madison’s vision of Montpelier and ensure the survival of an important monument to American democracy.”

Mr. Mars is making a gift of $500,000 to underwrite the first phase of the Temple’s restoration, which comes on the heels of a recent structural assessment that confirmed damage to the foundation as a result of a 2011 earthquake, the epicenter of which was located 20 miles northeast of the site.

“James Madison’s name is synonymous with America’s greatest ideas, the guarantee of liberty and justice for all,” said Mr. Mars. “Restoring the Temple is a way of preserving these ideas, and I’m very pleased to help Montpelier move this important restoration project forward.”

The original sketch of Madison’s Temple was made in 1802 by Anna Maria Brodeau Thornton, wife of William Thornton, architect of the U.S. Capitol in Washington, D.C.

Construction began in 1810. Builders first dug a 24­foot well for the icehouse and mounded soil around the base of the structure to give it the appearance of being on a small rise. Local bricks were used to line the icehouse well, and the Temple was built on top. The brick columns were covered with stucco so they would resemble the marble columns of ancient Rome.

During this first phase of restoration, elements such as the brick lining of the interior walls of the ice house, which are original to the Madison­ era, will be restored. Other Madison­era elements for the Temple include the lath and nails of the ceiling of the dome, all of the roof framing, and the brickwork within the columns. Long protected under layers of 20th­century plaster, these features will be returned to their original state.

Conservators will use paint microscopy analysis to determine if Madison affixed decorative composition elements on the frieze of the dome and to determine the material of the original roofing.

Restoration of the Temple has been a priority project for The Montpelier Foundation since its establishment in 2000. With the restoration of the mansion and the South Yard enslaved community site nearing completion, thanks in part to a recent $10 million gift from patriotic philanthropist David Rubenstein, the landscape at Montpelier is rapidly returning to its appearance during Madison’s lifetime.

About James Madison’s Montpelier Montpelier is the lifelong home of James Madison, Father of the Constitution, Architect of the Bill of Rights, and fourth president of the United States. Montpelier is administered by The Montpelier Foundation, which seeks to inspire continuing public engagement with American constitutional self-government by bringing to life the home and contributions of James and Dolley Madison. The historic home and grounds are open to visitors and student groups throughout the year, and through the Robert H. Smith Center for the Constitution, Montpelier provides world-class residential and online educational programs. Montpelier is a National Trust Historic Site.