Since the early 1900s, levees constructed at the southern end of Tomales Bay, California for roads and dairy farms have served to hydrologically disconnect Lagunitas Creek and its tributaries from their floodplains.

As a result, wetland conditions within the Waldo Giacomini Ranch and Olema Marsh were degraded, and hydrologic and ecological functionality of what was once of the largest integrated tidal marsh complexes in Tomales Bay has been substantially reduced.

Natural wetlands provide many important functions for humans and wildlife, including floodwater retention, water quality improvement, wildlife habitat, and recreational opportunities. Because two-thirds of the Bay’s freshwater inflow passes through the Project Area, these wetlands may have once played an integral role in maintaining health of Tomales Bay, which has deteriorated over the last century because of excessive sedimentation, water and sediment quality problems, non-native species invasions, and other issues. 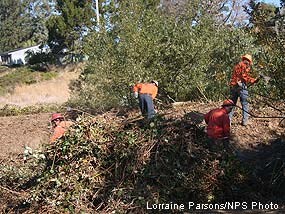 In 2000, the National Park Service acquired the Waldo Giacomini Ranch for the purpose of wetland restoration using a combination of Congressional appropriations and mitigation monies from the California Department of Transportation. Because the Project Area is in the northern district of the Golden Gate National Recreation Area, it is managed by Point Reyes National Seashore.

On October 27, 2018, the public was invited to join the National Park Service, the Point Reyes National Seashore Association (PRNSA), and a cadre of naturalists, scientists, and educators to celebrate the tenth anniversary of the Giacomini Wetlands Restoration Project and learn more about this extraordinary ecological restoration success story.

Ten years ago, on October 27, 2008, the levees keeping tidewaters out of the former Waldo Giacomini Ranch were breeched, culminating a restoration effort that reclaimed more than 500 acres of historic wetlands at the foot of Tomales Bay.

The area has come alive with human visitors, as well as wildlife.

The transformation has been remarkable. The wetlands now support a wide variety of wildlife and native salt marsh vegetation, including increases in California black rails, waterbirds, and shorebirds and some of the riparian associates such as saltmarsh common yellowthroat.

Restoration success is measured in how the native plants and wildlife respond, and an ambitious monitoring program was launched even prior to restoration. Scientists have tracked changes in hydrology, vegetation, fish, frogs, birds and invertebrates.

Morning walking and kayaking tours of the restored wetlands are now at capacity, thanks to the formerly-degraded area’s newfound life and beauty.