Grantee organizations have committed more than $13.5 million in match, for a total conservation impact of about $25 million. 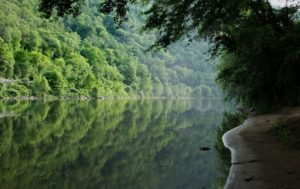 Photo of Delaware River via Pixabay.

“These 41 projects announced today will help ensure a healthier, cleaner, and more resilient future for the Delaware River watershed and the diverse species that depend on it,” said Jeff Trandahl, executive director and CEO of NFWF.

The new grant awards include:

“From coastal marshes to mountains, the Delaware River watershed encompasses diverse landscapes and communities,” said Wendi Weber, U.S. Fish and Wildlife Service’s North Atlantic-Appalachian Regional Director. “The projects and partnerships supported by these grants will conserve and sustain these lands and waters, as well as the people and wildlife who depend on them, for generations to come.”

The Delaware River Restoration Fund, launched in 2013, is administered in cooperation with the Delaware River Watershed Initiative — an NGO-driven partnership between leading conservation organizations to protect and restore water quality in the Delaware River watershed — with major funding provided by the William Penn Foundation.

“The Delaware River Watershed is an interconnected system that needs unified efforts to ensure its health and resilience,” said Stuart Clarke, Watershed Protection Program Director at the William Penn Foundation. “It is broad collaborations and partnerships like the Delaware River Restoration Fund that lead to success in land restoration efforts. We are pleased to support these smart, cooperative, and strategic projects to protect the watershed.”

The Delaware Watershed Conservation Fund, created in 2018, is funded by the U.S. Fish and Wildlife Service to achieve the goals of the Delaware River Basin Conservation Act. The Act guides and supports federal, state, regional, and local partners to collaboratively identify, prioritize, and implement habitat restoration and conservation activities within the watershed.

The Delaware River watershed covers 13,539 square miles of land and water, running from the Catskills in New York through Pennsylvania and New Jersey, ultimately emptying into the Delaware Bay. Despite its position in a major metropolitan corridor, the watershed is home to a remarkable variety of species and their habitats—from mountainside cold water streams to tidal salt marshes—that are economically, ecologically, and culturally important to the region.

Urban and suburban waterways play a major role in the watershed’s communities, with headwaters in neighboring rural and agricultural areas. Grant projects are implemented across this variety of landscapes, serving to improve wildlife habitat and human communities, accelerate implementation of best practices, provide opportunities for people to engage with nature, and ultimately benefit water quality locally and for those downstream.