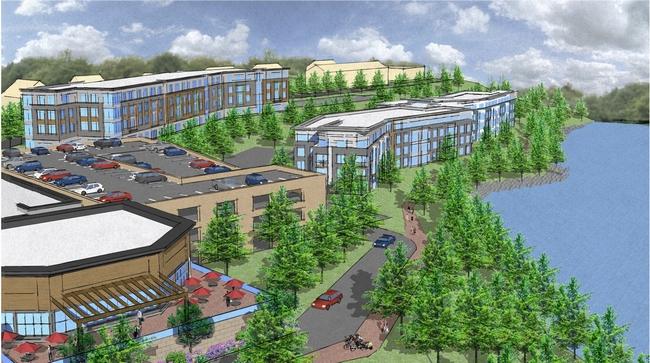 Peregrine Group LLC and Pawtucket, Rhode Island city officials announced on July 14, 2015 a proposal for a commercial and residential redevelopment on nearly 11 acres of prime waterfront property along the Seekonk River and bounded by Division, Water and School streets.

“This is one of the premier pieces of property in the city,” city spokesman Americo Vota said in an interview. “This could be a transformative piece of property for development.”

The city restarted its efforts in late 2013 to develop the stretch of riverfront property after a 2012 settlement ended a nearly three-year-old lawsuit, which had left the parcel’s redevelopment options uncertain. That cleared the way for the city to seek a new developer — and Peregrine, based in East Providence, submitted a proposal.

There’s much work to be done before Peregrine could begin building on the site, which is a brownfield and will require permitting from the Coastal Resources Management Council and other agencies, said Colin P. Kane, a principal with Peregrine. But he believes they could begin building within two years, after permitting and negotiating finances and tax issues with the city.

The medical office and residential apartments are expected to cost about $40 million to $45 million to build. Plus they expect the project needs as much as $8 million more in other costs, including parking, walkways and public access to the riverfront.