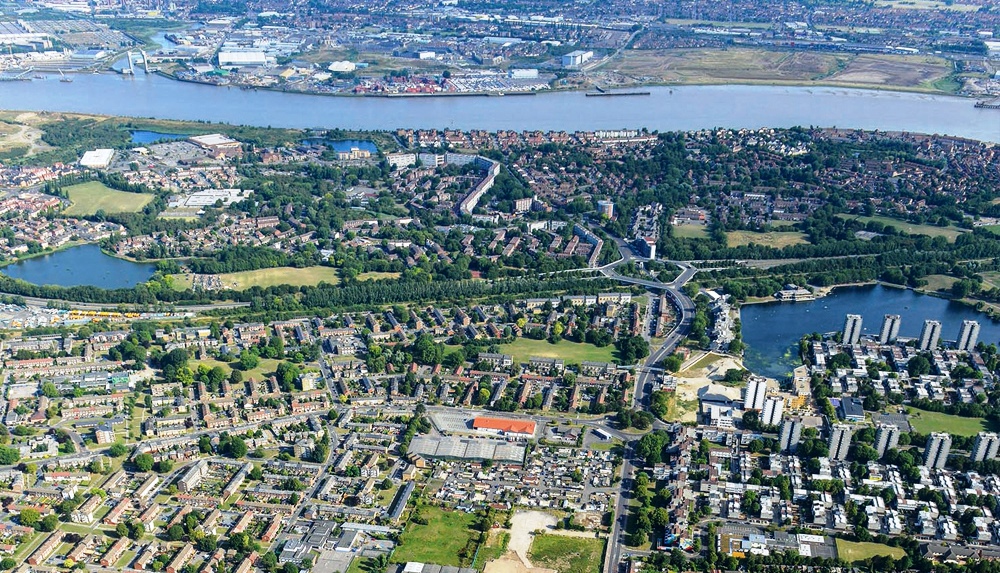 On February 15, 2019, one of the largest regeneration projects in Europe moved a step closer to fruition. That was when London, England’s oldest housing charity Peabody (founded in 1862 by American banker and philanthropist George Peabody) selected Sydney, Australia-based real estate developer Lendlease as the Preferred Bidder for the £8 billion, 11,500 home, Thamesmead Waterfront redevelopment in southeast London.

The move means that, subject to contracts being finalised, Lendlease will work with Peabody in a corporate joint venture (JV) to masterplan and deliver the mammoth project over the next 30 years. The details of the new JV vehicle will be finalized by Summer 2019. 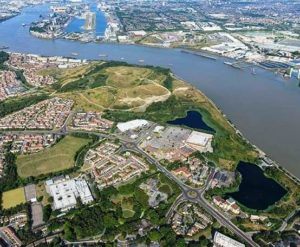 The 250-acre site is currently in need of intensification and activation, being significantly underpopulated for such an urban location. It benefits from 2.5km of undeveloped river frontage, with an abundance of green space, open grassed and wooded areas, canals, two major lakes and an existing town center.

This announcement is the latest phase of Thamesmead’s regeneration, which will repurpose, renew and reconnect (AKA: the “3Re Strategy“) the property. In addition to widespread refurbishment, socio-economic and cultural development, and public realm improvements, the “whole-place” regeneration of the town could deliver 20,000 new homes for London. It is being delivered by Peabody, with development partners, alongside the London Borough of Bexley, Royal Borough of Greenwich, Greater London Authority and Transport for London.

Thamesmead spans the same distance as central London (from Kings Cross to Charing Cross and Bond Street to Liverpool Street.) The Peabody and Lendlease plans would see a new waterfront district of 11,500 new homes, focused around a proposed new DLR station in the heart of the development.

London’s mayor, Sadiq Khan, instructed TfL in 2017 to carry out detailed work on a DLR crossing connecting east and south-east London. The project will also rejuvenate the existing town center, creating 1m sq ft of new cultural, community and commercial spaces for Thamesmead and for London.

Brendan Sarsfield, Chief Executive at Peabody, said: “We are pleased to have selected Lendlease as a development partner for Thamesmead Waterfront. Our shared vision is to create thousands of new homes by the Thames and drive the local economy through new jobs and commercial spaces. With a new DLR river connection complementing the Elizabeth Line on the other side of town, Thamesmead would be more connected to the city than ever before. This would unlock enormous potential and could be a real game-changer for this part of London.”

Dan Labbad, CEO at Lendlease, Europe, said: “As one of London’s largest areas of opportunity to develop new housing and to support business and employment growth, Thamesmead can offer a fresh approach to living in London. Surrounded by water and outstanding wildlife, but within reach of the heart of the capital, we are excited at the opportunity to collaborate with Peabody, the local community and businesses, to bring new high-quality homes and workspaces to this exciting part of south-east London.”

Though based in Australia, Lendlease is behind some of the UK’s largest mixed-use regeneration projects such as Elephant Park and International Quarter London. In early 2018, it was appointed by Google as lead construction partner on its landmark new headquarters’ in King’s Cross, and is the preferred contractor for Birmingham’s Perry Barr redevelopment, due for completion in 2020. Lendlease is also responsible for the redevelopment project of Euston Over Station. In June 2018, Lendlease announced plans for the acquisition (with Starwood Capital) of The Silvertown Partnership, which holds development rights in a major urban regeneration project in London’s East End.

Peabody became the major landowner in Thamesmead in 2014 and is investing in a mixture of refurbishment and redevelopment proposals across the town. Unusually, most of the town’s extensive green and blue infrastructure, as well as a range of community, commercial and industrial spaces is also owned and managed by the housing charity. Since 2014, Peabody has worked with local residents to form its 30-year vision and mission for Thamesmead.

The Peabody organization owns and manages more than 56,000 homes, providing affordable housing for around 111,000 people. As well as bricks and mortar, Peabody provides a wide range of community programs in their neighborhoods, including help with employment and training, health and wellbeing projects, family support programmes and a dedicated care and support service.

The Peabody Community Foundation will invest more than ￡90 million supporting communities over the next 10 years. This year, it invested more than￡7.3 million in programs, helping 1,123 people into work and delivering over 58,000 hours of free-to-access community activities. Peabody also runs a comprehensive program of socioeconomic investment in supporting residents into enterprise, employment, education and skills.

All images courtesy of Peabody.