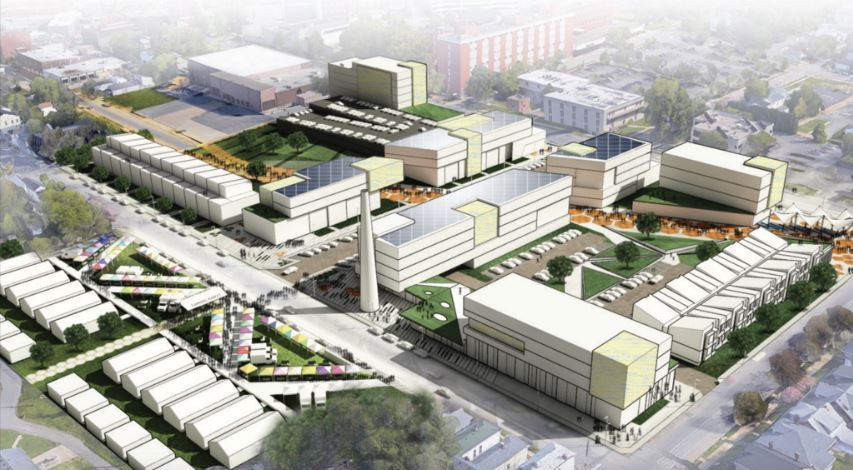 On July 2, 2018, Louisville, Kentucky Mayor Greg Fischer announced that Louisville Metro Government (LMG) has entered into a development agreement with The Marian Group for the redevelopment of the former Urban Government Center (UGC) site.

“We are excited to have signed this development agreement with the City and are ready to move forward with the first phase of this fantastic project,” said Marian principal Justin Brown. “It represents what is great about our city and this neighborhood—mixed-use, mixed-income, intergenerational, and interconnected.”

The Urban Government Center is an 11.85 acre site consisting of four buildings that have served as government offices for the last several decades. 810 Barret, the most prominent of the buildings on site, is a 7-story structure constructed in 1924 as the Kentucky Baptist Hospital; annexes were added to the building at later dates to form an entrance area and elevator shaft.

The remainder of the site consists of a 4-story building constructed in 1940 as housing for nursing students, a 3-story structure erected in the mid- to late-1990’s that housed offices for Louisville’s Air Pollution Control District, and a small steam plant featuring a smokestack constructed with the original Kentucky Baptist Hospital.

“The former Urban Government Center site has long been a staple in the Paristown Pointe neighborhood,” said Fischer. “I’m pleased to have entered into a development agreement with The Marian Group who shares our vision for this project to bring activity back to this historic site for the neighborhood to enjoy for generations to come.”

The Marian Group has sent out notice to the local community that it will be having its first neighborhood meeting on Wednesday, July 25 regarding its plan for the redevelopment of the current Vine Street parking lot into a collection of modern shotgun houses. Additionally, The Marian Group will file that plan with the City soon for planning review.

Marian principal Jake Brown added, “Paristown Pointe is a vital urban neighborhood and we are proud to be adding a new story to its already rich community narrative. Our family and our company have deep roots in the nearby neighborhoods and we are honored to spread those roots into Paristown Pointe.”

Phase 1 of the project includes the development of 22 homes to be built on a portion of the Vine Street Lot, located to the east of Breckinridge Street and to the west of Barret Ave. A farmer’s market space and a pedestrian connection will be constructed on the site, with the remaining area of the Vine Street Lot being retained by LMG to continue the existing community garden in partnership with the neighborhood. Preliminary site work will begin immediately with an official groundbreaking ceremony to be held at a later date.

Phase 2 of the project includes the development of a Family Scholar House, retail, office and mixed-use residential to be located on the balance of the main site bordered by Barret Ave., E. Breckinridge and Vine streets.

“Good things come to those who wait and I’m optimistic in the fullness of time this project will be as much a benefit to the Paristown Pointe neighborhood as many expect it to be,” said Councilwoman Barbara Sexton Smith, D-4. “We’re hopeful that The Marian Group’s performance will exceed its promises including a park, walkways and good looking architecture consistent with the beautiful neighborhood.”

In addition, the development will bring community benefits such as multi-use connections between Breckinridge and Vine streets for pedestrian and bicycle use, preservation of existing mature native species trees, the addition of green roofs and the reuse of existing building materials where appropriate.

“The proposed project by the Marian Group to convert the Urban Government Center into a mixed use housing, retail and community development is a real positive for the Paristown Pointe neighborhood,” said Councilman Pat Mulvihill, D-10. “I hope this project will be transformational in creating continued investment and interest in the flourishing Barret Avenue corridor.”

The selection of The Marian Group was announced in December 2017 after this extensive community engagement process that included multiple on-site public meetings to hear the concerns and values of people from Paristown Pointe and area neighborhoods. In their proposals, development teams were asked to incorporate what was heard at public meetings.

The Marian Group’s proposal aligns with community priorities expressed during an extensive public engagement period. These priorities include:

An evaluation panel of both LMG staff and members of the community was formed to review all five proposals submitted and to make a recommendation to Louisville Forward.

Image courtesy of The Marian Group.