On October 2, 2018, full planning permission was granted for the £120 million Swansea Central Phase One project, which is likely to be a catalyst for city-wide regeneration. 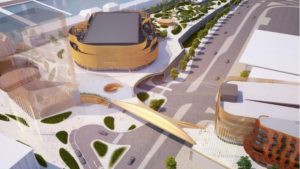 Council leader Rob Stewart said: “This is a big day for Swansea. Today’s final planning decision allows us to progress swiftly with one of our city’s biggest ever transformation projects. Our 3,500-capacity state-of-the-art arena will be the first such venue in the UK to be wrapped in a dynamic digital skin.”

“It will be a unique draw for Swansea, will generate hundreds of new jobs and a significant annual boost to the local economy. It will help us attract more hotels, retailers, restaurants and other leisure offerings,” he continued.

Cllr Stewart was adamant that Swansea Central Phase One would provide a kick start for future development and growth. He added, “Today’s approval by the planning committee is not the end of the journey but the start. The Kingsway and neighbouring roads are already being transformed into a fabulous, people-friendly environment and further planning applications will be submitted for that area’s digital district – this will be a perfect environment for tech companies to grow. We are also working hard to bring to fruition an upgrade for Castle Gardens, to create a Swansea Central Phase Two project and to develop our Civic Centre site.”

“More major investment announcements will follow in the coming months as we deliver more and illustrate why Swansea is such a great place to invest. Swansea has always had great people who make this place unique – it has always been a very special place. Now we are giving it a once-in-a-lifetime lift; Swansea Central Phase One and other major projects will truly transform our wonderful city and further strengthen our great sense of civic pride,” he explained.

The plans for Swansea Central Phase One won overwhelming public support. They will deliver a dramatic, innovative and hi-tech new look for a huge area of land between the core shopping district and the Marina.

The project will be built over the next two years either side of Oystermouth Road; on the LC car park and St Mary’s car park. It will border buildings such as Tesco, St David’s Church and the LC.

Cllr Stewart concluded, “Our one-of-a-kind digital arena will see Swansea become a major destination for tours, acts, conferences and events. The wider Swansea Central Phase One will be a world-class development. Local residents and businesses will soon see a transformed city centre that is a truly great place to spend time, live, work and enjoy. The plans we have in the pipeline for phase two of Swansea Central aim to provide a mix of enhanced new retail, restaurants and leisure – once a full package of funding is secured it will represent £200m of investment.”

The state-of-the-art arena will be managed by The Ambassador Theatre Group (ATG), a global leader in live entertainment. It is due to be part-funded, subject to the approval of a business case, by the £1.3 billion Swansea Bay City Deal, an investment in 11 major projects across South West Wales being funded by the UK Government, the Welsh Government, the public sector and the private sector.

Swansea Central Phase One will bring a total of more than 20,000 sq m of public space to the city. It includes the new parkland – with parking underneath. It will be inspired by Swansea’s coastal landscape and will be the first new park in the city since Victorian times. It will be bigger than a football pitch and will help connect the city to its stunning coast and bay as well as supporting city living. 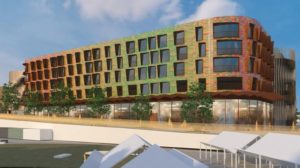 Pedestrian access and transport in the area will be greatly improved by the proposals thanks to the new pedestrian bridge, which will seamlessly connect the city centre with the arena and Marina. It will be on the same level as shops, cafes and restaurants and strengthen the city’s connection with its waterfront. There will be more than 940 car parking spaces as well as highway improvements.

In addition, there are proposals for a new high quality hotel on the arena site. Further details on this will be revealed in due course with a future planning application expected.

Rivington Land, appointed by Swansea Council, is development manager for Swansea Central Phase One. Director Spencer Winter said, “This is a transformational scheme for Swansea and we welcome the approval of the reserved matters. This truly outstanding arena will bring a new and exciting leisure offering to the city. The coastal parkland will provide some much needed new green space to the city centre, supporting the proposed and future residential aspects of Swansea Central regeneration, the arena and strengthening the route to the bay. Phase One is very much the catalyst for further phases of regeneration.”

The architects are ACME, an international practice with offices in London, Berlin and Melbourne.

Highlights of the city center regeneration plan include:

Operators ATG will carefully plan the events programme to dovetail with other activity around the city. There will be strong communication with other local attractions, neighbours and audiences. Staff will be hired and more than 180 events – including music, comedy, musicals, family, dance and conferences – would take place. The programme will combine the best in UK touring – applicable to the arena – with work that involves the best in Welsh culture.

The arena’s decorative cladding includes a proposed integrated LED media lighting solution. The lighting will activate the building in the nightscape and communicate to the public by displaying continuous and dynamic colour effects, abstract artwork and video playback. It will be optimised for views of around 100m away.

The LED lighting design aims to accentuate the elegant form of the bridge, provide a consistent glow of illumination through the perforated sides, and provide sufficient functional illumination for pedestrians.

The coastal landscape of Swansea Bay provides the inspiration for the park’s hard and soft landscaped areas. It will be designed to be as inclusive as possible, for all ages and backgrounds, for those visitors to the town center as a place to enjoy lunch or rest after shopping or if visiting the arena for an event, as well as for those users or families visiting the park specifically to enjoy some green space away from the town center and wanting to dwell longer. It will have a food and drink kiosk, with toilets.

The scheme’s landscaping introduces new green spaces, which together with existing green spaces, provide a series of open space “stepping-stones” to form a green artery through the complex. It aims to create public space which is visually and physically linked to the site and neighboring locations. It reinforces Swansea’s coastal, historical and industrial heritage.

Featured 2012 photo of Swansea city center is by Numero007 via Wikipedia. All renderings are courtesy of Swansea City Council.