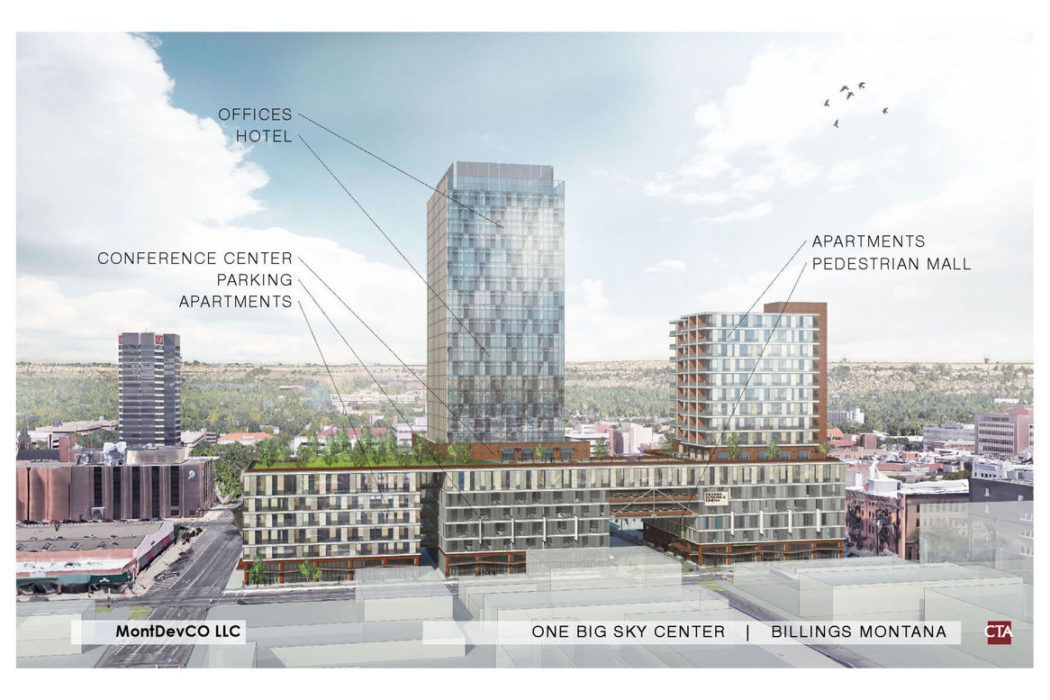 The Billings skyline could be in for a major overhaul — the addition of the state’s tallest building — if a $120 million downtown development comes to fruition.

One Big Sky Center, a multi-use development being proposed for downtown Billings, would include a 70,000-square-foot conference center, a 160-room hotel, downtown residences that cater to both seniors and millennials, plus the addition of major retail and office space downtown.

Plans unveiled Monday also call for a downtown walking mall flanked by two high-rise towers, one of which would be 324 feet tall, dwarfing Montana’s current tallest building, the 272-foot-tall First Interstate tower. Supporters described the project, two years in the making, as a catalyst for new growth and development, and a shot in the arm for the city’s efforts to recruit conventions and conferences.

“It would be fantastic to have something of this magnitude in downtown Billings,” Mayor Tom Hanel said. “What I keep hearing is, ‘where is the money going to come from?’ That seems to be the big question. Obviously that will be a huge hurdle.”

Skip Ahern, developer and principal for MontDevCo LLC, said funding will come from at least four sources: a TIF investment approved by the city council, a construction loan from the bank, equity and an investment program administered by the Internal Revenue Service called EB-5, which could fund up to 25 percent of the construction cost.

Under the EB-5 program, Ahern said, foreigners who invest $500,000 in a project that creates at least 10 jobs receive a green card and a path to citizenship within two years.

Burke McHugh and Greg Tatham, principals in MontDevCo LLC, became interested in Billings about four years ago. “We realized that downtown Billings had a lot going on. It reminded us of where Denver was 30 years ago,” Tatham said.

“We loved what we saw downtown,” McHugh said. Noting that downtown development has taken off in many cities across the country, One Big Sky Center will feature the kinds of amenities to bring Billings into the 21st century, he said.

Note from Storm: I wish Billings well with this. I keynoted former Montana Governor Brian Schweitzer‘s Montana Restoration Economy Forum in Billings back in 2006. I remember that Billings’ downtown was quite nice, with a lot of revitalization potential.