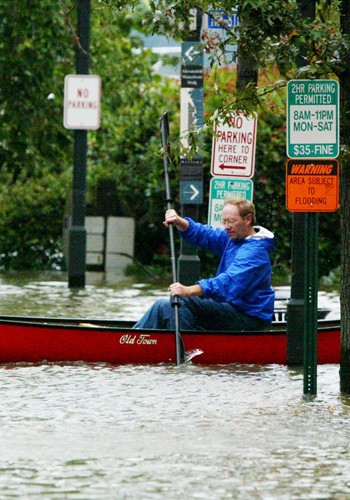 A new master plan for Old Town, the historic center of Alexandria, Virginia, just a few miles from Washington, D.C. has been in the works for more than five years.

It’s now well underway, as the city opens bidding on the plan’s flood mitigation improvements. The plan will transform one of the last “undeveloped” major urban waterfronts in the D.C. area.

The $120 million project, designed by landscape architecture firm OLIN, will add 5.5 acres of public open space; develop a new signature plaza at the foot of King Street, the main thoroughfare through Old town; expand the marina; create walkable connections for the length of the waterfront; and incorporate flood mitigation measures.

Three new mixed-use developments have also been proposed along the waterfront, including a plan to transform Robinson Terminal North.

But do the character-conscious flood mitigation strategies go far enough to protect Old Town from the next super storm? While Alexandria is unique due to historic character, the careful approach to flood mitigation provides a contrast to cities like New York City and Boston, which have recently held design competitions that have yielded ambitious waterfront resiliency plans in the wake of Hurricane Sandy.

The projects that have come out of Living with Water in Boston and Rebuild by Design in NYC will be designed to withstand catastrophic storm events, far more than a 6 foot nuisance flood. While New York and Boston are bigger cities, and arguably at greater risk from sea level rise than Old Town, the effort in Old Town raises questions about the depth of resilience being planned and designed.