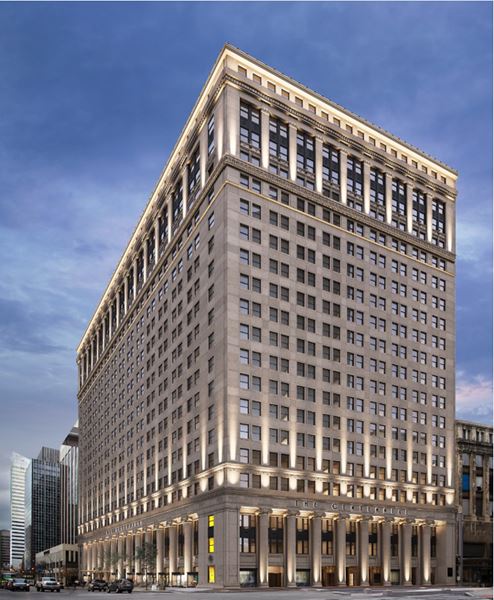 On March 2, 2022, the state of Ohio announced that it was supporting 13 mixed-use redevelopment projects in historic buildings. They are expected to result in more than $2.1 billion in new Ohio payroll and spur more than $1.4 billion in investments the will help revitalize communities across the state.

“The investments being made are large in both size and scale, and will have a catalytic effect on their communities,” said Lydia Mihalik, director of the Ohio Department of Development. “This program will help preserve our communities’ historical (sic) assets and create new opportunities.”

The selected projects are the first proposals to receive state support through the new Transformational Mixed-Used Development Program, which was created as part of the 133rd Ohio General Assembly‘s Senate Bill 39. The bill, sponsored by Kirk Schuring (R-Canton), was signed into law by Governor Mike DeWine and became effective last year.

“This new program allows us to help local communities bring long-term change to underutilized areas by transforming vacant buildings, building new business and recreation spaces, creating more housing, and bringing in thousands of new jobs to Ohio,” said Governor DeWine. “I’m excited to watch the progression of these 13 projects because they will have a tremendous positive impact on the local economy and on the quality of life for area residents.”

During its monthly meeting today, the Ohio Tax Credit Authority (TCA) approved a total of $100 million in tax credits for the mixed-use development projects that will include the construction or redevelopment of more than 5.8 million square feet of transformational space.

The projects were recommended by the Ohio Department of Development, which administers the program.

“We’re attracting companies to Ohio because of our low taxes and excellent business climate, but they need sites to set up shop,” said Lt. Governor Jon Husted. “The transformative, innovative projects approved today aim to create job opportunities, boost further investment, and spur economic growth in communities around the state.”

Major city projects must be located within 10 miles of a corporation limit of Akron, Cincinnati, Cleveland, Columbus, Dayton, and Toledo. Eligible costs include land acquisition, building acquisition, demolition, site improvement, and new construction of the site.

Located in the heart of the Superior Arts District, the CC Superior Holding project will rehabilitate six continuous historic buildings totaling more than 400,000 square feet. The project will transform the mostly vacant and deteriorating buildings into restaurant, retail, office, and residential spaces and will include a new corporate headquarters. The project is expected to create nearly 1,000 jobs, 600 of which will be entry-level positions not requiring a college degree.

Additional phases will construct residential apartment buildings with the modular units and a clubhouse/community center that will host community services related to education and healthcare. The project will focus on transportation, broadband, access to healthcare, and access to affordable and workforce housing for site residents and the surrounding area. The project is expected to create 233 new jobs for Connect Housing Block and more than 100 additional jobs for other site tenants.

Located on a former industrial brownfield site in West Franklinton, the CoverMyMeds Campus project will consist of two headquarter buildings that will house more than 1,600 employees. The site will host on-site parking in addition to trails, plazas, recreation/event spaces, basketball courts, an amphitheater, a boathouse, EV charging stations, community gardens, and improved river access that will be accessible to Franklinton residents. A free art gallery and coffee shop will also be available to the public during business hours.

The second phase of this mixed-use development in Franklinton, Gravity II will include a 12-story, 257-unit residential apartment with ground-floor commercial space and a 5-story, 24-unit townhome building. The project will also include the addition of The Creative Office Building, a six-story building with ground-floor retail and art and recreation spaces, which will house a Center for Innovation and Social Impact, combining new business incubation space with space for nonprofit social innovators. Gravity II will include a co-living concept with rent by-room and shared communal space to help achieve attainably-priced housing in the area. The project is expected to bring more than 11,000 full-time jobs plus more than 7,400 construction jobs.

Located on approximately 1.4 million square feet in downtown Cleveland, the Centennial project will include the historic rehabilitation of the Union Trust Company Building. Largely vacant since 2015, the building has had several previous unsuccessful rehabilitation attempts. Upon completion, the building will house 864 affordable housing units with boutique hotel suites on several floors. The ground floor will house a restaurant, event space, a museum, and The Cleveland Exposition, a tribute to northeast Ohio’s rich history. The project is utilizing Low-Income Housing Tax Credits, as well as federal and state historic tax credits. The project is expected to create 300 permanent jobs and more than 3,000 construction jobs.

The East Riverfront District will include new construction and adaptive reuse in a previously underutilized area of Delaware east of the Olentangy River. The project will help connect this nearly four-acre area to downtown Delaware and create new housing stock in one of the fastest-growing counties in the country. The project will include the construction of five, three-story buildings and the redevelopment of an existing historic industrial building that will house 116 market-rate apartments and 112 affordable units. Additional space will house outdoor community and recreation spaces, office space, and newly constructed commercial space.

Located in the heart of downtown Hamilton, the former Champion Paper Mill will undergo renovation to preserve the rapidly deteriorating historic building. The project includes the construction of a 628,000 square feet sports complex, 30,000 square feet of commercial space for medical providers, concessions, and a restaurant, a 389,000 square foot convention center, and a 333-room hotel with an additional 54,000 square feet for retail and restaurant development. The project is expected to create over 200 permanent jobs targeted at surrounding low-income communities.

The Downtown Elyria Redevelopment includes the rehabilitation of 67,000 square feet of currently vacant buildings into an arena and gaming hub for the Lorain County Community College (LCCC) Esports team. The project will utilize federal and state historic tax credits to rehabilitate the existing, historic Dixon and Robinson buildings, complete with food and dining options on the first floor, as well as two floors dedicated to commercial office space and classroom space for use by LCCC. The project will also develop a full-scale media production facility to produce and manage the building’s Esports programing. The project includes construction of a 76,000 square foot, six-story multi-family building featuring 51 units with retail, a wine bar, and underground parking. The project is expected to create more than 150 full-time jobs and 348 construction jobs.

Located in the Newark Downtown Historic District, the Historic Newark Arcade will be rehabilitated as restaurant space, art studios, retail, commercial, and offices spaces. The site will also house 19 market-rate apartments. A revitalized Arcade will once again be the focal point of downtown Newark and serve as a community center. The project will utilize federal and state historic tax credits to renovate the 44,000 square foot space. Once completed, the Arcade will host the local farmers market, giving Supplemental Nutrition Assistance Program-eligible families access to healthy and nutritious food.

The Liberty Beall project includes the construction of an approximately 16,000 square foot, two-story building with retail and restaurant space, as well as eight market-rate apartments on the upper floor. The project is part of the East Liberty Corridor, with close connections to both downtown Wooster and College of Wooster. It will serve as proof that the corridor can support the expansion of residential development. When completed, the project is expected to provide 25 full-time jobs.

This project will rehabilitate the historic Renkert Building in downtown Canton. The Renkert Building is part of the Upper Downtown Canton Historic District and was Canton’s first skyscraper. The 113,502 square foot building will be redeveloped into an extended-stay hotel with restaurant space on the first floor. The project also includes the construction of a three-story building on an adjacent lot with hotel, restaurant, event, and retail uses, as well as public parking to support businesses in the surrounding area. The project is utilizing state historic preservation tax credits and will retain the historical integrity of the Renkert Building. Upon completion, the project will create 138 jobs, the majority not requiring a college degree.

The Uptown Mentor project will redevelop a blighted, underutilized stretch along Mentor Ave into a lively, pedestrian-friendly community in the downtown central business district of Mentor. The six, largely vacant parcels make up nearly four acres in the heart of Mentor. This project will construct an approximately 43,000-square-foot building that will house restaurant, retail, office, and recreation space. The project will also house a medical service provider, a rooftop patio, and ample green space. The project is expected to create over 1,500 full-time jobs.

The Van Wert Forward project includes the historic rehabilitation of 19 buildings on a 2.8-acre site in the Downtown Business District of Van Wert. The project will preserve and enhance the downtown assets which will be redeveloped as retail, office, institutional, and dining space. It will also house 58 residential units, with more than 49,000 square feet of commercial space.

Another round of the Transformational Mixed-Use Development Program will open in the coming months.

Image of the Centennial project courtesy of Millennia Housing Development.