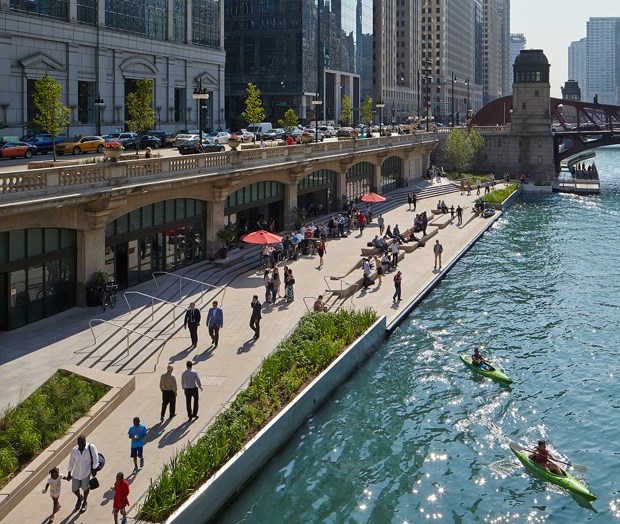 The Chicago Riverwalk is a 15-year revitalization project whose final installment opens to the public this week. The project has helped reframe the river as a public asset.

Since the first section opened in 2009, the Riverwalk has pulled visitors to its many new restaurants and bars and public sites, like the Vietnam Veterans Memorial Plaza.

Carol Ross Barney, the founder of Ross Barney Architects and the design lead on the Riverwalk project, says that the goal of the project is to “return the river to Chicago and return Chicagoans to the river.”

The new Chicago Riverwalk is a 1 1/2-mile major public amenity at the river level along lower Wacker Drive, extending from Michigan Avenue west to Lake Street, it offers a mix of concessions and public activities. Symbolic links to the City’s past are evident, while creating state-of -the-art facilities for citizens, visitors and fans of the River as it flows through the City of Chicago.

The Chicago Vietnam Veterans’ Memorial Plaza commemorates the sacrifices of Illinois’ fallen soldiers, connects people to the riverfront, provides an escape from the steel and glass of the City, and bejewels the City’s waterfront. Its public objectives and finished forms embody what a memorial plaza should be; a remembrance of those that served, and a celebration of the living.

The Plaza occupies land, reclaimed by the rebuilding and relocation of Wacker Drive, to create an urban park, with terraces and bench-lined ramps that gently transition from busy city streets to more quiet spaces near the river. It provides a green refuge in the center of the City while creating a vital link between the upper Wacker Drive and the Chicago River.

The final phase of the Riverwalk has enabled uninterrupted public waterfront activity along the Chicago River’s south bank, from Lake Michigan west to the confluence of the river’s north, south, and main branches.