Blackfriars, in Gloucester, England was founded about 1239. The site now hosts one of many projects that are repurposing, renewing, and reconnecting assets and neighborhoods in this ancient city, which sits in the southwest of England, near Wales in County Gloucestershire. 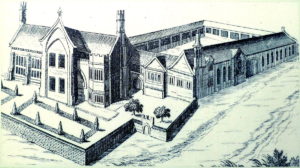 A 1721 view of Blackfriars by William Stukeley.

It’s one of the most complete surviving Dominican black friaries in Britain. Blackfriars is now owned by English Heritage and restored in 1960, it’s currently leased to Gloucester City Council, and is used for weddings, concerts, exhibitions, guided tours, filming, and educational events.

In recent years, Gloucester has attracted some £190 million worth of regeneration. “Gloucester is attractive, this is a great location and I’m very confident about the future of Blackfriars,” says Sajid Javid, MP.

Planners such as Rob Ellis from SF Planning, believe redevelopers will be very interested in the crucial land that connects the city center and the River Severn waterfront. 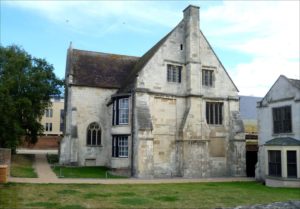 Blackfriars. By Philafrenzy via Wikipedia.

Around £4.13 million of central government funding has already been used to carry out archaeological investigations, ground contamination works and road improvements in advance of the building work at Blackfriars and Quayside. All of this activity is deisgned to make the land more attractive to private redevelopers, while protecting the rich local heritage.

Councillor Mark Hawthorne, leader of Gloucestershire County Council, says: “This development will have a huge impact on the city of Gloucester. It’s the linkage between the docks and the city centre“.

The £55 million redevelopment of Gloucester’s derelict Bakers Quay site is also starting to take shape. The 4.13 acre site next to Gloucester Docks is ready for the construction of new residential apartments, a 104-bedroom Premier Inn Hotel, Brewers Fayre restaurant and Costa Coffee. 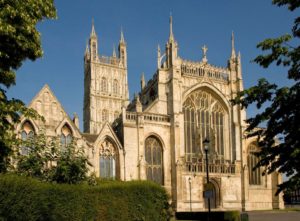 The land near the Gloucester and Sharpness Canal – a key part of the regeneration of central Gloucester – is being developed by Rokeby Merchant Developments with Gloucester-based Barnwood Construction as the main contractor. “Our real emphasis is trying to preserve as many of the historic features and offer people the traditional Gloucester Docks apartments of iron columns, the preserved wooden beams, the brickwork and views of the canal with a few extras that we are introducing,” said Adrian Goodall, director of Rokeby Merchant Developments.

Simon Carey, managing director of the locally-based Bakers Quay contractors, Barnwood Construction, said: “We are very proud to be part of Gloucester’s regeneration. We have carried out many projects in the city in the past but this site has been an eyesore in Gloucester for a long time and we are pleased to be delivering the first phase next year. We are employing a lot of Gloucester based tradesmen, in particular bricklayers, who will be involved in rebuilding the building and restoring it to encompass some of the historical features but also to perform as a modern building for Brewers Fayre.”” 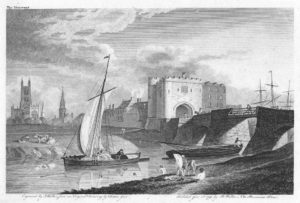 Traffic on the River Severn in Gloucester,Circa 1798. Drawing by C. Catton.

Gloucester was founded in AD 97 by the Romans under Emperor Nerva as Colonia Glevum Nervensis, and was granted its first charter in 1155 by King Henry II.

Economically, the city is dominated by the service industries, with a strong financial and business sector. Historically, the aerospace industry was a major player.

But these days, it seems that the future of this ancient city is increasingly based on smart, sensitive redevelopment that capitalizes on that heritage while making the place attractive to private investment.