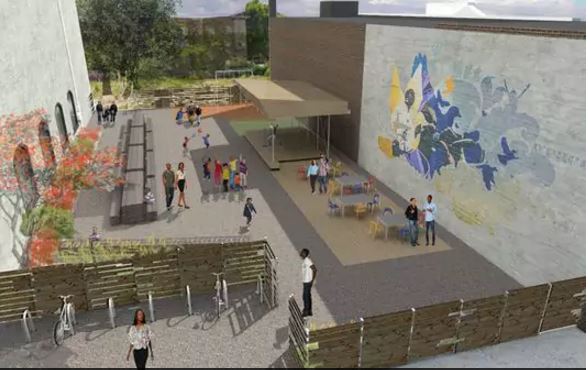 There’s an old saying that fits our moment in Detroit, Michigan’s revitalization efforts: “Nothing works, but everything might.”

It means that no single silver-bullet project can turn around a city like Detroit by itself, but that multiple modest efforts carried out across a myriad of fronts can add up to significant progress.

An example is “Mack Lot: A New Kind of Gathering Place by MACC Development”, one of the Knight Cities finalists. It’s a plan to bring people of different backgrounds together by transforming a vacant 8,000-square-foot lot near Mack and Van Dyke into a meeting space that will include a performance stage, a playground, rain gardens, public work spaces and space for food vendors.

That’s the idea behind the Knight Cities Challenge, which this week announced its latest round of finalists for micro-grants for urban revitalization. Some 21 of the 144 finalists across the nation are from Detroit.

The Knight Cities Challenge seeks new ideas from innovators who will take hold of the future of our cities. For three years, it has invited applicants from anywhere to tell us their ideas for making the 26 Knight communities more vibrant places to live and work.

Another Detroit finalist is Atwater Beach, an idea pitched by The Detroit Riverfront Conservancy. Mark Wallace, CEO of the Detroit Riverfront Conservancy said the riverfront is an important gathering space for the city, and that a new beach would offer another family-friendly area to fill a gap by the park. “On the riverwalk, you see folks who have been in Detroit for two months and folks who have been here for 85 years,” Wallace said. “It’s really that special place where everyone feels proud for this city and everyone can get along and be themselves.” The beach would not include a swimming area because of strong currents.

The challenge is designed to help spur civic innovation at the city, neighborhood, and block levels, and all sizes in between. In particular, it hope to generate ideas that focus on one or all of three key drivers of city success: attracting talented people, expanding economic opportunity and creating a culture of civic engagement.

Applicants included activists, designers, artists, planning professionals, hackers, and architects. No project is too small — so long as the idea is big.