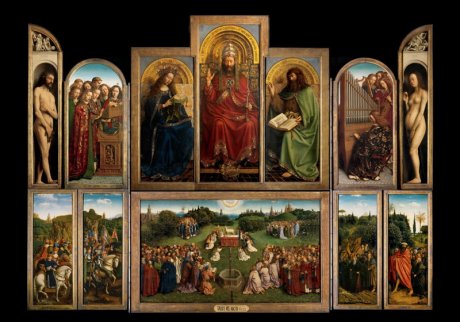 The Museum of Fine Arts, Ghent (Belgium) has announced that the first phase of restoration of the Altarpiece of the Mystic Lamb, better known as the Ghent Altarpiece, has been completed.

You can admire the newly restored outer wing panels and their frames at the museum throughout the 2016 summer. Meanwhile the team of the Royal Institute for Cultural Heritage (KIK-IRPA) is documenting the final result with photography and scientific imagery.

The altarpiece is attributed to the studio of Hubert van Eyck, who died in 1426, while the work was in progress. It might have been completed by his more-famous brother, Jan van Eyck.

A true masterpiece, the prized polyptych has been fought over for more than 100 years; complicated by two world wars and stored in Altaussee salt mines.

But despite being stolen six times, the panels, almost miraculously, have always made their way back to Ghent. When restoration is complete, all remaining panels will continue to be displayed at the Joost Vijd Chapel of St. Bavo’s Cathedral.

Are you intrigued by the first phase of restoration? The exhibition restoration/REVELATION at the Caermersklooster, opening in October, will guide you through the startling path of the past four years of restoration and research.

It culminates in a life-sized video projection of the outer wings that condenses the entire restoration into a few breathtaking minutes. 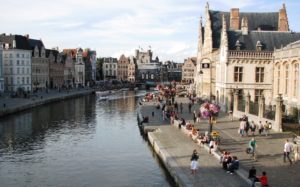 Note from Storm: If you haven’t been to Ghent, I highly recommend it. It’s one of the world’s most beautiful cities, and the cuisine is to die for.

I keynoted the European Confrence on Ecological Restoration in Ghent about a decade ago, and can’t wait to return.

And don’t forget to take the short train ride over to Bruges, which–believe it or not–is even more spectacular.