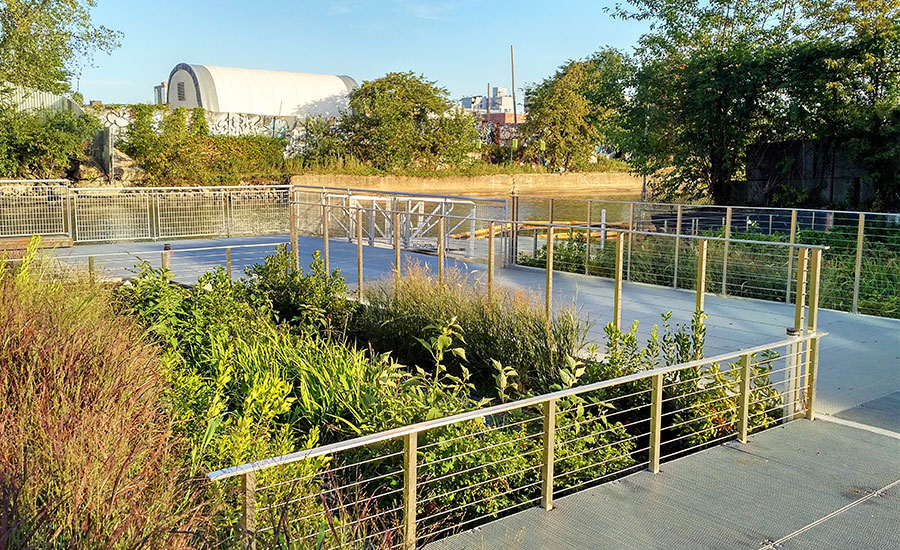 The Gowanus Canal, which was declared a Superfund site in 2010, received more good news as the city, landscape architects, elected officials, and environmental groups recently installed green infrastructure along the canal.

This tiny new park in Brooklyn has a big job: absorbing and filtering a million gallons of stormwater each year that flows into one of the most putrid waterways in the United States. Located at the end of Second Street on the western side of the Gowanus Canal, the Sponge Park, as it is called, was designed to address decades of environmental degradation of the Gowanus and serve as a prototype for other green infrastructure projects.

The Gowanus Canal is a canal in Brooklyn, New York on the westernmost portion of Long Island. Connected to Gowanus Bay in Upper New York Bay, the canal borders the neighborhoods of Red Hook, Carroll Gardens, and Gowanus, all within South Brooklyn, to the west; Park Slope to the east; Boerum Hill and Cobble Hill to the north; and Sunset Park to the south. It’s 1.8 miles long, and there are seven bridges over the canal.

Once a busy cargo transportation hub, the canal is now recognized as one of the most polluted bodies of water in the United States. The canal’s history has paralleled the decline of domestic shipping via water. The canal is still used for waterborne transportation of goods, notably fuel oil, scrap metal and aggregates. Tugs and barges still navigate the canal daily.

A legacy of serious environmental problems has beset the area from the time the canal arose from the local tidal wetlands and fresh water streams. In recent years, there has been a call once again for environmental cleanup. In addition, development pressures have brought speculation that the wetlands of the Gowanus should serve waterfront economic development needs which may not be compatible with environmental restoration.

Like many older cities in the U.S., New York has a combined stormwater and sewer system. During major storms, the system becomes overwhelmed and untreated water—including sewage—runs into the city’s rivers and water passages, like the Gowanus.

Gowanus has a rich history. Originally a large marshy wetland the area was the site of early Dutch settlement, important Revolutionary War battles, and industry that includes the energy and construction sectors. Planners envision the area as a new site for large residential development, a controversial proposal in the face of climate change projections.