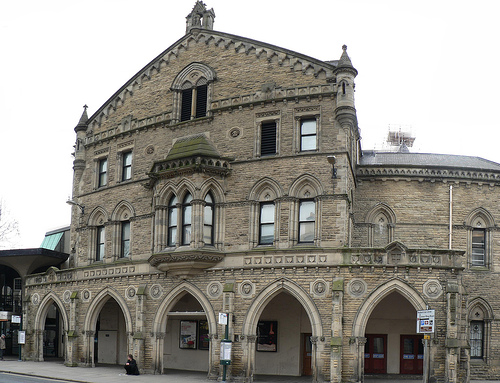 York Theatre Royal is a theatre in St. Leonard’s Place, York, England, which dates back to 1744.

In De Matos Ryan’s recent renovation, sensitive and ingenious lighting plays a vital role in lending coherence to the diverse parts of a building that has been much altered over its 272-year history.

The firm’s principal task was to boost audiences and encourage building use at other times by improving the bars and foyers “in such a way that it’s obvious that this is a place with life in it,” says partner Angus Morrogh-Ryan.

York Theatre Royal was built on the site of the medieval St. Leonard’s Hospital. Parts of the old hospital can still be seen in the modern building, including archways and walls. Under the stage lies a well, which is believed to be dated from the Roman era of York’s history.

The 1744 theatre replaced a theatre in Minster Yard, built by Thomas Keregan, with the encouragement of the City Corporation, in 1734. Twenty five years after its construction, in 1769, Tate Wilkinson paid £500 for a Royal Patent, and, accordingly, it was renamed the Theatre Royal. Wilkinson ran a company that included theatres in Hull, Leeds, Pontefract, Wakefield and other Yorkshire towns. His company was reckoned to be the leading provincial company, and he attracted many of the finest actors of the period to act in York.

Since Wilkinson’s time the theatre has undergone several renovations and upgrades. In the late 1800s the theatre was refurbished into the Victorian style, including, in 1880, a new Victorian Gothic frontage, which is decorated with carved heads representing Elizabeth I and characters from Shakespeare’s plays. An extensive renovation of the theatre, with a new modernist foyer, was carried out by architect Patrick Gwynne in 1967. The theatre has been designated a Grade II listed building by English Heritage.

A new social space, a street-side café, has now been prominently located in the Victorian building’s former entrance colonnade, which has been partially glazed to enclose it. “Local conservation officers might still say we’ve done too much,” says Morrogh-Ryan, “but we wanted to give the building a civic presence.”

Photo of York Theatre Royal in 2006 via Wikipedia.