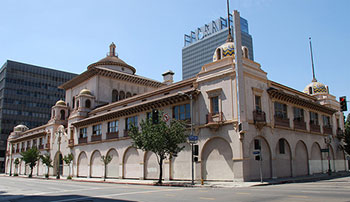 Hearst announced yesterday that it had entered into an agreement with the developer, The Georgetown Company, to restore its building in Los Angeles, the former home of the Los Angeles Herald Examiner. The redevelopment will include a mix of creative office space, retail and restaurants.

The building on 11th and Broadway was designed by Julia Morgan, who also designed Hearst Castle. The building was completed in 1914.

Needing a paper to support his bid for president, William Randolph Hearst founded the Los Angeles Examiner in 1903. The paper was a companion to his San Francisco Examiner, which Hearst’s father, George, acquired in 1880 legend has it, as payment for a poker debt.

The Herald Examiner Building adjoins two rapidly growing and resurgent neighborhoods, South Park and the Broadway Corridor, that are quickly becoming known as destinations for creative industries as well as upscale shopping and restaurants. The building’s noteworthy two-story lobby will be restored to its original grandeur, along with a complete renovation and restoration of the building.

“The opportunity to participate in the downtown Los Angeles revitalization, in an area with rapidly increasing demand, is one we could not pass up,” said Michael Fischer, Vice President of Georgetown. “We’re excited to have the chance to restore and spotlight this historic building, and to do so in partnership with Hearst Corporation is a great privilege.”