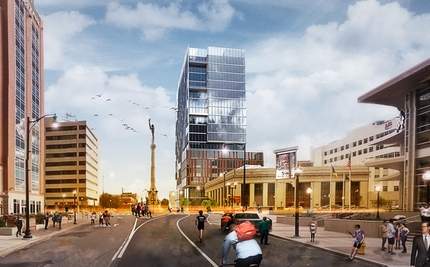 A project designed to redefine the Allentown, Pennsylvania skyline, attract millennials, boost innovation and enhance public and green space for the community got its introduction Tuesday.

City Center Investment Corp. disclosed its revised plans for Five City Center, an office/residential project, to the Allentown Neighborhood Improvement Zone Development Authority (ANIZDA) at its project review committee meeting. The plan calls for building a $200 million to $250 million complex at Seventh and Hamilton streets around the Wells Fargo building.

Also, the addition of spaces for people to collaborate and exchange ideas in the office tower will help create an innovative district that could tap into the talent of local universities said Sy Traub, chairman of ANIZDA.

“Some of the universities want to come downtown so they can engage directly with the businesses,” Traub continued. The project also adds a health care element by providing space for physician and dental offices in the residential tower, he added.

“We wanted the master plan to speak to the neighborhood better,” Reilly said. “We are ultimately trying to build a community downtown.”