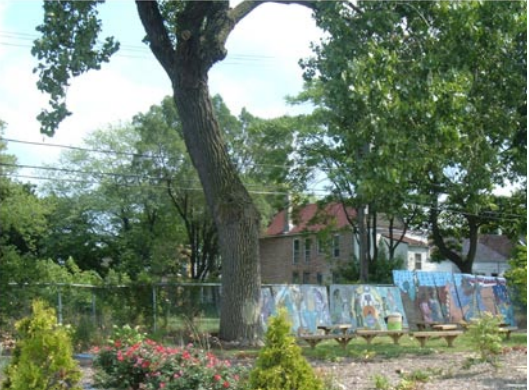 The Large Lots Program in Chicago, Illinois, which sells vacant city-owned parcels to nearby homeowners for $1 each, is getting a lot larger.

Eligible buyers must own property on the same block as the vacant lot, be current on their property taxes and have no outstanding debt to the city.

An effort to curb Chicago’s vacant lot epidemic by repurposing the parcels as gardens and for other residential uses, the large lots program launched in 2014 in Greater Englewood and East Garfield Park, and expanded last year into other South and West side neighborhoods.

The Large Lots Program is a housing land use approach that was developed as part of the Green Healthy Neighborhoods public planning process. The program is being piloted in community areas where the City owns large amounts of vacant land. The core goals of the program are:

LargeLots.org was built to make the process of purchasing City-owned land through this program easier for residents. It was initiated by Demond Drummer at Teamwork Englewood, built by DataMade, and funded by LISC Chicago with support from the Boeing Corporation, and the Knight Foundation for LISC’s OpenGov for the Rest of Us project.

On December 10, 2014, LargeLots.org was officially adopted by the City of Chicago as part of the Large Lot Program.

More than 550 lots have been sold since the program’s inception.

“The Large Lots Program turns vacant lots into neighborhood assets that benefit neighbors and communities,” Mayor Rahm Emanuel said. “This program’s success is driven by people who are committed to strengthening their communities block by block, and this expansion will create opportunities to strengthen neighborhoods throughout the entire city of Chicago.”

Teamwork Englewood was formed in 2003 as part of the New Communities Program, sponsored by Local Initiatives Support Corporation (LISC) and the MacArthur Foundation. Its goal is to unite the many organizations serving Englewood residents and work toward the common goal of building a stronger community.

From the LISC Chicago website: LISC Chicago’s mission is to connect neighborhoods to the resources they need to become stronger and healthier. That mission is achieved, in part, by emphasizing the following values:

Photo from the Englewood Quality of Life Plan.