In the Bay Area of California, Mare Island is a peninsula in the city of Vallejo, about 23 miles (37 km) northeast of San Francisco.

It’s best known as the long-time home of the Mare Island Naval Shipyard, which was closed in 1993. I (Storm Cunningham) started writing my first book (The Restoration Economy) in 1996, and Mare Island was one of the first visionary, large-scale brownfield projects I encountered in my research.

It seems that, every few years, I hear of yet another company that has won one contract or another to remediate and/or redevelop the place, but little progress seems to be made on the redevelopment side (much remediation has been completed).

The shipyard had long been the economic engine of the city of Vallejo, employing 10,000 workers after reductions in 1988. When Congress ordered the base closure as part of the BRAC process, the shipyard employed 5800 workers. So, it’s little wonder that the city has been trying steadily to bring Mare Island back to productive use.

After the base was recommended for closure in 1993, the City undertook an extensive community-based reuse planning process, which resulted in a Final Reuse Plan that was approved by the Vallejo City Council in 1994. The Final Reuse Plan laid out the general vision for the Island’s redevelopment. The Reuse Plan was the basis for the Mare Island Specific Plan, which was approved in 1999 and amended in 2005 and 2007. The Mare Island Specific Plan designated land uses and established development standards for identified reuse areas and provided an implementation program to guide all subsequent planning activities. 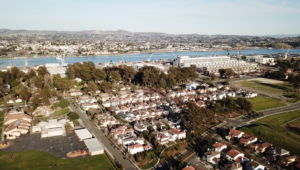 Preservation of many of Mare Island’s 661 structures and other cultural resources was an additional factor in the planning process. As the oldest shipyard and naval facility on the West Coast, the shipyard earned a National Historic Landmark designation by the federal government in 1975. In 1979 California listed the entire naval base as a State Historical Landmark. In 1999 the city of Vallejo added Mare Island to the National Register of Historic Districts with 42 individual city landmarks.

“This is an exciting time for Vallejo as The Nimitz Group enters Phase 2 of their development plan for Mare Island,” said Vallejo City Manager, Greg Nyhoff. “This is the natural evolution of megaprojects such as these and speaks to the continuity and foresight of this phased approach. Bringing in Southern Land Company’s experience and resources will help to build a resilient and equitable future for the community.”

The Nimitz Group is a joint venture of investors Gaylon Lawrence, Jr., Sebastian Lane and Dave Phinney, who seek to transform Mare Island into a world-class destination with high-quality housing, transportation, protected open space, employment and entertainment options. The Nimitz Group owns approximately 800 acres on Mare Island, allowing for transformative investments that will address the needs of the island’s residents and the larger Vallejo and surrounding communities.

The Nimitz Group issued this statement: “We are excited to work with Southern Land Company to make our vision for Mare Island a reality. They have one of the best reputations in the development industry for creating unique, walkable communities that promote the well-being of their residents and the larger area. We believe that with Southern Land Company we will be able to establish Mare Island as a sustainable, self-sufficient community that includes current and future residents, long-term employers, vibrant natural open space and exciting entertainment options.” 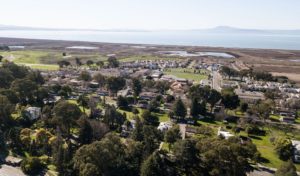 The City of Vallejo has entered into a public-private partnership with The Nimitz Group for future redevelopment plans on the island. The developer had previously enlisted architect HOK for the master-planning process and HOK will now work in concert with Southern Land Company on the long-term planning and design.

“Redevelopment of such a large area is complex and the City is thrilled to see The Nimitz Group partnering with an award-winning developer,” said Vallejo Mayor, Bob Sampayan. “It shows they are committed to doing what’s right for Mare Island and we look forward to working with Southern Land Company to realize the island’s full potential.”

Since its founding in 1986, Southern Land Company has created live-work-play neighborhoods. One of their projects, Westhaven, was listed as one of the “50 Best Master Planned Communities in the US”, and won an “Excellence in Development Award” from the Urban Land Institute chapter in Nashville.

Over the next few months, Southern Land Company will work closely with the City of Vallejo and The Nimitz Group to conduct due diligence and research to refine development plans, will recruit and add to the project team, and will begin long-term planning to support the future vision for Mare Island.

“This is a once in a lifetime opportunity, and we are excited to work with the City of Vallejo and the community to implement the long-term vision for Mare Island,” noted Southern Land Company Founder Tim Downey. “As we begin this process, we look forward to sitting down with the businesses, residents and community to get their thoughts on what they see in Mare Island’s future.”

All photos courtesy of The Nimitz Group.