As more cities are facing the realities of remediating the scars of an industrial past, brownfield sites are increasingly being converted into a hybrid of public space combined with stormwater treatment facilities like Tulsa, Oklahoma’s Guthrie Green and the Santa Fe Railyard Park in Santa Fe, New Mexico. 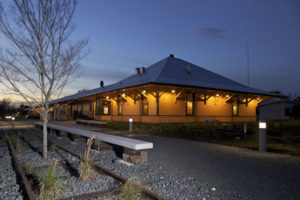 In Gainesville, Florida, a multitude of partners led by the Gainesville Community Redevelopment Agency (CRA) restored one such brownfield site into Depot Park, a centrally located stormwater park in the city’s urban core near Depot Avenue and Main Street. 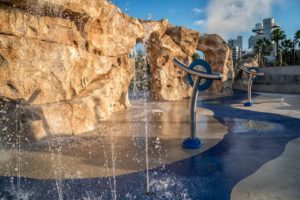 She says that the main goal was to take a useless space and make it a place the community can enjoy. “You can make something incredible, beautiful and fun out of nothing,” she said. But not for nothing: the budget for the park was $5.9 million. “It’s the largest undertaking the CRA has taken on,” she said, “and probably the city as a whole.”

Once the industrial hub of Gainesville, the park land had hosted a variety of rail corridors and industrial uses such as coal gasification and other manufacturing plants. Where industry once dominated, the site now features walking paths, interpretive exhibits, and native vegetation creating a natural North Florida wetland landscape while on-site ponds naturally treat stormwater and reduce contaminants entering Paynes Prairie.

What was once contaminated earth, the residue from the site’s history as a rail yard, is now a blooming field of wildflowers and native plantings lined by decorative tracks that commemorate this former railroad transportation hub. 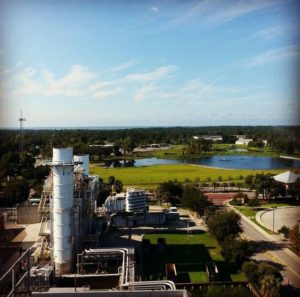 The vision for Depot Park was to create a contemporary public greenspace to serve as Gainesville’s “Central Park”. To be a signature city park located downtown and provide a space for public outdoor enjoyment unique to the city.

The City of Gainesville was awarded a Regional Brownfield Pilot project grant in 1997 by EPA, Region 4. The brownfield site, located in the vicinity of the former railroad depot on Depot Avenue in downtown Gainesville. 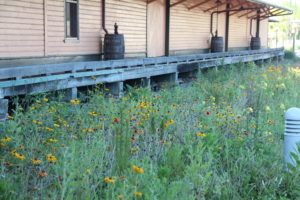 The primary contamination source at the site was coal tar residues from the former MGP. In 2000, a remedial action plan (RAP) was developed to remediate the site and Gainesville Regional Utilities (GRU) began “The Big Dig”.

The area remediated was excavated to a depth of 50 feet and over 147,000 tons of contaminated soil was removed. Over 123,000,000 gallons of groundwater were treated, and over 255,000 tons of dirt removed. Contaminated soils from the site were transported to an approved landfill for disposal. 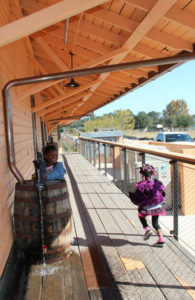 In addition, the city wanted ponds designed for the site to capture and treat stormwater from an 89-acre area in downtown Gainesville.

The City of Gainesville Public Works Department developed a basin plan and designed a stormwater treatment system to capture the runoff from 47 acres of downtown and and runoff from the remaining 42 acres re-routed from the adjacent Sweetwater Branch Creek.

The design consist of a treatment train approach where stormwater flows through a series of baffle boxes, forebays, wet detention ponds, a braided stream and wetlands.

In 2012, the Gainesville Community Redevelopment Agency (CRA) rehabilitated the Historic Depot Building. Listed on the U.S. National Register of Historic Places, the historic train station is a reminder of the important role this site played in Gainesville’s Industrial history. Following the restoration of the building, the CRA began construction of the park amenities at Depot Park. 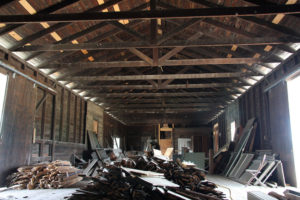 Completed in Summer 2016 after years of planning and restoration, Depot Park features a Children’s Adventure Play area with a custom splash pad of tumbling waterfalls, water soakers, and ground jets.

The City of Gainesville Parks, Recreation, and Cultural Affairs Department now cares for Depot Park, which free to the public. Depot Park has become a revitalizing amenity for residents, visitors, and the city itself.