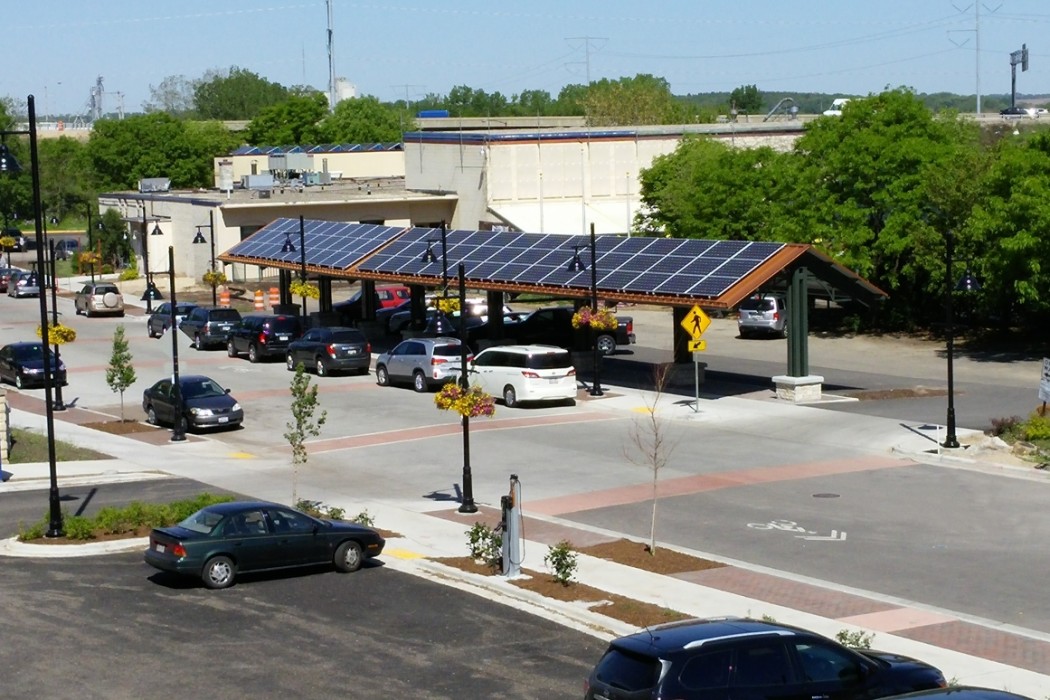 The City of Middleton, Wisconsin’s Terrace Avenue Reconstruction Project has earned the American Society of Civil Engineers (ASCE)-Wisconsin Section 2015 Engineering Achievement Award in Category B – Construction Cost over $2 million and under $10 million. The award honors projects that contribute to the community and promote progress through excellence in engineering. 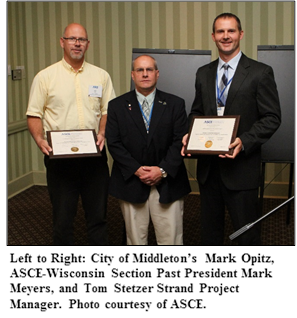 The Terrace Avenue Reconstruction project does just that. By expertly balancing the project’s functionality and aesthetics, the finished project not only enhances but also integrates with the surrounding community and culture.

The City of Middleton unveiled the reconstructed Terrace Avenue to the general public June 12, 2015, in a ribbon cutting ceremony. Attended by Mayor Kurt Sonnentag and members from the project team, including Strand Associates, Inc. Project Manager Tom Stetzer, P.E. and Field Representative Jon Solan, the ceremony marked the end of the $3.6 million project to revitalize the corridor.

Terrace Avenue serves as an important link between two commercially vibrant areas in Middleton: Greenway Center Development and the Downtown Business District. While it links these areas physically, the Avenue did not fit the districts’ architectural or aesthetic themes.

In 2013, the City hired Strand to provide comprehensive engineering services for the Terrace Avenue Reconstruction project, including topographic survey, design, bidding-related and construction-related services. As part of the project management team, Strand along with Vandewalle & Associates, and City staff collaborated to design a corridor that unified the themes of the community through aesthetics, such as colorfully designed bike racks, and functionality, such as bike sharrows and ADA compliant sidewalks that align with the City’s desire for safe and accessible routes for multimodal transportation.

Middleton has been heralded 8 years in a row as one of the top ten small city places to live by Money Magazine and CNN. The City is also known as the Good Neighbor City with its focus on community engagement and outreach with service clubs and its support of local businesses. With 22 parks, 25 conservancy areas, and numerous nationally recognized trails for hikers and bikers, the City is a welcoming environment for all types of people and transportation. 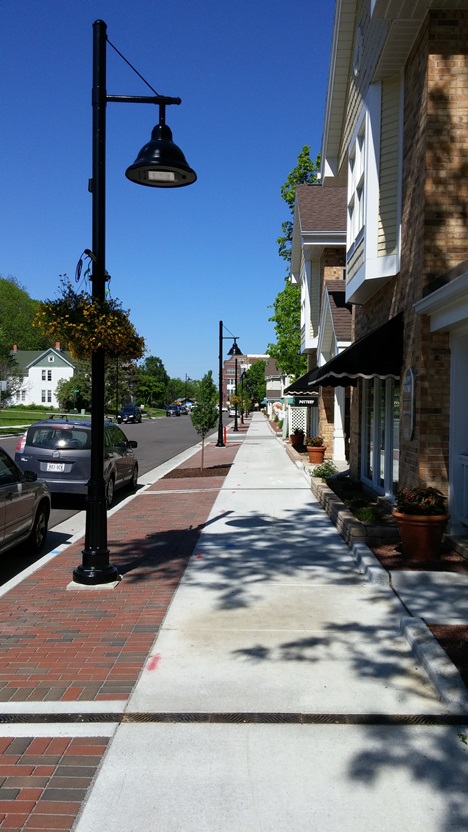 To blend in with Middleton’s personality, Terrace Avenue needed to better accommodate multimodal traffic such as pedestrians, vehicles, and bicycles as well as adapt to local businesses’ future expansions and current developments, including a 38-apartment complex planned for construction at the same time as the corridor project. This was all accomplished with an expert balance and blending of utilitarian and aesthetic needs.

The first step of the project required complete utility relocation. Terrace Avenue had some of the oldest utility infrastructure in the city and drastically needed an update. The City, Strand, and the entire project management team worked closely with utility companies to properly relocate all overhead utility infrastructure underground to make room for planned and future improvements. Underground utilities, including sanitary sewer, water main, and storm sewers were also replaced.

The City had long desired a downtown farmers’ market to add to its image of sustainability and support of local businesses. With help from one such local business, Capital Brewery, and from team member Strand, a market arcade canopy was built that will enable farmers to park their vehicles in the brewery’s parking lot and set up shop without the need for a tent or awning.

The canopy is not only ripe for future farmers’ markets but also for community and brewery events. The Brewery will be expanding its beer garden, building an outdoor patio, and converting its indoor storage area into an entertainment hall to promote a festival-like atmosphere and community engagement.

However, getting to the Brewery and other local businesses and events requires reliable transportation and parking, both a common problem in many cities, especially where there are many businesses located in one corridor. To alleviate parking concerns, the team added additional street parking and a new 28-stall parking lot along Terrace Avenue with a gravity block retaining wall to protect the existing steep banks. The limestone patterned gravity block wall did not need geogrid as the gravity block wall uses its mass to hold back the banks, thus saving the City from further excavation and costs. The limestone was chosen to match the natural limestone outcroppings that can be found throughout the city.

To accommodate bike traffic, bike sharrows were added to alert vehicles to share the road with cyclists. To make the street even more bike friendly, the team installed bike parking (inverted U-type racks that are parallel to the street and adjacent to commercial businesses) as well as a bike corral area near the brewery. The bike corral racks are colorfully and creatively marked with Middleton’s logo and provide a decorative place for cyclists to safely store their bikes while enjoying the community and local businesses.

To facilitate safer pedestrian travel, sidewalks were widened and designed to comply with ADA standards. In addition, new decorative LED light poles were added to replace street lighting. The new lights are two to four times more energy-efficient and provide a unique charm to the City’s streets. Additionally, the light poles have hanging flower baskets that are automatically watered with an innovative Rain Bird irrigation system.

The Rain Bird system collects stormwater from the market canopy roof and directs it to an underground holding tank through the canopy downspout system. The collected “grey” water is pumped from the tank to irrigation piping under the sidewalks’ brick terraces and then through the light poles to automatically water the 70 hanging baskets twice a day.

With the widened sidewalks and additional street parking, there was not enough room for stormwater treatment or to implement the City’s desired Photovoltaic (PV) energy generation system. Instead of trying to fit these functions into the corridor and disturb the updated aesthetics or buy additional land to house them, the team adapted the upgrades to provide stormwater treatment and PV energy.

For stormwater needs, the terraces were completed with permeable clay brick pavers that consist of clay bricks with larger voids between to allow stormwater to infiltrate into the lower stone layers under the bricks and eventually back into the groundwater table. This permeable clay paver system is the first of its kind to be used in the city.

Additionally, and another first for the City, is the porous asphalt parking lot that captures and treats rainwater generated by the additional lot’s surface. While the City had used porous asphalt in other locations, including bike paths around the city, using it in a public parking lot was a first.

The PV energy generation system is housed on the market arcade canopy outside of Capital Brewery. Solar panels on the canopy shelter roof provide energy not only to the street light poles and electric car recharging station in the new parking lot, but also offset the electrical costs of operating the new canopy, and any residual energy is sold back to the electric utility company as a source of revenue. The project was funded by the City’s Tax Increment Financing District (TID) No. 3 and required coordination and constant communication with adjacent property owners and the entire community to make sure the design and end product fulfilled the City’s goals and blended in with its surroundings.

The Terrace Avenue Reconstruction project serves to show how beauty and purpose can blend together for a successful and sustainable urban street design.

“The project has enhanced the City’s downtown area by promoting community interaction through opportunities for events, encouraging local business traffic via convenient access and parking for patrons, and providing an overall welcoming and sustainable area for visitors and residents to enjoy,” said Stetzer. “This project is a pivotal upgrade that will effectively serve the growing City of Middleton well into the future.” ^^^^^^^^^^^^^^^^^^^^^^^^^^^ This story and photos were submitted to REVITALIZATION by Katelyn Vitek of Strand Associates, Inc.