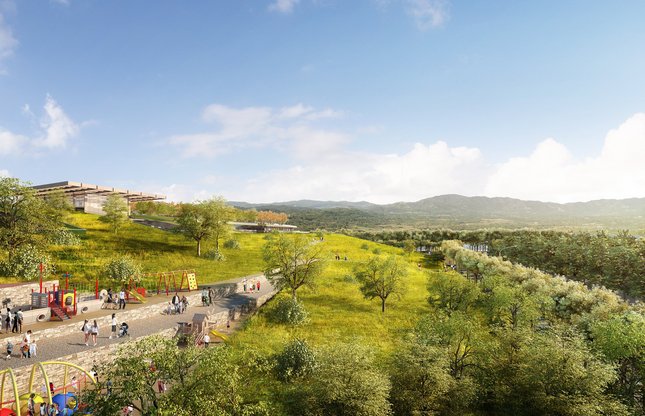 The new owners of Vallco Shopping Mall in Cupertino, California announced Wednesday they have a $3 billion plan that will radically remake the outdated center and cover it with the “largest green roof in the world.”

And they’ll even throw in a new school for the city.

Sand Hill Property Company unveiled its ambitious plan to transform Cupertino’s struggling, half-empty shopping mall into a hybrid hub of downtown-style retail and office buildings as well as hundreds of rental homes all wrapped within a man-made open space preserve.

The Hills at Vallco, as it’s being called, would replace most of the current mall and parking lot with a downtown street-grid pattern near the corner of Wolfe Road and Stevens Creek Boulevard .

A 30-acre community park that Sand Hill officials are touting as the “largest green roof in the world” would be built above and around the mall’s buildings.

“There will be nothing like it when we are done,” Reed Moulds, Sand Hill managing director who is leading the redevelopment effort, told this newspaper. “We believe its community focus will make this a remarkable place to live, work, dine, play, learn and recreate.”