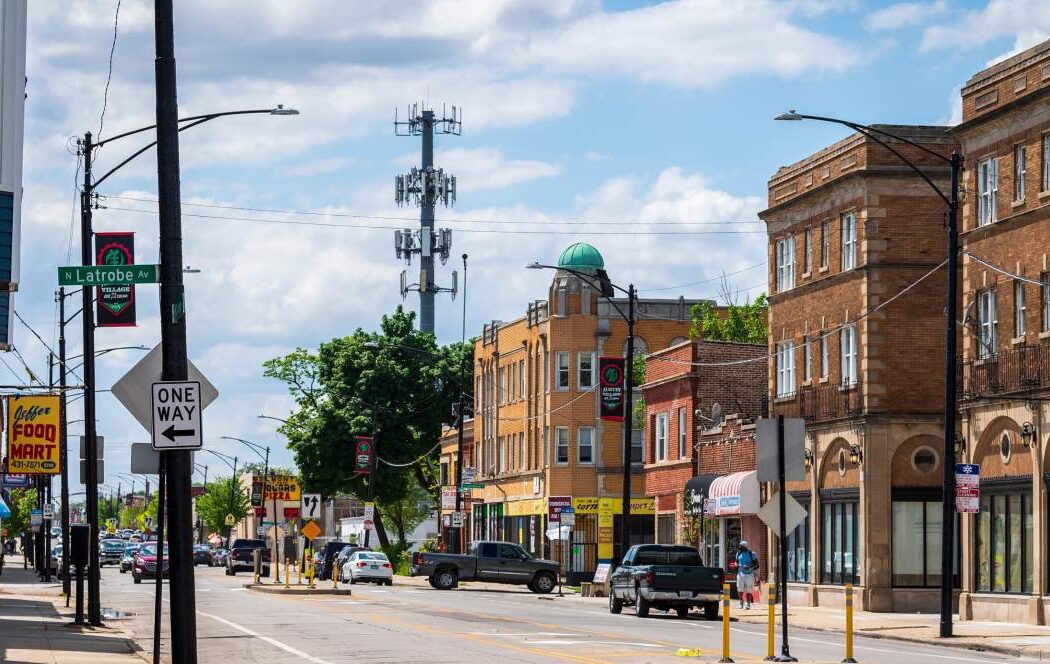 Over the past year or so, regular readers of REVITALIZATION have probably noticed several Requests for Proposals (RFPs) on our “Business” page related to the INVEST South/West revitalization program in Chicago, Illinois. INVEST South/West is Mayor Lori E. Lightfoot’s $750 million-dollar strategy to revitalize the commercial cores of 10 undeserved community areas on the South and West Sides. 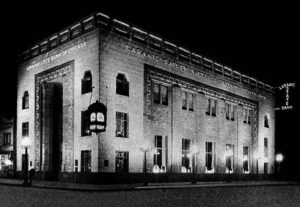 Now, on March 8, 2021, Mayor Lightfoot announced three winning proposals related to those RFPs. The three winning projects include a mixed-use residential complex anchored by a blues museum and cafe, a 56-unit affordable rental building with tenant gardens, and a sustainable food and culinary campus.

“High-quality proposals like these, from racially diverse development teams, represent the City’s community-driven approach to neighborhood revitalization,” DPD Commissioner Maurice Cox said. “In addition to meeting local goals, these projects will provide the foundation for additional public and private investment where it’s needed most.”

Valued at more than $65 million, the projects were selected from 12 responses to RFPs issued in the fall of 2020 for three opportunity sites in Austin, Auburn Gresham and Englewood. The sites were identified by South and West Side community stakeholders through a community engagement process that started with the INVEST South/West initiative’s launch in the fall of 2019.

“Initiatives such as INVEST South/West are critical in advancing our goal to enhance the socioeconomic vibrancy of our historic South and West Sides,” Mayor Lightfoot said. “Each of these winning proposals will contribute to this goal by giving residents access to new and exciting cultural, affordable housing, employment resources. I look forward to seeing these projects come to life and supporting other INVEST South/West projects just like them in the near future.”

The RFP sites include the former Laramie State Bank and adjacent land at 5200 W. Chicago Ave. in Austin; vacant land at 838 W. 79th St. in Auburn Gresham; and multiple vacant parcels along the 800 block of West 63rd Parkway in Englewood.

The winning proposals include: 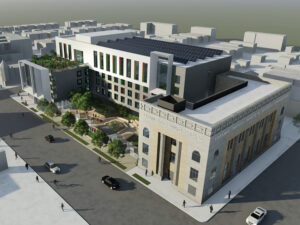 Planned for the former Laramie Bank building and approximately 20,000 square-feet of adjacent land, the proposed $37.5 million project will renovate the landmark structure with commercial uses that include a blues museum, bank branch, café, and business incubator.

The adjacent land will be redeveloped with a mixed-income, multi-story rental building that includes a green roof, public plaza, social spaces, and outdoor art.

The project is expected to generate up to 150 construction jobs and 22 full-time positions. 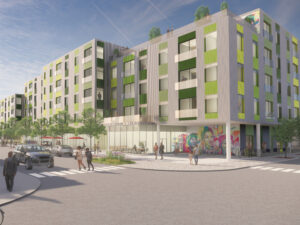 Planned for 23,000 square-feet of vacant land near the intersection of Halsted and 79th streets, the approximately $19.4 million proposed project will create 56 units of affordable housing with ancillary ground floor retail uses and 35 parking spaces.

Designed to complement the planned, Chicago Prize-winning “Healthy Hub” adaptive re-use project across the street, the complex will include private garden lots, a playground for residents, private amenities, and public open spaces.

The project is expected to generate up to 100 construction jobs and three full-time positions. 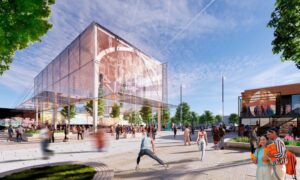 Planned as the second phase of the Englewood Square shopping center, Englewood Connect is a $10.3 million, “eco-food hub” that will establish culinary-related uses that empower, employ and feed local residents.

A public plaza will serve as its focal point. Later phases will include a flexible market space and an event center. The project is expected to generate approximately 80 construction jobs and 45 permanent full-time positions.

“INVEST South/West has already made a tremendous impact in our neighborhoods even amidst the challenges of COVID-19,” said 16th Ward Alderwoman Stephanie Coleman. “The future of our families and our entire city rests on all of us continuing bold investment initiatives like this one to give each of our communities the support they need to grow and thrive.”

Issued by the Department of Planning and Development (DPD), the RFP for each location identified preferred uses, public amenities and design concepts based on community input. Development team responses to the RFPs were received by DPD in November 2020; seven for Austin, four for Englewood and one for Auburn Gresham. These developments were based on community input and feedback, which helped shape priorities for these parcels of land and this is the first time community wealth building was a goal of DPD’s RFP projects.

“Thanks to INVEST South/West, residents in Auburn Gresham and our neighboring South and West communities are able to turn their dreams of entrepreneurship into reality,” said 17th Ward Alderman David Moore.

“Once completed, each of these three winning projects will not only leave a lasting impact on the communities they reside in, but they will also inspire a wave of other residents from underrepresented backgrounds to also become business owners and changemakers within their communities,” he added.

Each proposal was assessed by a City of Chicago evaluation committee based on responsiveness to the goals of each RFP, developer experience and capacity, development team diversity, community wealth-building components, proposed designs, financial viability, community feedback, and other criteria. This is the first time developer diversity has been taken into account for a project of this caliber, a testament to ensuring Black and brown developers are included in community change.

Each project will be refined through ongoing community engagement efforts. Each will also be subject to a redevelopment agreement (RDA) with the City of Chicago that could include public incentives to enable their completion, such as Tax Increment Financing (TIF), land write downs, tax credits, and other public resources.

Projects that incorporate privately-owned land at each site will be negotiated with the properties’ current owners.

Each RDA, along with and required zoning changes, will be subject to City Council approval. Groundbreakings could occur by the end of the year.

“Initiatives like INVEST South/West highlight the untapped potential of neighborhoods like Austin and give residents the opportunities they need in order to be successful and give back to their communities,” said 37th Ward Alderwoman Emma Mitts.

“I want to congratulate each of the three winners and am excited to see their projects enrich their respective neighborhoods and our city as a whole,” she concluded.

The second round of Requests for Proposals (RFPs) is open through March 30, 2021 for development projects in Bronzeville, New City – Back of the Yards, North Lawndale and South Chicago. 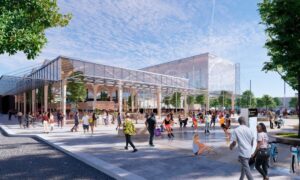 “We envision a dynamic mix of community spaces, accessible to all local residents and connected to the surrounding neighborhoods,” explains Dawveed Scully, Urban Planning Associate Director at SOM. “With flexible spaces that can be used year-round, our plan creates an ecosystem that cultivates upward mobility anchored by entrepreneurialism.”

Englewood Connect is designed to elevate Englewood residents through a mixed-use, phased development strategy focused around a flexible public space called the Green Street Commons. The Englewood Living Room, a proposed pavilion with operable doors and windows, will be open year-round, allowing for markets, co-working spaces, exhibitions, and places for the community to gather and engage with one another. 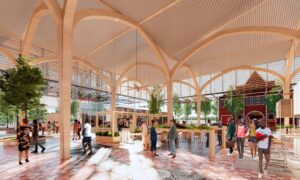 Alongside new architecture, the plan restores and reinvigorates one of Englewood’s historic assets. The landmark “castle” Firehouse station, originally built in 1929 and now vacant, will be transformed into a multi-purpose venue tailored to the community’s needs. The adaptive reuse project aims to protect the landmark structure for the next century. The space will connect nearby amenities to the site and create a platform for small business growth.

As a team, Englewood Connect holds a portfolio centered around community growth and enhancing underutilized spaces, with project work in Englewood ranging from architectural support with students and local construction opportunities to small business expansion.

“Our development approach is built with a laser focus on community vitality, and identifying and helping local businesses grow while leveraging strategic partnerships with large institutions. INVEST South/West is the perfect toolbox to corral resources and implement a sustainable economic development approach across all of Chicago’s neighborhoods,” says Zeb McLaurin, President of McLaurin Development Partners.

The team will work with existing local businesses, community organizations, artists, and makers to develop a program informed by Englewood’s identity, and designed to serve the community’s changing needs.