At the foot of a Buddha statue atop a hill in the Shwe Thaung Yan sub-township of Myanmar’s Ayyerwady region, Htay Aung is having a moment.

The 63-year-old retired professor of Marine Science sits there, almost in meditation. Below him, a vast thicket of mangrove glistens in the gold of a setting sun. 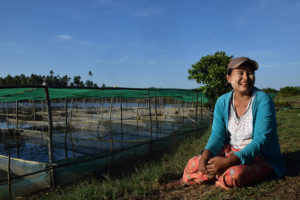 Clam farmer Thein Thein Sein is happy as she looks upon her zero-investment clam farm. Shellfish are a restorative crop, as each harvest leaves the water cleaner. Credit: Stella Paul/IPS

For Aung, this stretch of mangroves—known as the Thor Heyerdahl Climate Park—is a symbol of joy, hope and all things good.

Shwe Thaung Yan, about 185 km north west of Yangon, once had a severely degraded forest where 75 percent of its mangroves had been destroyed. Then the story changed.

“We gave three years of hard work in planting these trees. Now they are growing tall. Soon, they will be the biggest assets of our people,” Aung says, pointing at the forest and the tiny dot of houses that appear in the horizon.

As 2019 begins, the planters in Shwe Thaung Yan are gearing up to plant two billion trees; their largest planting to date. Once finished, the restoration program of Shwe Thaung Yan will be complete, and the restored forest will store approximately 300 million tons of CO2.

Aung, on the other hand, is more focused on restoring the underwater marine life, especially the local seagrass and the coral reef.

“The seagrass can stock much more blue carbon than the land trees or mangrove. It is also what feeds Dugong or sea cow—a critically endangered sea mammal. So, with the help of WIF and Pathein University, we now aim is to build a marine sanctuary around Shwe Thaung Yan,” he says.