In Louisiana, funding has been approved to ecologically restore Queen Bess Island, a major breeding ground for the state bird, the brown pelican.

“Restoring Queen Bess Island will be a milestone as we work to revitalize Louisiana’s coast and grow the many bird species that call it home,” Governor John Bel Edwards said. “Louisiana prioritized this particular Deepwater Horizon habitat restoration project because it is one of the most used nesting homes to our state bird. Pelicans fill the skies of coastal Louisiana and we want to make sure they continue to flourish here.”

Queen Bess is the third largest brown pelican rookery in Louisiana, producing 15-20 percent of the state’s nesting activity. It is also nesting habitat for about 10 species of nesting colonial water birds, such as tri-colored herons, great egrets and royal terns. The island, which is battling land loss from subsidence and erosion from over wash, currently has about only five acres of nesting habitat available.

The announcement was made by the state’s Coastal Protection and Restoration Authority (CPRA) and the Louisiana Department of Wildlife and Fisheries (LDWF).

The Louisiana Trustee Implementation Group (LA TIG) approved funding for the project that will restore 30 acres of brown pelican and wading bird habitat and seven acres of nesting tern habitat to the 37-acre island near Grand Isle in Jefferson Parish.

The funding comes from the Deepwater Horizon oil spill Natural Resource Damages (NRD) settlement administered by the LA TIG. The project will begin in early fall of 2019, and should be completed by the middle of February 2020. 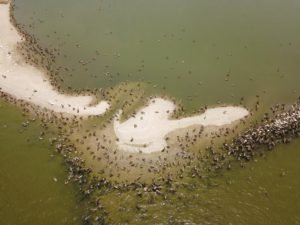 Queen Bess Island has historical significance for the brown pelican in Louisiana. The brown pelican ceased nesting in the state in 1961, and by 1963 had virtually disappeared from Louisiana’s coastal wetlands primarily because of the now-banned pesticide DDT. In 1968, LDWF began a restoration project of the species with Queen Bess as ground zero.

From 1968 through 1976, brown pelican chicks were captured from Florida and relocated to coastal Louisiana, including Queen Bess. In 1971, 11 nests were documented on the tiny island, marking the first successful recolonization of brown pelicans in Louisiana.

“I just can’t imagine driving along our coast and not seeing pelicans,” LDWF Secretary Jack Montoucet said. “But, that almost happened. Now we have a chance to make sure the brown pelican has more nesting area with this restoration project. We look forward to working with our partners in restoring this vital habitat.”

CPRA Board Chairman Chip Cline said, “CPRA is proud to lend our barrier island restoration experience to this important habitat project. Queen Bess Island was heavily impacted by the Deepwater Horizon oil spill and the oiled pelicans became emblematic of the disastrous ecological consequences of the terrible event. We believe the restoration of Queen Bess Island will also take on an outsized symbolic value with regard to both, Louisiana’s and the brown pelican’s recovery from the oil spill.”

The project will enhance the existing rock ring around the island, which will serve as containment for the sand fill material that will increase the island’s elevation. The island will be sloped with the highest elevation at the southwest end and the lowest at the northeast.

On the southwestern side of the island, a set of rock breakwaters will be placed just offshore. This feature will create a lagoon style nursery feature without harsh wave energy for the young birds to learn how to swim, preen and feed.

“The island is a shell of what it once was,” explained LDWF non-game ornithologist Michael Seymour.

“It has subsided significantly and is mostly open water. The idea is to restore the island on top of the existing island footprint. The restoration plan prescribes to place sediment on top of the island to increase the elevation and conduct some targeted planting with wetland vegetation that makes ideal nesting substrate. It’s going to be quite the colony. Hopefully, back to what it was many years ago,” he concluded.