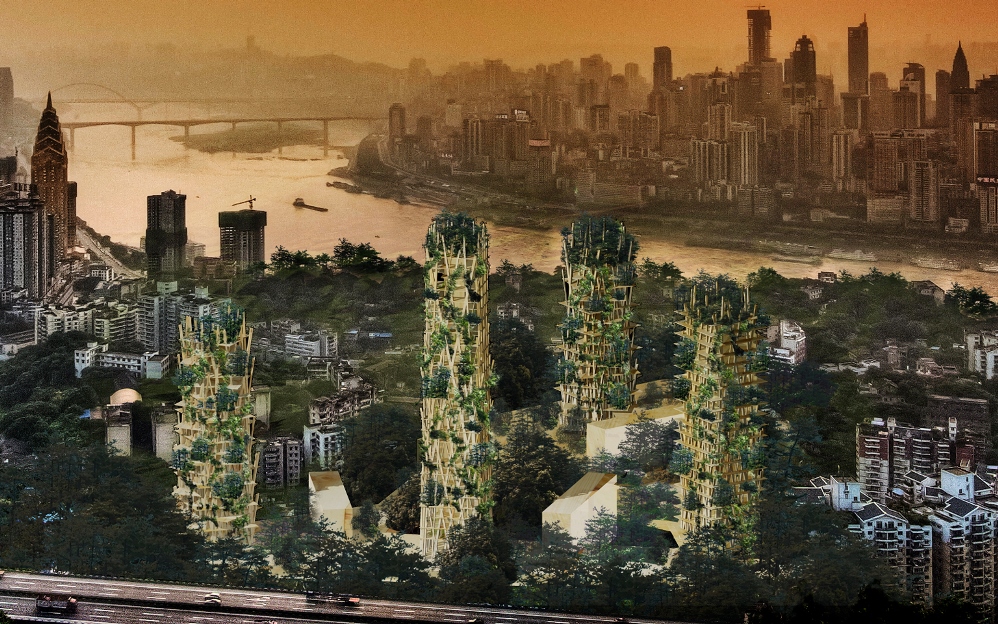 A hutong is a type of narrow street or alleyway, commonly associated with northern Chinese cities, especially prominently Beijing. 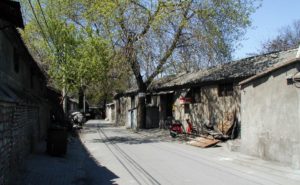 In Beijing, hutongs are alleys formed by lines of siheyuan, traditional courtyard residences. Many neighbourhoods were formed by joining one siheyuan to another to form a hutong, and then joining one hutong to another. The word hutong is also used to refer to such neighborhoods.

Since the mid-20th century, a large number of Beijing hutongs were demolished to make way for new roads and buildings.

More recently, many hutongs have been designated as protected, in an attempt to preserve this aspect of Chinese cultural history. 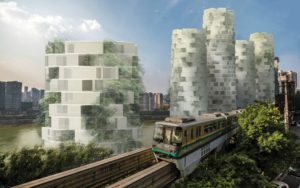 Now, NO ARCHITECTURE has proposed what they call a “vertical hutong“.

Conceived around a series of cascading shared walls, ventilated courtyards, stepped terraces, and wind towers, these new vertical organizations re-connect urban living to nature, suggesting how we can live in close proximity today, and can continue to do so sustainably for generations to come.

In contrast to the dominate urban typology in China of isolated, monotonous towers disconnected from nature, this project re-conceives high-rise urban living by organizing each apartment tower around an aggregation of sustainable techniques sampled from different climates, cultures, and contexts: from shared walls and ventilated courtyards, to stepped terraces and wind towers. 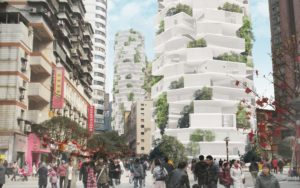 Externally, each floorplate is expanded by 30% to accommodate exterior gardens. Internally, 30% more living space is created, because no room is isolated and compartmentalized; every room becomes a living space during the day and a sleeping space at night. 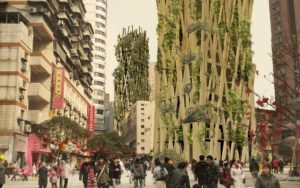 Each apartment’s spaces flow in a continuous loop around a series of separate bathroom and storage cores that flock and disperse to allow the rooms to be experienced as a single loft or as a series of individual rooms.

Maximizing usable space while minimizing poché, each storage core contains all of the requirements of daily living—WC, shower, closets, etc.—allowing each room to be experienced collectively when open or privately when closed.

NO ARCHITECTURE is an internationally award-winning practice based in New York City dedicated to the radical exploration of nature, ecology, and urbanism through innovative architecture. The office’s expertise is in new forms of organization in architecture and urbanism: from programmatic differentiation at the scale of a room, to new ways of living convivially and resiliently at the scale of a city. 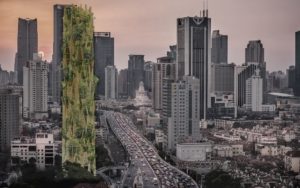 The office is involved in a diverse range of projects that include a lake house in the Allegheny Mountains; the Courtyard House, recently featured in AD Germany, Architectural Record, Dwell, and Wallpaper*; 75 First Avenue, a residential condominium tower in Manhattan; 865 UN Plaza, a residential commission featured on the cover of Casa da Abitare; This Is Not A Park, a proposal for a new public park in Berlin, which the Union Internationale des Architectes awarded the Japan Institute of Architects Prize; Snow Mound, a land art installation for Rauma, Finland completed in 2010.

In addition, NOA’s design proposal for New York’s High Line Park received the New York Heritage Lady Bird Wildflower Award. The office focuses on understanding how the world was organized in the past and present, in order to understand how the world can be organized in the future, liberating the actual space for the physical and direct communication between people.

Andrew Heid is the founding principal of NO ARCHITECTURE. In 2011, PIN-UP Architecture Magazine featured Andrew as one of the ten up-and-coming architects in New York City. Currently, he is an adjunct assistant professor at the New York Institute of Technology’s School of Architecture and at the GSAPP at Columbia University, and has been an invited juror at Harvard, The Cooper Union, The Institute for Architecture and Urban Studies, NJIT, Pratt, Parsons, Temple, and UCLA. He recently, exhibited and lectured in China on NOA’s work at the Shenzhen Design Forum & Exhibition 2011.

Andrew studied architecture at Yale, the Architectural Association, and Princeton, where his design thesis earned the Suzanne Kolarik Underwood Prize, the graduate school’s highest honor. From 2005-2008 he practiced at REX and O.M.A. in New York and Rotterdam. Before starting NOA, Andrew was the lead architect with Rem Koolhaas at O.M.A. for a 303,454 m² “icon” tower commissioned for Tunis, Tunisia. Also at O.M.A., Andrew worked on the design for the Dee and Charles Wyly Theatre in Dallas, Texas. At Princeton, he designed and edited a book with the prominent architect and educator Peter Eisenman, titled, Ten Canonical Buildings: 1950-2000, Rizzoli 2008. In addition to the Shenzhen Design Forum & Exhibition, his work has been exhibited in the Beijing Architecture Biennale and MoMA.