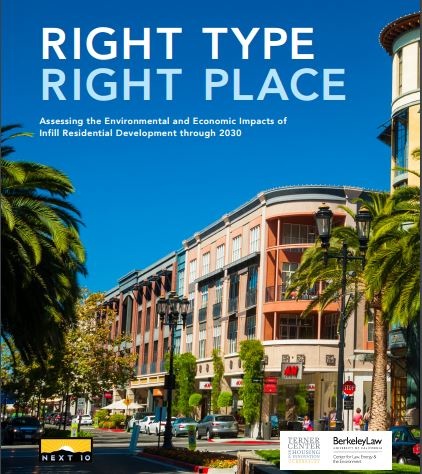 California’s long-term economic prosperity and environmental sustainability will depend on how much and where housing gets built in the state. So says a new, 68-page report from the University of California, Berkeley titled RIGHT TYPE, RIGHT PLACE: Assessing the Environmental and Economic Impacts of Infill Residential Development through 2030.

Residents in the largest coastal cities in California encounter some of the most unaffordable homes in the nation, caused in large part by a thriving economy and a multi-decade-long undersupply of housing relative to population and job growth. In addition to the income squeeze of unaffordable homes and long commutes, the housing shortage creates environmental challenges. Most prominently, building more auto-dependent housing far from job centers generates more traffic and air pollution while destroying open space and agricultural lands. Furthermore, these development patterns undermine that state’s long-term greenhouse gas reduction goals, including newly legislated 2030 targets.

California instead could meet long-term economic and environmental objectives by building the right type of housing in the right places. That means homes that allow for reduced driving, as well as less energy and water usage, with compact development near transit, goods, and services. Other than one industry-based analysis, California has lacked an objective and comprehensive assessment of the potential economic and environmental impacts of new housing production on the state’s 2030 climate goals.

To address this research gap, the Center for Law, Energy, and the Environment (CLEE) at UC Berkeley School of Law and the Terner Center for Housing Innovation at UC Berkeley (collectively the “Centers”), with support from Next 10, prepared this report to assess the environmental and economic impacts of housing production scenarios that could help meet the state’s proposed 2030 greenhouse gas reduction target under Senate Bill 32 (Pavley, 2016). This report also offers best practices and policy recommendations for state and local governments to boost housing production within California’s existing urban footprint. The Centers have assessed existing data and consulted with development experts to quantify the costs and benefits of a 2030 growth scenario that can inform state and local policy going forward.

Of the three housing production scenarios analyzed, the Centers found that the infill-focused housing growth scenario provides the best outcomes for meeting the state’s climate goals while also producing economic benefits. This scenario could help avert at least 1.79 million metric tons of greenhouse gases annually compared to the business-as-usual scenario, based on reduced driving miles and household energy usage alone. That number is equivalent to:

Together with other land use changes that this housing scenario could stimulate, the savings would help the state meet its goals of reducing emissions from a projected 431 million metric tons in 2020 to 260 million metric tons by 2030, as required by state law. The infill scenario produces slightly higher annual economic growth, more tax revenue, and lower overall construction costs than business-as-usual growth. Meanwhile, the average household would see lower overall monthly costs through reduced transportation and utility bills from living in infill neighborhoods. Furthermore, infill households would drive roughly 18 miles less per weekday than non-infill households.