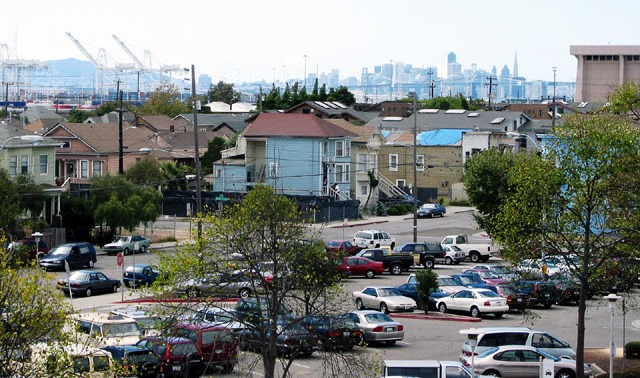 West Oakland, California sits directly across the water from San Francisco, putting it effectively in the center of the Bay Area. It’s bounded on all sides by freeways — the 880, 980, and 580 — and hugs the Port of Oakland.

The bustling docks hold the distinction of being the city’s economic heartbeat…and its worst enemy. 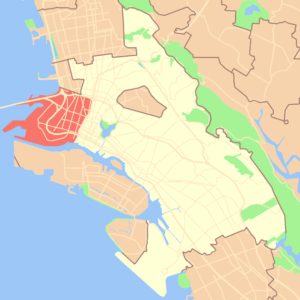 West Oakland is in red.

Adjacent to the port is the former Oakland Army Base, which was shut down in 1999. For more than a decade, both the port and the city of Oakland, which divided the land, have contemplated how to repurpose the 310 acres — an area twice the area of the National Mall in Washington DC.

The city has considered a Costco, a casino, and an auto mall. At one point the famous Wayans brothers even proposed a movie studio and amusement park. The city and port eventually settled on a mix of warehouse complexes and shipping infrastructure that will expand the capacity of the port — currently the fifth busiest in the country.

But more warehouses and shipping mean more trucks, and that all leads to more pollution. And air pollution-related deaths from heart disease, stroke, and lung cancer are already higher in West Oakland than in both the rest of the city and county. 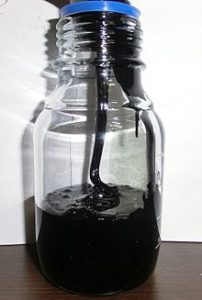 Emission sources include diesel trucks and buses, locomotives (cargo and passenger trains), harbor craft (like tugs, ferries, fishing vessels), diesel equipment at the port and railyards, plus ships (cargo and cruise, both of which use bunker fuel, the filthiest form of diesel oil). And that’s on top of the automobile emissions from the surrounding highways.

This spring, the West Oakland Environmental Indicators Project, a community group cofounded in 2004 by Beveridge and Margaret Gordon, filed a federal civil rights complaint against the city and the port.

Aided by attorneys at Earthjustice, the group alleged that the city of Oakland has, for decades, systematically ignored input from West Oakland residents, favoring industry over the community’s health. But this is just the latest in a long, tragic history of injustices.

In 1957, freeway construction obliterated whole blocks and physically divided the area, just as highway planners were doing in vibrant, low-income / ethnic minority neighborhoods nationwide at that time. Over the next two decades, a giant post office distribution center and an elevated Bay Area Rapid Transit station wiped out even more homes and businesses, including many along their historic 7th Street.

Since redevelopment of the military base has already begun, some say the lawsuit is too late. Others feel it’s never too late to restore justice.