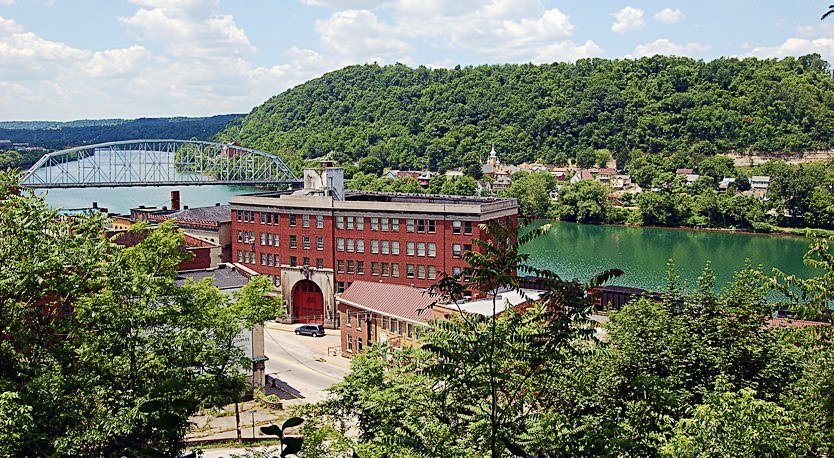 In Brownsville, Pennsylvania—which sits about 40 miles south of Pittsburgh—barges have been built on a 43-acre site since the 1940s. 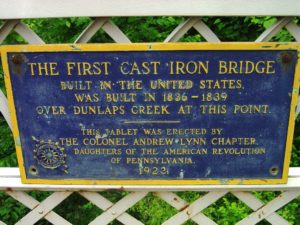 Brownsville was also the site of the first cast iron bridge built in the United States, so—as with so much of the Pittsburgh area—iron and steel are central to its economic heritage. As is the coal that helps make and shape those metals.

The first company to do so was Hillman Barge, which then went through a series of different owners, all of whom ran into problems. One of them was Wilhelm & Kruse, which made the steel beams and columns of nearby PNC Park and Heinz Field. Those huge components were then shipped down the Monongahela River by the barges they also manufactured.

In 1940, 8015 people lived in Brownsville. But in the mid-1970s—after the OPEC oil embargo of 1973–74 triggered a recession, along with the restructuring of the steel industry and loss of industrial jobs—Brownsville suffered a severe decline, as did much of the Rust Belt.

The region has declined in population and vitality ever since, despite the recent resurgence of Pittsburgh. 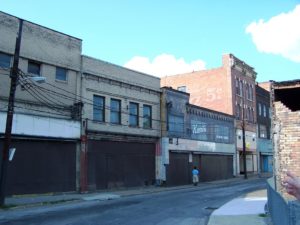 By 2000, the population had dropped to 2804, as younger people had moved away to areas with more jobs. In 2011, Brownsville has a handful of buildings that are condemned or boarded up. Abandoned buildings include the Union Station of the railroad, several banks, and other businesses. The sidewalks around the town are still intact and usable.

In 2005, that abandoned barge-building site became the source of new hope for the economic duture of the town. Columbia, Illinois-based Heartland Companies bought the site, and began making barges the following year, under the name Brownsville Marine.

The primary cause of this steep drop-off is the decline of the coal industry; most coal is shipped by barge in the U.S. Coal powered 30% of electricity generated in the U.S. last year, down from about 49% a decade earlier, according to the U.S. Energy Information Administration.

But unlike other coal-dependent companies, Brownsville Marine didn’t got whining to Washington, DC, begging the federal government to artificially resuscitate an energy source whose time has passed. Instead, they are rapidly adapting and evolving to this new economy, as any intelligent enterprise should.

But they aren’t dashing off into some risky, unrelated business, as so many panicked firms do. They are adapting their primary existing asset: their barge-making expertise and technology. They are seeking-out and serving markets that require those same skills for different products. That includes infrastructure, as as bridges, and forms of heavy construction. To reflect their new vision and strategy, they changed the company’s name to Heartland Fabrication.

They are now fabricating girders and other structural steel components for bridges and highways as well as water-related infrastructure built, maintained, and operated by the U.S. Army Corps of Engineers. All of these projects require bending, cutting, welding, and painting steel, as does manufacturing a 200-foot barge. 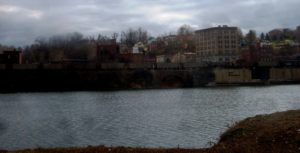 Brownsville from across the Monongahela River. Photo by VitaleBaby via Wikipedia.

This evolution required investment, of course. In 2012, Heartland pumped $25 million into revitalizing the manufacturing facility in Brownsville. This required the construction of a new rail spur, the purchase of the plasma torches needed to cut steel plate, and a new steel-bending press.

Ted Stilgenbauer, vice president of operations at Heartland Fabrication, knows this is the right thing to do. “We’re going to continue to invest in the facility,” he said. Hopefully, this also also the start of a turnaround for long-suffering Brownsville, as well. 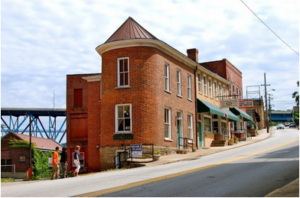 BARC’s offices are located in the historic Flatiron Building, located along the Monongahela River and the National Road Heritage Corridor in Brownsville’s Downtown Commercial Historic District. Since 1989, BARC has worked to improve Brownsville’s economy by restoring buildings in the downtown and utilizing other resources in the community.

Most recently, BARC has focused its efforts on what is dubbed “The Keystone Project” which addresses renovating both 25 & 27 Market Street, in the heart of downtown. BARC obtained these properties at a very reasonable price from a town resident who had faith in BARC’s mission and capacity to breathe new life in to Brownsville’s downtown.

Upon receiving these properties, BARC committed to remediating them and turning the blighted properties into aesthetically pleasing structures that will contribute to rebirth of Brownsville’s urban core.

See article by Len Boselovic in the Pittsburgh Post-Gazette.