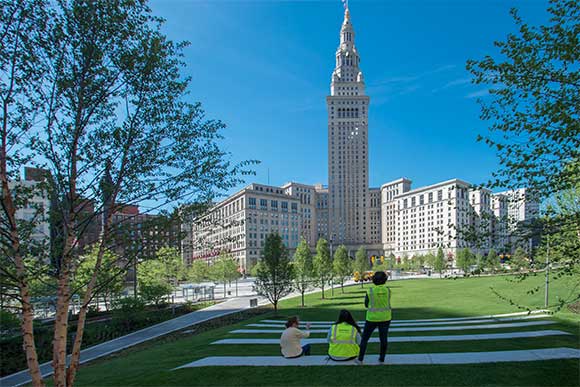 As the refurbished statues of Moses Cleaveland and 1901 mayor Tom Johnson overlook Cleveland, Ohio’s Public Square, one would think that the pair would be impressed with the modern transformation of the plaza that originally served as a common pasture for livestock and later a grid for moving from point A to point B within downtown’s epicenter.

Almost complete, the fences that have been hiding Public Square since renovations began in March 2015 will soon come down and a new six-acre green space will be unveiled before the Republican National Convention begins July 18, 2016.

But the revitalization was not solely for the sake of the convention, says Nora Romanoff, senior project director for LAND studio and part of the Group Plan Commission charged with transforming the heart of Cleveland’s downtown.

“We didn’t just do it for the RNC,” says Romanoff. “We did it for Cleveland.” 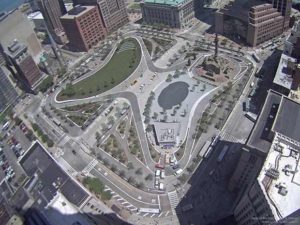 “The goal of [the project] was to re-invigorate the historic center of Cleveland – a center point that held so much untapped potential,” explains Veronica Rivera, project manager and an associate with the design firm James Corner Field Operations (JCFO).

The plan for a new Public Square has been years in the making. LAND studio initiated a conversation about it back in 2003, but it wasn’t until 2010 that officials started to move forward on the $37 million project.