Mott Haven is a primarily residential neighborhood in the southwestern section of the Bronx borough in New York City. It has long been known for its environmental justice issues (such as asthma from nearby industry and power plants), and for its high crime rates.

It’s a high-density neighborhood with a population around 53,000. The residents are 72.3% Hispanic/Latino, 24.7% Black or African American, 1.7% White, 0.4% Asian, and 1% as multiracial or other. Like most neighborhoods in New York City, the vast majority of households are renter-occupied. The neighborhood is largely Puerto Rican, with smaller numbers of African Americans, Mexicans, and Dominicans present. 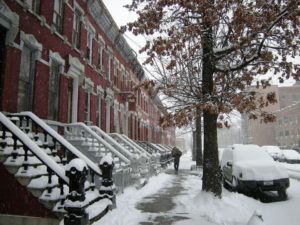 Over the past two decades, construction of modern 2- and 3-unit rowhouses and apartment buildings has increased the percentage of owner-occupiers. The total land area is roughly one square mile.

The South Bronx has long struggled to shake one image in particular. It was the 1977 World Series at Yankee Stadium, and ABC sportscaster Keith Jackson interrupted his commentary to describe an abandoned building engulfed in flames.

The phrase “the Bronx is burning” became a shorthand for urban decay. But these days, the Bronx is gentrifying — bringing its own kind of unrest.

Developer Keith Rubenstein sees this area as up-and-coming, and he aims to make that a self-fulfilling prophecy. Besides his real estate business—which controls $2 billion worth of residential and office property across the country—the 52-year-old Highland Park, New Jersey native and father of three, recently took over the U.S. division of KidZania, a Mexico-based franchise that operates miniature indoor cities for kids in malls across the country.

Part of the reason for his confidence in the future of Mott Haven is a city plan that calls for revitalizing the area through private investment. Rubenstein said that’s exactly what he’s doing. When he’s done, he says his projects will create a “great place for people to live, and a great place for people to come and use the retail and waterfront esplanade.” 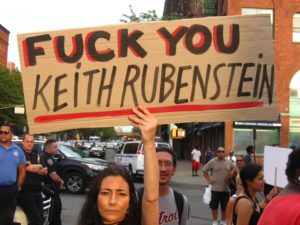 Some say Rubenstein’s public engagement skills could be improved. Photo via Hyperallergic

But locals variously accuse Rubenstein of being arrogant, aristocratic, and/or socially tone-deaf. First he tried to brand his development the Piano District — after old piano factories that used to be here. Residents accused him of trying to invent a new neighborhood.

Later, as a promotion, he hosted a star-studded party, with a “Bronx is burning theme,” with flaming trash cans and a car with bullet holes as decor. Local resident John Matos said he found the party offensive, and he certainly wasn’t alone in that sentiment.

Since then, Rubenstein has made an effort to buy goodwill with locals by financially backing new businesses in the area, like fashion boutique 9J, a coffee spot called Filtered Coffee, a boxing gym, an Italian restaurant, La Grata, a soon-to-open art and design accelerator, as well as cultural organizations like Bronx Artspace and the Bronx Museum.

“I see my role as being a developer, and a developer that can act responsibly at the same time by helping to support locals in the community,” he said. “If anyone’s benefiting from all of this stuff, it’s the people who are here.”

He’s currently moving forward with his seven-tower, 1300-unit market-rate project in the adjacent Port Morris neighborhood, a run-down former industrial waterfront. It will include a new public park on the waterfront: no small thing for a neighborhood that has long been isolated from its water by a combination of industrial development and bad planning.

The question for many people here is, when the new Bronx is built, whether they will be part of it.