Eau Claire, Wisconsin sits on the banks of the Eau Claire River, where it meets the Chippewa River. In many ways, Eau Claire is no different from so many other American post-industrial industrial towns in the upper Midwest. But it’s different in at least one crucial aspect: it’s a real city with a charming small-town feel.

Eau Claire was founded in the mid-19th century, and lumber drove its early growth. At one time, there were 22 sawmills operating in the city. 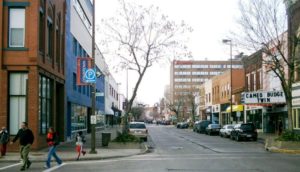 Downtown Eau Claire in 2005.Photo by anonymous via Wikipedia.

Manufacturing took over in the early 20th century and sparked an extended boom. But by the 1980s, the town’s economic fortunes were shifting. In 1992, the Uniroyal tire plant closed, putting more than 1,350 out of work.

More recently, the economy was reshaped by the opening of a number of plants engaged in the construction of computer hardware, such as Hutchinson Technology‘s largest plant. Eau Claire is also home to IDEXX Computer Systems, a division of IDEXX Laboratories.

As with many smaller cities, retail started to shift to the city’s edge. By 2002, when Eau Claire journalist Nick Meyer founded the local culture magazine Volume One, “downtown had been left for dead,” he says.

But Eau Claire began to reawaken. City officials started cleaning up blighted properties on the waterfront, and in 2003, Royal Credit Union, a local banking outfit that once serviced Uniroyal employees, chose an old industrial site at the rivers’ confluence for its new headquarters.

The city quickly built a showcase park on the water across the street. With a gorgeous setting, a Saturday farmers’ market, and a concert series, the aptly named Phoenix Park gave downtown signs of life. 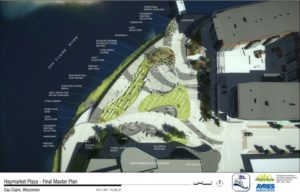 The tipping point came in 2012: Arts advocates, the city, the state, and the University of Wisconsin-Eau Claire (UWEC) joined forces on the $85 million Confluence Arts Center.

When it’s completed next year, across from Phoenix Park, it’ll have two theaters, apartments, retail space, and a pedestrian plaza, along with artist and technical training facilities.

But Eau Claire’s biggest project is still in the planning stages: a 34-acre riverfront recreation and sporting complex to be shared by UWEC, the local YMCA, and the Mayo Clinic.

Eau Claire’s population, approaching 70,000, has increased nearly 18 percent since 1990: The town is now growing faster than all Wisconsin cities except Madison.