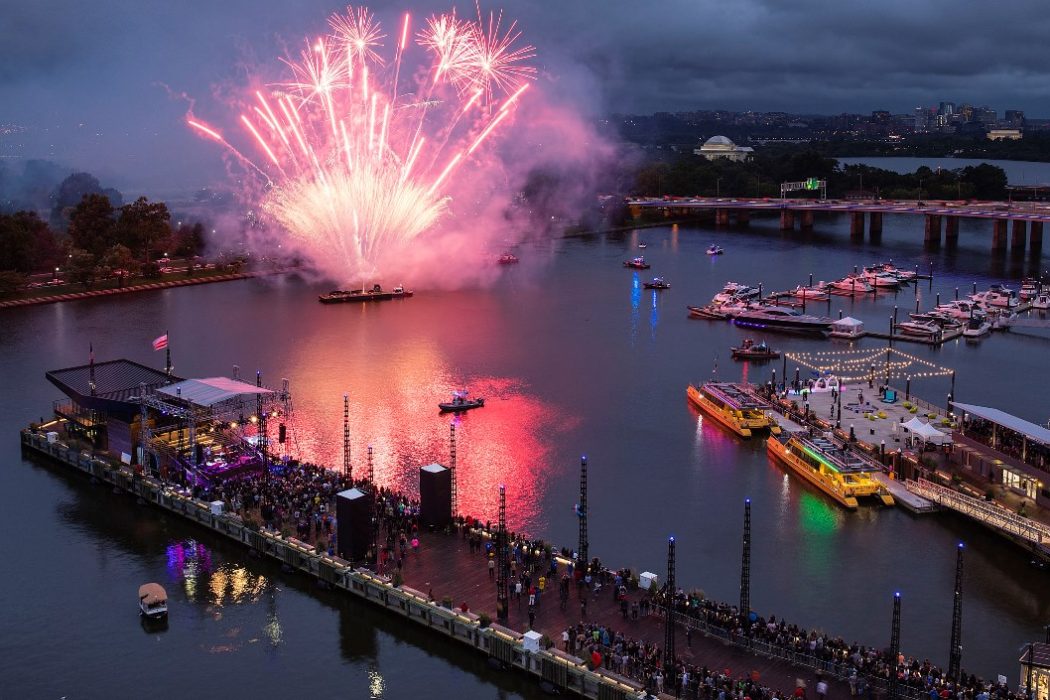 On October 12, 2017 something happened that I (Storm) and millions of other DC-area residents have long awaited. Phase 1 of The Wharf opened to the public.

In the process, it reactivated a tired, sad stretch of badly-planned waterfront, and reestablished Washington, DC as a true waterfront city and destination. 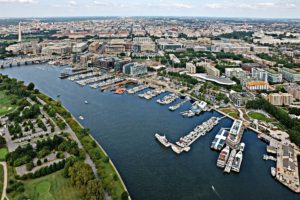 Aerial view of The Wharf.Photo credit Sofia Royce / The Wharf.

I was happy to see the large amount of residential capacity. Too many waterfront developments (especially those done by “new urbanists”) turn out to be sterile and hyper-commercial, with only a bare minimum of residences.

As anyone who has heard one of my talks or workshops knows, the three most powerful “universal” revitalizers are water, residents, and transit. The Wharf boasts ample quantities of all three. 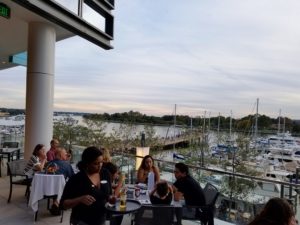 South Potomac Park is across the water, and a new free water jitney takes Wharf visitors to it from the pier you see here (a long-needed connection). Photo: Storm Cunningham

The $2.5 billion, 3.2 million square foot waterfront neighborhood features new residential, office, hotel, shops and restaurants, cultural, marina, and public uses, including 10 acres of public waterfront parks, promenades, piers, and docks, all designed by one of the most impressive lineups of architects in the nation.

The mix of uses offers something for everyone, with an incredible mix of best-in-class brands, local favorites and renowned chefs and shops.

The Wharf is the largest waterfront development in the nation and the first significant redevelopment in Southwest D.C. in more than 50 years, drawing inspiration from waterfronts around the world and designed to bring the community to the water’s edge. 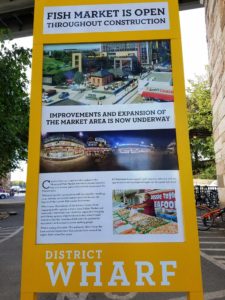 Another aspect of this massive revitalization effort is that the shabby-but-much-beloved fish market is being sensitively renewed. Many locals were holding their breath, having been traumatized by power-crazed urban planners in the past.

For instance, decades ago, planners tried to tear down the gorgeous Old Post Office (now a Trump Hotel) just because it didn’t match the other buildings in the Federal Triangle master plan. As a result, we were half expecting them to take a similar tabula rasa approach to the fish market. More intelligent, sensitive heads apparently prevailed.

The Wharf impacts the region in many ways from generating funding and employment opportunities, creating sustainable infrastructure, incorporating public spaces, reconnecting people to the waterfront, and making the region more accessible. Built as a public-private partnership that began more than a decade ago, this monumental waterfront neighborhood opens with a six-month long celebration of events and public activities, which began with a four day celebration on October 12-15, 2017.

During the Kickoff Celebration Weekend on October 12-15, The Wharf hosted free concerts on three outdoor stages and strolling entertainment, art exhibits and more, with more than 50 entertainers. The headlining event was a free, public concert on District Pier with one of my favorites, The Bacon Brothers, the folk rock soul country band made up of award-winning actor and singer Kevin Bacon and his brother, Michael. 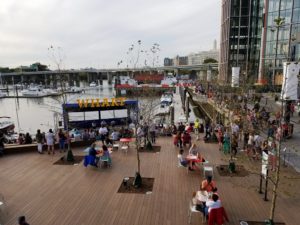 Through the construction of The Wharf there has been an expansion in the usage of the waterfront from a previously private, fenced off boat parking lot to an active harbor with public access across the entire site in addition to upgrades made to all existing facilities.

“After working more than a decade to make The Wharf a reality,we are honored to open this incredible, thriving waterfront neighborhood to the public,”says Monty Hoffman, Founder and CEO of PN Hoffman. “The Wharf is a world-class destination that offers something for everyone, from music to great food and drinks, many ways to connect and play on the water to phenomenal free events at the new parks and piers.” 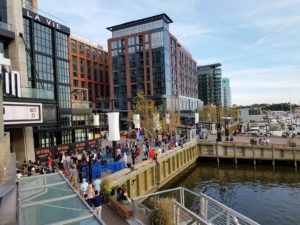 The Anthem is at far left.Photo credit: Storm Cunningham

Here are just a few of the amenities already in operation at The Wharf: Anthem, a concert and events venue with a variable capacity from 2,500 to 6,000 people.

Nearby Pearl Street is a cobblestone, pedestrian-friendly street with bars and innovative food concepts along with live music playing every night from such intimate venues lining the street as Pearl Street Warehouse, Union Stage, and Kirwan’s Irish Pub. 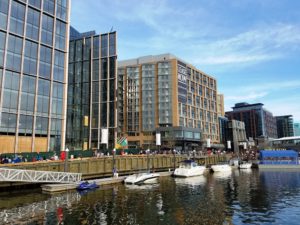 With 868 residences across four distinct buildings, there is plenty of opportunity to call The Wharf home. From distinctive condos for sale to amenity-rich apartments for rent, these residences offer spectacular views of the Potomac River and national monuments.

The Wharf residences include VIO and 525 Water (condominiums) plus Incanto and The Channel (apartments).

The Wharf offers a one-of-a-kind selection of places for visitors to stay, with iconic views and an easily accessible location to see and explore the sights of the city. Hotels include the first Canopy by Hilton hotel to open in North America, Hyatt House, an extended-stay hotel, and the InterContinental Hotel. 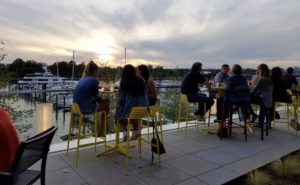 Enjoying a drink at the Hyatt at sunset.Photo credit: Storm Cunningham

I was especially impressed with the way the Hyatt House designed massive elevated public spaces and dining areas to plumb maximum value from the water and park views.

Here’s a recap of the numbers involved in this ambitious and successful redevelopment:

Of course, any urban project of The Wharf’s size is going to attract criticism, and The Wharf is no exception. A December 19, 2017 article in Planetizen by Jerrod A. Laber claims that the project has made the city’s affordable housing crisis worse, and that it profited at the public’s expense thanks to political connections. Here’s a brief exceprt from that article: “The average rent in Washington, D.C. is $1,899 a month. The Wharf currently features two separate apartment complexes, with 649 apartments total. The Southwester reports that 131 of those apartments are ‘affordable apartments for households earning 60% and 30% Area Median Income or less.’ That might seem admirable, but the deal developers received from the city government makes it less so.”

Laber’s article continues: “The land that The Wharf sits on was previously public property. Appraisers valued the property worth $95 million. An investigation by WAMU 88.5 found that the city sold the land for $1. The municipal government also distributed an almost $200 million subsidy to developers. The WAMU investigation found further that development teams in D.C. that get the most lucrative land deals are also the largest donors to city officials from their industry over a ten-year period. Ben Soto, the head of one firm involved in The Wharf, is Mayor Muriel Bowser’s campaign treasurer. He was also head of a political action committee that shut down for raising uncapped contributions from individuals who had access to Bowser. Developers deny receiving special treatment.”

Washington, DC has been rapidly climbing out of its long, well-deserved reputation of a place with great wealth, power, and beauty in the center, surrounded by poverty, desperation, and danger in very close proximity. The Wharf is a spectacular example of high-quality developer-driven redevelopment, and is a balance to the citizen-driven revitalization happening not far away at the 11th Street Bridge Project.