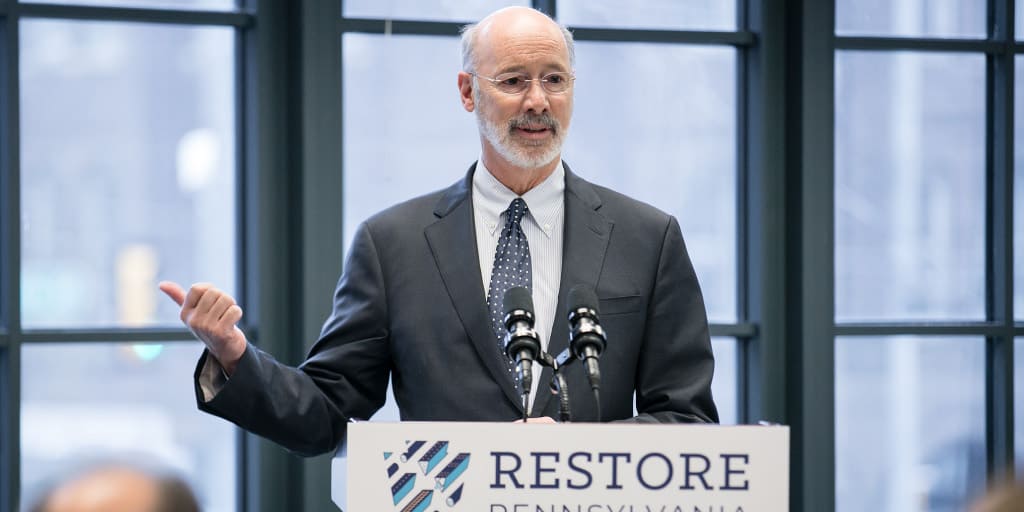 On March 20, 2019 in York, Pennsylvania—in an announcement that sounded like it came straight out of The Restoration Economy—Pennsylvania Governor Tom Wolf outlined the components of the most aggressive infrastructure plan in generations, Restore Pennsylvania, which was initially announced in January of 2019.

“My vision for Pennsylvania includes vibrant towns and cities with new development, opportunities in rural and disadvantaged areas, and a modern, interconnected commonwealth,” said Governor Wolf.

“So many communities deserve the infrastructure attention needed to create a bright economic future for residents and businesses. Unfortunately, after decades of neglect and declining federal investment, Pennsylvania is falling behind, and we need an aggressive plan to get us back on track,” he added.

To achieve these goals, Governor Wolf announced the ambitious Restore Pennsylvania infrastructure renewal initiative, funded by the monetization of a commonsense severance tax on the natural gas industry. Restore Pennsylvania will invest $4.5 billion over the next four years in significant high-impact projects throughout the commonwealth to help catapult Pennsylvania ahead of every state in the country in terms of technology, development, and infrastructure.

Restore Pennsylvania will increase resources for addressing blight by providing financial resources at the local level to establish land banks and acquire and demolish blighted buildings in order to create new development opportunities or provide new green space. The funding will be administered by entities established by the legislature as land banks or demolition funds.

“We are using the tools given to us, but they simply are not sufficient to do the job properly,” said York County Commissioner Doug Hoke. “I’m certain the other 66 counties of PA join York County in needing assistance to modernize our public infrastructure and eliminate blight, to restore our communities and bring them into the 21st Century. Restore PA is doing what the state should do, lead in creating solutions and not leaving it up to local communities or residents to undertake more burden on local property taxes.”

In York, the governor outlined how Restore Pennsylvania will help the city and York County address blight. There are approximately 500 to 700 blighted properties in York County, and the municipalities where these properties are located are not able to fund the demolitions themselves. 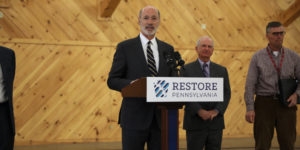 “Blighted homes threaten residents’ health and safety, cost local governments for enforcement and maintenance, reduce property values and tax revenue, and make communities less attractive for investment,” said Governor Wolf. “Some of these blighted properties are in desirable locations but a lack of funding has prevented communities from large initiatives that would allow them to be redeveloped. Restore Pennsylvania is needed to property support our communities.”

“It is far past time that Pennsylvanians stop allowing our commonwealth to be the only state losing out on the opportunity to reinvest in our communities,” said Governor Wolf. “And as long as that is allowed to continue – my vision of a restored Pennsylvania that is ready to compete in the 21st century economy will never become reality.”

Encompassing new and expanded programs to address five priority infrastructure areas outlined below, Restore Pennsylvania projects will be driven by local input about local needs. Projects identified by local stakeholders will be evaluated through a competitive process to ensure that high priority, high impact projects are funded and needs across Pennsylvania are met.

Restore Pennsylvania will provide funding to completely bridge the digital divide in every community in Pennsylvania, making Pennsylvania a better place to work, do business, and live. Grants will be available to support installation of infrastructure to bring high speed internet to every corner of the commonwealth. Funding will support every phase of the process from feasibility testing to connection.

Resilience: Critical Flood Control Infrastructure Restore Pennsylvania will provide funding for flood prevention that will protect against severe weather and save homes and businesses in flood prone areas across the state. Restore Pennsylvania will provide funding to help towns and cities prepare for flooding and severe weather, upgrade flood walls and levees, replace high-hazard dams, and conduct stream restoration and maintenance.

Helping Families Rebuild Restore Pennsylvania will establish a disaster relief trust fund to assist individuals who suffer losses that are not compensated by the Federal Emergency Management Agency or other programs.

Stormwater Infrastructure Restore Pennsylvania will provide grants to municipalities moving forward with Pollutant Reduction Plans to help them implement creative solutions to comply with their stormwater mandates and transform their communities. Additional state funding will reduce the need for new stormwater fees, which have proven unpopular where they have been proposed. Additional incentives will be provided for communities that are working collaboratively with their neighbors to tackle the problem in the most efficient manner possible.

Demolition, Revitalization, and Renewal Restore Pennsylvania will increase resources for addressing blight by providing financial resources at the local level to establish land banks and acquire and demolish blighted buildings in order to create new development opportunities or provide new green space. The funding will be administered by entities established by the legislature as land banks or demolition funds.

Brownfield Clean-Up Restore Pennsylvania will provide funding to ensure the continuation of Pennsylvania’s Brownfields program, ensuring that more sites can be returned to use for recreation, or returned to the tax rolls as commercial, residential, or industrial sites.

Contaminant Remediation Restore Pennsylvania will fund expanded efforts to remove lead and other contaminants from communities.

Restore Pennsylvania will provide funding for local road upgrades, create new flexible funding options for businesses that need local infrastructure upgrades to enable development projects, and multimodal and large-scale capital projects for transit. It will accelerate progress of projects to resurface, repave and repair four-digit roads and provide technical assistance and funding for dirt and gravel roads throughout the state.

Many members of the legislature recognize the need to invest in communities across Pennsylvania. “As the Democratic chairman of the House Finance Committee, I appreciate the difficulty behind fairly and effectively raising revenue,” said Rep. Jake Wheatley. “This is a reasonable severance tax, with exciting new ideas on how to maximize our investment. That’s why I’m pleased to be one of the prime sponsors of this legislation, along with looking forward to working with the governor and my Republican colleagues to finally get this done.”

“Restore Pennsylvania is a bold and innovative plan to inject billions of dollars into infrastructure projects across the commonwealth through a fair severance tax,” said Senator John Yudichak. “I applaud Governor Wolf for working in a bipartisan fashion to craft a plan that will benefit all Pennsylvanians.”

“We can no longer afford to lose billions of dollars by not having a sensible severance tax on drillers,” said Senator Tom Killion. “I thank Governor Wolf for his strong leadership on this issue. I am proud to work with Senator Yudichak on passing the governor’s proposal in the senate. Let’s finally get this done for Pennsylvania’s families.”

UPDATE: And now for the bad news.

The downside of Restore Pennsylvania is that it makes the state financially dependent on another two decades of toxic, environmentally-destructive natural gas fracking. While natural gas burns cleaner than oil, it’s every bit as damaging to the global climate.

A couple of weeks ago, the Pennsylvania press started reporting the results of the August poll from the Center for Opinion Research at Franklin & Marshall College. One of the results that grabbed headlines was the broad support the poll found for Governor Wolf’s Restore Pennsylvania plan. It made no sense. Restore Pennsylvania is Wolf’s $4.5 billion four-year spending plan that would lock us into 20 more years of drilling and fracking and would include fossil fuel subsidies. As the Center’s own March 28 poll indicated, 67% of Pennsylvanians believe that climate change is already causing problems and 68% support the government doing more to address it. It made no sense that 70% of Pennsylvanians would also support a climate-killing plan like Restore Pennsylvania unless the question didn’t adequately explain it.

This is the question that participants were asked. “Restore Pennsylvania is a plan proposed by the governor to help local communities improve storm water [sic] management to reduce flooding, eliminate blight, expand broadband access, and address other local infrastructure needs. Restore Pennsylvania would invest $4.5 billion over the next four years and would be funded by a severance tax on natural gas drillers that [sic]. Do you favor or oppose this infrastructure plan?”

No mention of the 20 years’ worth of severance tax dollars needed to pay for it. No mention of subsidies. Their question omitted exactly the same details Wolf regularly omits when he’s touring the state to sell his plan.

We emailed the Center to ask them to remove the results and make a public statement explaining why. The Center’s director Berwood Yost responded by saying that he would share the important points we’d raised with the Center’s media partners, whatever that means. We asked if he’d also do what we were actually asking him to do. Here’s his response:

“I’m sorry, but I will not be pulling the results of the survey. The survey was designed to test the broad themes of the Governor’s proposal, which it does. I don’t doubt that follow-ups that test additional components of the plan might change reactions to it, but I think a large amount of polling has made clear that citizens want more spending on infrastructure as well as a severance tax. The poll’s results are in line with those findings.”

In other words, he asked the question in a way that would elicit the results he expected and admitted that providing additional details might have changed the results.

We wrote the President and Board of Trustees of Franklin & Marshall to call on them to direct the Center to meet our demands. We’ve gotten no response. Perhaps it’s because Governor Wolf’s wife is a Trustee.

Earlier this week, I was interviewed for a story on the Better Path Coalition’s efforts to get legislators to remove their names from the list of co-sponsors of the Restore Pennsylvania legislation. Sure enough, Governor Wolf’s spokesperson was asked for reaction and cited the results of the poll.

Please tell Franklin & Marshall that they need to remove the results, explain why, and explain what, if any, role Mrs. Wolf’s position on the Board of Trustees had to do with the question making it into the poll in the first place. Sign petition #1.

Oh, and the other petition I mentioned is the one that calls on Wolf to investigate the spike in rare childhood cancers being diagnosed in the shale fields of southwestern PA. If you haven’t already signed, please do. The two petitions are not unrelated. Communities in the shale fields can’t take 20 more years of drilling, fracking, pipelines, and petrochemicals.

Some of the children who died never got 20 years. Sign petition #2.