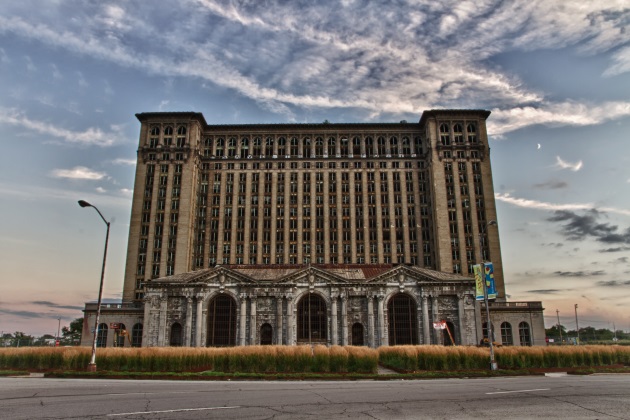 Detroit has been gathering momentum since the city collapsed into bankruptcy in July 2013.

Now, two years on from that nadir, which was the largest municipal collapse in US history, downtown Detroit is in the midst of a mini-boom: vacancy rates are falling, rents are rising, new businesses are moving in, abandoned towers are being refurbished and new development is under way. The unemployment rate has fallen to 10% – still twice the national average, but well down on the peak of 28% during the financial crisis, when president Obama was forced to bail out the automobile industry that is the Motor City’s lifeblood.

“Young people are crucial to what’s happening here,” says Sue Mosey, the president of Midtown Detroit Inc., an economic development company that has been driving the regeneration of the city’s Midtown. “We’re benefiting from the same dynamic every city in America is benefiting from, which is the millennials really wanting to live in cities.”

Mosey, who has been leading the regeneration of Midtown for 27 years – and is seen by many as the district’s unofficial mayor – says there is growing interest from “major brands” wanting to set up in the area. This follows the arrival of Whole Foods Market in 2011 – “everybody thought that would be a disaster, but it’s been wildly successful,” she says – as well as other brands such as Will Leather Goods, craft beer restaurant HopCat and luxury goods manufacturer Shinola. The latter, founded by a Texan venture capitalist, is manufacturing and assembling its range of high-end watches, bicycles and leather goods in Midtown, as part of a strategy to trade on the Detroit brand and at the same time create job opportunities for locals.

Under the leadership of Mayor Mike Duggan – a man with a reputation as a Mr. Fixit – city hall has embarked on a turnaround strategy that has seen it work in closer partnership with the private sector to build confidence and attract businesses and residents back to the city – and the millennials have led the charge.

The city’s strategy is aimed at concentrating investment in key areas, such as Corktown and Midtown and the five other distinct neighbourhoods that form Detroit’s Greater Downtown area: a 7.2 square mile slice of the city that accounts for just 5% of the land mass, but more than 36% of the jobs.

Since 2006, more than $9 billion has been invested in property development in Greater Downtown, but over half of this ($5.2bn) has been invested since 2013. With around 85,000 employees, the one square mile Downtown is the city’s largest employment area and is home to established anchors such as General Motors, DTE Energy and software firm Compuware. Here the commercial office vacancy rate has fallen from 35.4% in 2011, the worst in the US, to around 16% today as a host of new occupiers are attracted to the city from the suburbs.

In all, Downtown has added 16,000 new employees since 2010, with the lion’s share arriving when the Quicken Loans group of companies brought around 12,500 employees to a new corporate campus five years ago. The online retail mortgage provider is owned by billionaire Dan Gilbert, who has been central to Detroit’s revival – not just as a result of its relocation to Downtown from the suburbs, but also through Gilbert’s extraordinary investment in the city. Since 2010, Gilbert has bought around 75 properties, many of which were vacant, in a $1.7 billion spending spree. These are now being refurbished and let to new occupiers.

Walking around Downtown you can see signs of Gilbert everywhere — his property arm Bedrock Real Estate puts ‘Opportunity Detroit’ stamps on the buildings it purchases and many are daubed with murals by street artists.

But Bedrock’s plans extend beyond refurbishing office space. One of the first buildings bought by Gilbert was the Madison Building, an historic theater that has been transformed into a thriving tech hub, with an incubator space and accelerator program – backed by Gilbert – that hosts dozens of start-ups as well as more established firms, including Twitter. The building, renamed the M@dison, is at the heart of Detroit’s burgeoning tech sector, which is benefiting from the growing ties with the auto industry. Gilbert plans to lay super-fast broadband Downtown as part of what he calls the Detroit 2.0 vision of reinventing Motown as a vibrant tech city, where digital technology, media and entertainment businesses can take root and thrive.

Ultimately, however, if Detroit is to truly recover it will need to resize itself, argues Bruce Katz, vice-president of the Brookings Institute and an expert on urbanism. The city’s long-term plan – dubbed Detroit Future City – envisions that whole neighbourhoods will be transformed into parks or agricultural land – or literally returned to their natural state – with a denser city concentrated around the Greater Downtown core. “Detroit is the quintessential shrinking city and now it needs to reinvent itself,” saysKatz, who likens the challenge facing Detroit to that of New Orleans after Hurricane Katrina. “Physically it’s going to be a very different city 50 years from now.”

Katz says Detroit’s focus on building a strong core is the right approach and believes the city is well placed to benefit from the new innovation economy, particularly the growing connection between the auto sector and advanced manufacturing and technology. “When cities revive, they tend to revive from the core – and over the next five years that is going to accelerate,” he says.