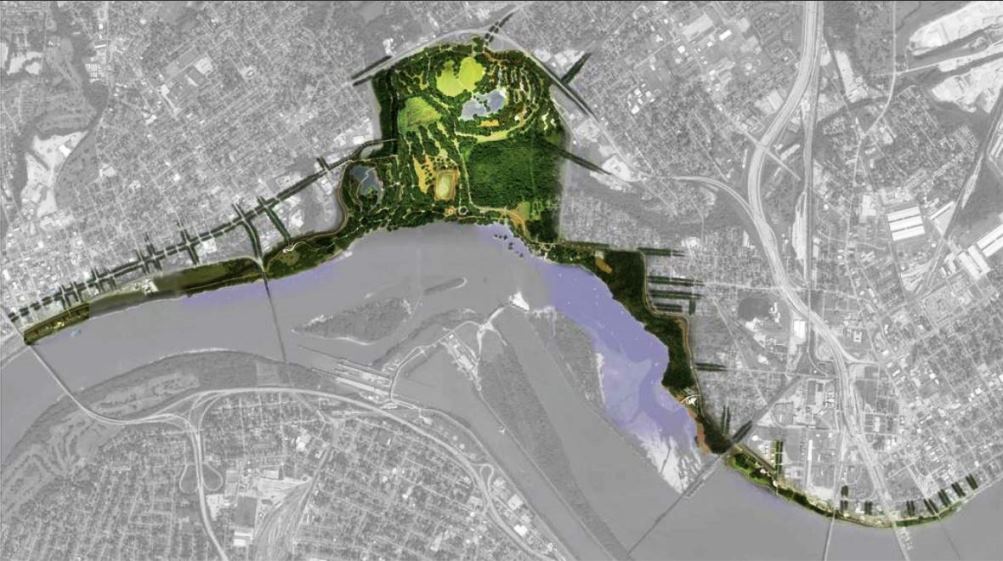 On January 23, 2019, the Philadelphia and Los Angeles-based landscape architecture studio, OLIN, was commissioned to design the redevelopment of 400 acres of mostly-fallow, contaminated land into a new public park in Southern Indiana, along the northern shore of the Ohio River.

The project will rehabilitate and transform an expanse of waterfront lands, which for decades have been occupied with landfills and industrial facilities, into a rich cultural and civic asset for Southern Indiana and the Louisville, Kentucky metropolitan area.

The project is being spearheaded by the River Heritage Conservancy, a non-profit organization dedicated to implementing and managing a world-class park system along the northern shoreline of the Ohio Riverfront. The Conservancy selected OLIN to lead the project after conducting a nationwide search for landscape architectural and planning experts.

“We live in an increasingly urban century for economic growth,” stated Kent Lanum, Chair of River Heritage Conservancy, “and our urban region’s vitality has always been defined by the majestic Ohio River. One of the best actions we can take today to shape a prosperous community for the future is to reimagine and activate this globally significant riverfront. While other communities are talking about parks, we’re busy building them. We will bring to the North Shore a beautifully designed public park that will shape future growth by building on our quality of place.”

Beginning in 2018, River Heritage Conservancy began working with natural resource managers and the philanthropic community to build consensus around one unifying landscape plan for open space downstream of the Falls of the Ohio. These partners subsequently committed to the creation of a new public park that will reinvent, reinterpret, and reactivate a section of the Ohio River that has, for over a millennium, functioned as the heart of the Ohio River Valley. River Heritage Conservancy continues to work actively with public and private landowners in the area to permanently set aside land for the future park.

The future park will encompass lands rich in ecological and cultural assets. The site was an important settlement for First Peoples in the region and was known as a key migration site for buffalo crossing the Ohio River. It sits downstream from the Falls of the Ohio State Park and the historic homestead site of Revolutionary War figure George Rogers Clark, and it will serve as a key anchor and destination point along the Ohio River Greenway, a seven-mile linear park along the river’s north shoreline.

Lucinda Sanders, FASLA, CEO and Partner at OLIN said, “The implications for this project are huge for this region. I see this park as a place that can transform people, particularly with regard to their relationship with nature—how they interact with, think about, and become one with nature. This is also a moment when Southern Indianans can claim their own identity—a park like this can demonstrate this region’s abundance, beauty, and pride to people across the country. We can’t wait to sit down at the table and roll our sleeves up with River Heritage Conservancy and local collaborators. We’re excited by the possibilities, and we’re eager to get started.”

The park is also being developed within the historically significant context of Louisville’s city park system, originally designed by Frederick Law Olmsted. While networks of large parks, by both Olmsted and others, have become a hallmark of the Louisville Metro region, this new addition will be the first major public park to link into this network from the Indiana side of the Ohio River.

The new park site is complex and has been dramatically shaped by both human intervention and the forces of nature. It lies within roughly 400 acres of brownfields, industrial parcels, landfills, wetland woods, and river camps. The site sits at the intersection of the Ohio River, Silver Creek, and the Ohio River Greenway, where the Indiana towns of Jeffersonville, Louisville, Clarksville, and New Albany meet.

The park will serve 1.2 million residents within a 30-mile radius. The entire site sits within FEMA’s 100-year floodplain and is bounded by a levee constructed after the catastrophic 1937 flood which devastated the region, particularly the towns of Jeffersonville and New Albany.

While the design is in its preliminary stages, key high-level aspirations for the project have been discussed. A wide diversity of passive and active programming will be considered as well as ecological regeneration and reforestation strategies.

“Our vision,” explained Sanders, “is that the park will be not just a public amenity, but that is will be, in essence, a purveyor of resilience. The mighty Ohio River creates the awe of this site. But it also has to be given the respect it deserves.”

OLIN and the team will begin by conducting a thorough analysis of the entire 400-acre site area, building from the foundation established by previous studies. The team will then interpret and lay out desired programming and longer-term goals for the park. From this, OLIN will begin developing design concepts for the park, which will be vetted by stakeholders and refined to a preferred concept before commencing schematic design. OLIN and River Heritage Conservancy are together committed to crafting an actionable design vision toward creating a treasured new asset on the shore of the Ohio River.

“The park will connect communities in our region with a wild, historic, and neglected, section of the Ohio River. Our region has always come together at this spot. From the post-glacial seasonal migration of huge herds of buffalo and elk, to the Native Peoples that gathered for trade, to African-Americans seeking to escape bondage in the antebellum era, and finally the early industrialists and farmers whose boats and commerce braved the Falls to gain access to the global economy, this park will celebrate one of our nation’s most diverse, and culturally rich, landscapes,” he concluded.