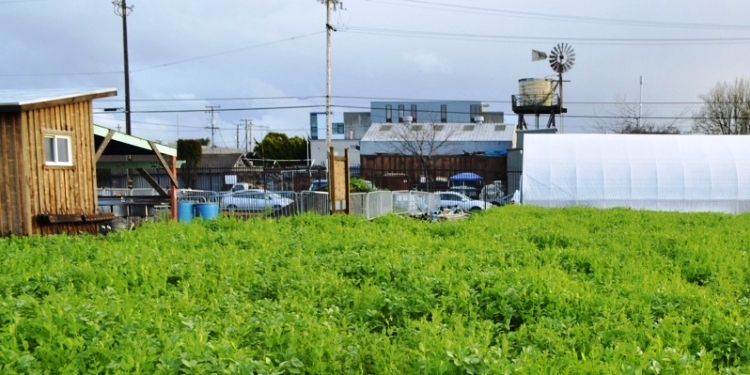 Intelligently-run cities are trying to balance the need to accommodate a growing population with their desire to limit sprawl, while simultaneously working to improve health and quality of life.

Achieving the first part of that equation means repurposing and renewing vacant and underused properties within city limits. Achieving the second part is often done by either turning those vacant properties into parks, or into urban farms.

Coinciding with a rise in farmers markets, cities and states seek to reactivate urban areas by transforming small parcels of land or vacant lots into areas of agricultural production. “Urban agriculture” describes operations ranging from community gardens to commercial production on a larger scale. Technological innovations such as indoor vertical farms and hydroponics have also enabled urban farmers to expand their operations and growing seasons and offer innovative products by making use of abandoned buildings.

Agriculture in urban and suburban areas has risen in popularity in recent years due to an interest in increasing access to healthy foods, promoting sustainable community development and sourcing local produce. States often consider urban agricultural policymaking as part of a larger local food system and may encourage related activities to support agricultural processors, distributors, and marketing. Food hubs are just one example of how multiple aspects of a food system can be housed in one location. In these innovative spaces, producers have direct access to consumers and other resources to support their growing business.

The creation of state-wide food policy councils, task forces, and other bodies promotes the coordination among multiple stakeholder groups on local food system issues. State lawmakers have also encouraged urban agricultural activities through the appropriation of funds and establishment of grants. Fifteen states, plus the District of Columbia, have enacted some form of support or incentives for urban agriculture to date.

One example is California, which, in 2014, implemented Assembly Bill 551 (AB 551). It allows landowners in metropolitan areas to receive tax incentives for putting land in agriculture use.

AB 551 allows a county or city to establish Urban Agriculture Incentive Zones (UAIZ) for the purpose of supporting local food production. It authorizes cities and counties to enter into contracts with landowners who agree to restrict the use of their land for a minimum of five years for small-scale agricultural production. Landowners then have their land assessed at a lower rate based on the average per-acre value of irrigated cropland in California. A city or county with a UAIZ program may establish regulations for implementing and administering the program, including assessing a fee to cover the cost of the program and cancellation fees for exiting a contract early.

The Urban Agriculture Incentive Zones Act just turned four years old, and the California Legislature is now considering extending its statutory life. When it was passed, the bill included a sunset provision that would stop any new property tax reduction under the program in 2019, unless the legislature voted to extend it. This session, the legislature is considering a 10-year extension to allow the existing programs more time to develop and give other jurisdictions more time to start incentive programs.

Since its passage, San Francisco, Sacramento, San Jose and Santa Clara County opted into the program and passed local laws establishing urban agriculture incentive zones. San Diego, Los Angeles, Oceanside and Chula Vista are currently in the process of establishing their own zones or considering doing so.

Now, Long Beach has launched its urban agriculture program, making it the largest city to make use of the Act. From their website: “The Urban Agriculture Incentive Zone Program provides tax incentives to vacant lot owners who enter a contract with the City to use their lot for agricultural purposes for a period of 5 years. While under contract, the lot owner pays property taxes based on the agricultural value of the property, which can offer substantial savings. This opens up new opportunities for local farming and gardening to provide locally grown produce to the Long Beach community.”

Here’s the opening text from the bill that has been introduced to the California legislature to extend the program: “The Urban Agriculture Incentive Zones Act authorizes, under specified conditions, a city, county, or city and county to establish by ordinance an urban agriculture incentive zone for the purpose of entering into voluntary contracts with landowners to enforceably restrict the use of vacant, unimproved, or otherwise blighted lands for small-scale production of agricultural crops and animal husbandry. Existing law prohibits a city, county, or city and county from entering into a new contract or renewing an existing contract under these provisions after January 1, 2019. This bill would extend the authorization for a city, county, or city and county and a landowner to enter into those contracts to January 1, 2029. The act requires a contract entered into pursuant to these provisions to include, among other things, a provision to enforceably restrict property that is at least 0.1 acres and not more than 3 acres in size and a requirement that the entire property subject to the contract be directed toward commercial or noncommercial agricultural use.”

Critics of urban ag often point out—with ample justification—that urban farms can’t hope to match the production volume or efficiency of large rural farms, even with their lower (or zero) transportation costs. But that misses the point, because urban farming has many unique, ancillary social, health, and quality of life benefits. These have been well-documented elsewhere.

Let’s hope the other 35 U.S. states learn from the experience of these pioneers to adopt and improve on state support for urban agriculture.

Featured photo is by Eli Zigas via SPUR.

See review of all states that have passed urban ag legislation on the NCSL website.