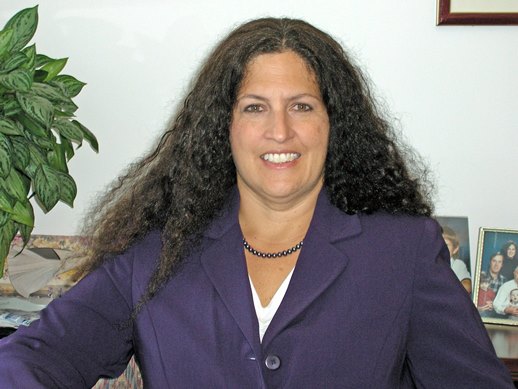 There is not one catalytic event that can be credited for the revitalization of the city of Scranton; rather it is the result of the sum of collaborative efforts from the public, private, and non-profit sectors over the past decade to rebuild, innovate, create and put Scranton on the path to revitalization and sustainability by creating a vibrant community.

In the 1930s and 1940s, Scranton was the place to be. Jobs in coal mining were plentiful and provided a decent living for families. Wealthy mine owners supported the downtown, and their demand for arts and culture provided a direct link to New York City. 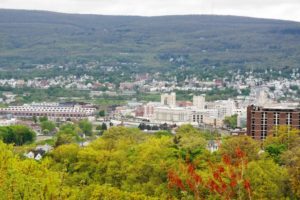 Portions of the city were devoted to mansions for the wealthy and other neighborhoods in the city were segregated by the influx of various ethnicities that came to Scranton looking for work.

During this time, downtown Scranton saw a significant loss of retail stores and offices. There was significant development of retail centers just outside of the city. New home development grew in the suburbs, as did business and industrial parks.

As with many other metro areas around the country, suburbanization and decentralization of economies significantly weakened the urban core. The twofold impact of economic decline and suburbanization left the City of Scranton in need of revitalization. 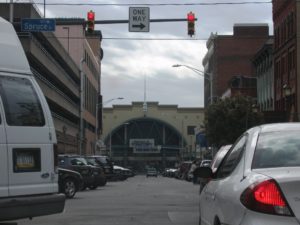 During the 1990s, a redevelopment project spanning three blocks took place, and a downtown mall was built. The Mall at Steamtown had two anchor department stores and a number of small shops, which provided shoppers an experience comparable to suburban shopping malls.

Strategically, it connected the city’s downtown with the Steamtown National Historic Site, which was established in the 1980s as a way to engage community members and visitors with the city’s historic railroad industry. The mall revitalized four downtown blocks of vacant and dilapidated buildings.

However, after two decades, stores in the mall began to close, primarily due to sprawl: continued suburban retail development outside the city limits.  The mall, like so many others across the country, fell into foreclosure and was eventually sold. The new owner is reimagining the facility and innovating the concept of a downtown mall. On May 31, 2016, it was announced that the newly-renovated Mall at Steamtown has been renamed the Marketplace at Steamtown. 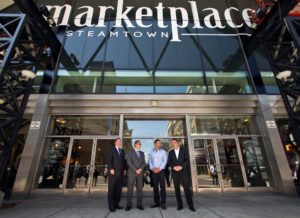 Rather than attempt to compete with suburban shopping centers, the revitalized facility is an experience unique to Downtown Scranton that includes a market place, a satellite campus of Luzerne County Community College, a gym, offices, new niche retail, along with more typical offerings such as dining and a bank.

Other dining, entertainment, and niche retail options are appearing elsewhere in the downtown as well, with formerly vacant storefronts being put to new and innovative uses.

NET Credit Union is another recent downtown success story. The organization purchased a vacant, rundown property at the gateway to the city and created its new headquarters.

A Strong Collaboration: Higher Education and Medicine, “Eds and Meds”

Since the early 2000s, the region’s higher education institutions began collaborating more with each other and with the community. 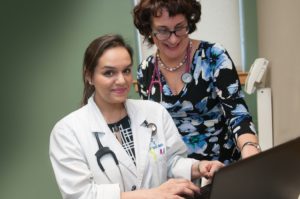 They are educating and placing most of their medical residents locally, but they have also expanded to provide residency services in six states. The Wright Center recently moved its corporate offices in downtown Scranton.

Most recently, the city saw the health care industry restructure and Commonwealth Health System and Geisinger Health System emerge as regional health care giants. This led to significant expansion in employment and facilities.

The medical school’s presence has brought professional faculty and medical researchers to the community. The students are from all over the world, with the majority from the region and Pennsylvania and are engaged in a number of community based initiatives, populating downtown housing and businesses in addition to their studies. The community and economic impact is significant. 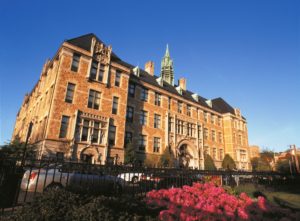 The higher education infrastructure continued to grow and also includes Lackawanna College, Marywood University, and The University of Scranton, along with Johnson College of Technology.

These institutions have campuses in various sections of the city, and several have a presence in the downtown area.

Lackawanna College has a history of purchasing vacant or dilapidated buildings, and renovating them for academic and community use.

The latest is a redevelopment project in downtown will house several allied health, student services, and culinary programs. Their growth program and financial programs bring students from all over the east coast to live and study in Scranton. 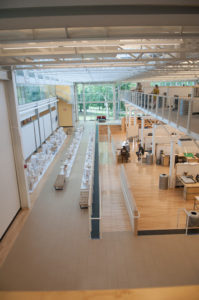 Marywood University’s School of Architecture opened in 2009 with a strong focus on sustainable design.

In 2016, the University of Scranton invested $14 million to revitalize a community recreation area with a number of athletic fields, community basketball court, children’s play area and appropriate seating and parking.

While the athletic fields meet the requirement for competitive university sports (baseball, softball, lacrosse, field hockey and soccer), they are also available to the community. The University also has an employee assistance housing program to revitalize the Hill neighborhood in Scranton, where the campus resides.

The University of Scranton’s new health sciences building and programs are attracting students from all over the country to downtown Scranton. The university owned this building since the late 1970s. It was originally a YWCA, which that they repurposed into functional teaching space.

Together, health care and education – “eds and meds” – have formed a new economic base and source of community reinvestment for the city.

Geisinger Health System is launching is the Springboard program in the city. It is a unique effort to make residents healthier through a variety of programs and services with a number of local community based and national partners.

Housing: Throughout the city, various other initiatives are underway in an effort to reduce blight and spur economic development.

This weathered home was renovated via the Scranton Homebuyer Assistance Program, a joint program of NeighborWorks Northeastern Pennsylvania & the City of Scranton.

The Elm Street Revitalization Project spearheaded by the United Neighborhood Center, a major social service agency in the county, operates a physical, social and economic improvement programs in South Scranton.

They also created the South Scranton Business Association to support small businesses within the zone. Finally, they partner with the University of Scranton to renovate old housing into new homes and commercial space.

Lackawanna County, one of the first public entities in the Commonwealth to mobilize and take advantage of the state’s land banking legislation, quickly developed a land bank program and began operations.

The County has purchased and sold of number of city properties that are in varying stages of redevelopment within the community’s neighborhoods. NeighborWorks NEPA began purchasing the properties, rehabilitating them and then selling them at affordable prices to families looking to purchase their own home.

Arts and Culture: The County also established an arts and culture tax which supports the library system, the Scranton Cultural Center, a major performing arts and event space facility, as well as a variety of arts and culture programs and artist resources in the county. This initiative has led to gallery openings, an art walk and a number of events engaging thousands of residents and tourism each year. 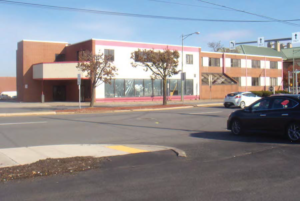 Lackawanna County recently purchased an empty building in downtown Scranton. The former Globe department store was vacant for years and then housed a major business which subsequently moved to the outer edge of the city several years ago.

Vacant again, the County, developed a plan to consolidate all of their operations in this facility. This revitalization will create a major county government center under one roof with hundreds of employees and visitors daily. 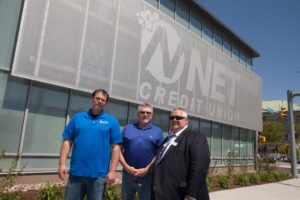 The efforts of Scranton Running Co., created the Scranton Half Marathon which has become a qualifier for the Boston marathon. This has created incredible tourism as well as increased interest in fitness in the City.

The city of Scranton itself has had a difficult financial history and is on track towards recovery, having graduated from the Commonwealth’s Act 47 program. Over the past decade, the city has sought to develop parks and recreation to enhance quality of life and public spaces.

In 2016, the City worked with the Commonwealth of Pennsylvania to secure funding for a redevelopment project in West Scranton. This $5.5 million investment will transport a 15,000 square foot blighted building into market rate housing and offices.

The Greater Scranton Chamber of Commerce has also been a key partner in revitalizing the city of Scranton. The Chamber operates the Business Enterprise Center which is a small business incubator in downtown Scranton. The incubator provides the support services to help start up and emerging small businesses grow and prosper. 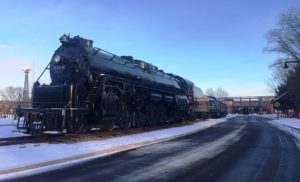 A restored locomotive at Steamtown, which restores rolling stock for rail museums all around the country. Photo by Terri Ooms.

The Chamber is also responsible for several developments in Scranton, including the Mount Pleasant Corporate Center project, which was later purchased by Geisinger Health System.

Over the past several years the Chamber has supported an external consultant, HJA Strategies to provide recovery and revitalization assistance to the city. The addition of this consultant has given the external support it needs in terms of evaluation and planning strategies.

Scranton’s progress has accelerated due to private sector investment. The 500 Renaissance project, a revitalization of the 500 block of Lackawanna Avenue, is yet another major redevelopment effort on a main artery in downtown. The block was transformed into a mixed use project with luxury apartments, retail, and hospitality adjacent to a new urban park. 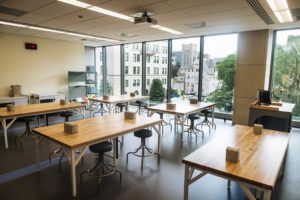 University of Scranton revitalized an old campus building (originally a YMCA) on a main thoroughfare in downtown Scranton.

The city, as part of the federal Strong Cities, Strong Communities program, had the opportunity to work with the National Resource Network (NRN). NRN is a federally-funded organization that works with distressed cities to develop a community strategic economic development implementation plan.

Scranton’s ongoing revitalization is the result of a diverse set of stakeholders making a continued commitment to the city. The collaborative initiatives, financial investment and tenacity have led Scranton on the road to recovery.

The public, private, and non-profit sectors focused on retail, housing, infrastructure, education, health care, social services, and recreation to enhance every aspect of quality of life.

Scranton and northeastern Pennsylvania are successfully rebounding and on the cusp of greatness. Their future is positive and certainly the place to be for businesses and new residents. 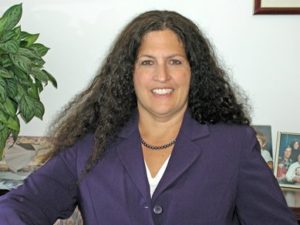 Teri Ooms has been Executive Director of The Institute for Public Policy & Economic Development since 2004. The Institute provides essential research, analysis, and consultation to the private, public, non-profit, and institutional sectors.

Ooms is responsible for research, development, and operation functions. The Institute has conducted research, marketing, feasibility, planning, and economic studies for organizations throughout Pennsylvania, New York and Texas. The Institute also conducts community based research and has produced over 75 studies on economic, community, governance, taxes, housing, healthcare, public safety, transportation and education. Several of The Institute’s research studies have served as a basis for new Pennsylvania legislation.