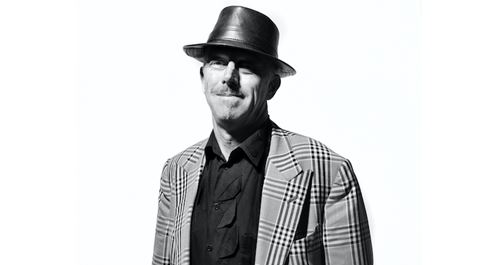 A Guest Article for REVITALIZATION by Tom Bloxham, MBE.

When I first arrived in Manchester, England as a student in the 1980s it was a far cry from the vibrant, buzzing city it is today. And, as much as I loved the place (it’s been my home ever since), I’d often walk around, perplexed at how quickly it became a ghost town each night. There was very little nightlife or culture – least of all a dense urban population.

What there was however was a plethora of beautiful old buildings, but they were dark, dreary and unloved; they cast even more of a shadow on the city each night and something had to be done. 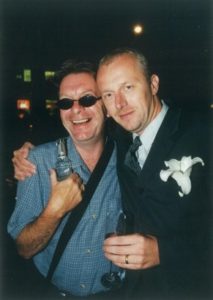 There were pockets of vibrant cultural scenes starting to emerge; my good friend Tony Wilson’s infamous assault on the music scene and the renowned Hacienda nightclub started a cultural appreciation that permeated everyday life.

Or, to quote Peter Saville – who co-owned Factory Records with Tony: “Young people often dream of going to another place to achieve their goals. Tony provided the catalyst and context for Mancunians to do that without having to go anywhere.”

When we first established Urban Splash in 1993, we hoped we could bring the physical architecture to match a new cultural scene. Me and my co-founder, architect Jonathan Falkingham, knew that something could be done; that stunning old buildings in Manchester – and in many northern cities – could be re-used and turned into places in which people could live, work and play.

Ironically we first converted our thoughts into a reality 30 miles west of Manchester, in its great rival city of Liverpool. There, we transformed an area known as the Ropewalks, taking old Victorian mills like Tea Factory and Vanilla Factory and turning them into apartments and workspaces, and building the city’s first new public square in over 100 years at Concert Square.

The Tea Factory Liverpool; as it was and in its current, transformed state.

By the early 1990s, we were back in Manchester making the same happen there. We lead by design, adopting the concept of a Manhattan loft apartment, and using the spacious Victorian buildings as a fabric to create them; leaving brickwork, timber and pillars exposed to retain an authentic feel. We did this at Sally’s Yard in Manchester (one of our first buildings which we spotted whilst walking home very late one night from the aforementioned Hacienda..!).

We then evolved the principle; if it could work for residential lofts, why couldn’t we create some loft-inspired workspaces too? That soon came at Ducie House close to Manchester Piccadilly train station. Another typical Urban Splash building, this disused mill was converted into loft workspaces and attracted loads of brilliant Manchester start-ups, creative businesses and musicians and bands like 808 State and Simply Red. 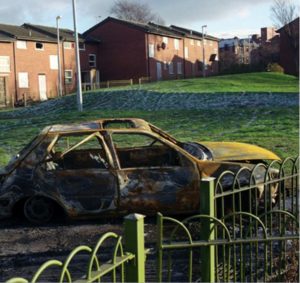 An iconic photograph which epitomises life on the Cardroom Estate in Manchester.

Our momentum in the 1990s was helped not only by the commitment of our very passionate team of designers, marketers, architects and builders – but also thanks to a new political consensus.

With the change in Government in the UK in 1997 came the concept of new urbanism as a widely adopted movement; people began to actually want to live in city centres and to spend their time living in, working in and playing in our cities – especially northern cities where the problem was particularly prevalent (London was an anomaly, people had always dwelled there).

Our Smithfield Building was a high point during this time; the space was transformed to include loft apartments and ground floor shops and bars – great independent hangouts which attracted people to this disused area on the Northern side of town.

Smithfield Buildings in Manchester then and now.

It became an anchor building for the area and I was a part of the team which helped give the district a new, contemporary moniker – the Northern Quarter. It’s now a well-established part of town, with a distinctly Bohemian vibe and loads of independent cafes, bars restaurants, record shops, art shops and buildings to live and work in.

By this time, Manchester’s hugely supportive Council, developers like Urban Splash and various cultural institutions had definitely helped establish urban population in Manchester, that’s why, at the turn of the century, we turned our attentions to the so-called donut areas; districts on the periphery of town which were equally unloved. 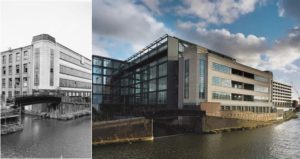 The BoxWorks in its undeveloped state on the left – and as it stands today.

We started out on the western side of Manchester in an area known as Castlefield. We developed a number of old mill buildings there, Britannia Mills, Albert Mill, BoxWorks, creating well-designed lofts in each of them, before then commissioning our new build Timber Wharf scheme which still, 18 years on, houses our head office and apartments above.

Then, we turned our attentions to the eastern side of the city; as part of a new labour initiative back in the year 2000 we were appointed as a developer at Manchester’s Millennium Community site – formerly known as the Cardroom Estate. A truly challenging development which required us to transform a real area of deprivation on the fringe of the city. 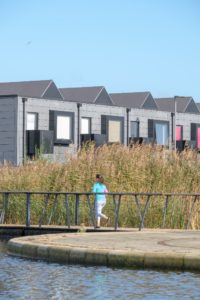 The Canal and Houses at New Islington (former Cardroom Estate).

Years on and we’ve now created hundreds of new homes there, workspaces, a marina and there’s now a health centre, a free school (which we were part of the bid to create) and a dedicated Metrolink stop which helped anchor the area’s new moniker – New Islington. Most recently we redeveloped the former Joseph Stubbs mill, now home to hundreds of workers following a deal with US sports brand Fanatics which, as of 2017, has based itself there.

An appreciation for expanding our attentions outside of cities wasn’t only exclusive to Manchester; one of our business’ biggest success stories is the redevelopment of Royal William Yard in Plymouth.

In 2007, the former Naval supplies base housed a collection of stunning, yet derelict, Grade I and II Listed buildings. It was desolate, even the locals were unsure if they were permitted to walk through the scheme. No one knew what to do with it, and our reputation for transforming problems into places meant we were approached to offer our ideas.

Stubbs Mill at New Islington – then and now.

Fast forward a decade and it’s now a place filled with hundreds of apartments, bars, restaurants, cafes, galleries, a soon-to-be-launched boutique hotel, the University of Plymouth arts faculty and it has its own ferry service to help people reach it easier.

We’ve had our challenges during our time, and any retrospect on changing English cities can’t omit a mention of the global crash of 2008; of course it affected our business but, in spite of choked credit lines and a wariness amongst consumers, the appetite for brilliantly designed urban homes and workspaces remained. 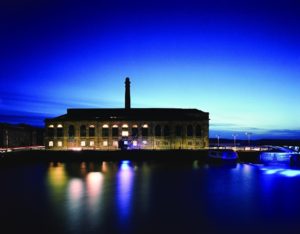 The stunning Brewhouse building overlooking the marina at Royal William Yard in Plymouth.

We changed our business model slightly, asset managing a large portion of our portfolio allowing customers to rent, especially in Manchester where we’d created apartments in 2008-2009 at buildings like Albert Mill.

Now, well beyond the recession and operating in a different world, we’ve seen the appetite of our customers shift again. Many of those buyers who came to us to secure their first loft still want the same levels of design today, but a lack of choice has pushed them out to the suburbs.

That’s why, in 2012, we began investing in the research and development of a modular, urban house prototype. In 2016 it became a reality and our modular, family housing solution – Urban Splash House Limited – was born.

Inside and out at the redeveloped Albert Mill in Manchester.

The layout of these striking modular homes, initially built at the aforementioned New Islington, is determined by the customer; they each choose either a 2 storey, 1000 sq ft model or a 1500 sq ft, three-storey home, with the layout built to their own specification at our factory in the East Midlands. 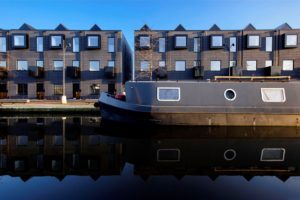 It puts the power, design choice in their hands for the first time – giving customers an architect-designed home without the price tag.

Given the density of urban environments, the space in these homes is in the height, with customers choosing the number of storeys to suit their needs and with high ceilings and pitched roofs.

That first site at New Islington completed, sold out and was fully occupied within a year of launch – it even caught the eyes of successive UK Housing Ministers who hailed the concept. 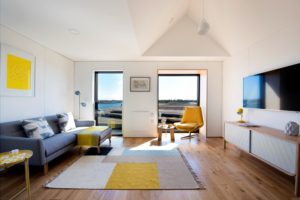 To quote one former minister, Brandon Lewis MP: “I want to see other new entrants follow Urban Splash’s lead and break into the market. That way we can ensure a thriving industry that delivers the high-quality homes that hard-working people rightly deserve.”

We’ve now almost completed a second House site at Irwell Riverside on the western side of Manchester city centre and a third at North Shields near Newcastle. A fourth House site in Birmingham was awarded planning late last year. 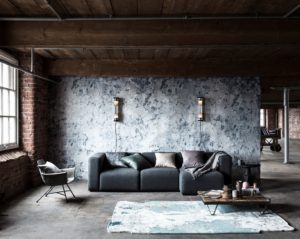 A pop up show lounge at Avro in Manchester.

The concept may differ to what we’re best known for (although rest assured, the transformation of mills is very much a part of our business – our Avro scheme, below, for which phase 2 will launch this month, will give Manchester some of its biggest ever lofts), but the premise remains the same. We are – and have always been about – using great design to create great spaces.

That approach has helped Manchester become a world-renowned city and, as the population here continues to grow, as the city spreads outwards and as more typology such as family homes become an urban norm, we want to use our designs to give the city what it needs.

So, to conclude with my favourite quote – the oath sworn by the citizens of ancient Athens – “We shall leave this city not less but greater, better and more beautiful than it was left to us.”

All photos courtesy of Urban Splash. 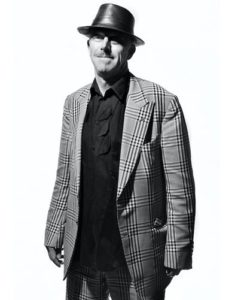 Tom Bloxham, MBE is Chairman and co-founder of Urban Splash, an award-winning regeneration company based in Manchester with operations across England.

2018 marks the 25th anniversary of Urban Splash, a company which has carved out a reputation as an ambitious organisation willing to take on challenging restoration and redevelopment projects – many of which have been shunned by other developers.

The company has won almost 400 accolades – including MBEs for both its founders – for its commitment to projects like Park Hill in Sheffield, Fort Dunlop and Rotunda in Birmingham, Royal William Yard in Plymouth, Castlefield and New Islington in Manchester, Lister Mills in Bradford, Saxton in Leeds, Lakeshore in Bristol and many more.