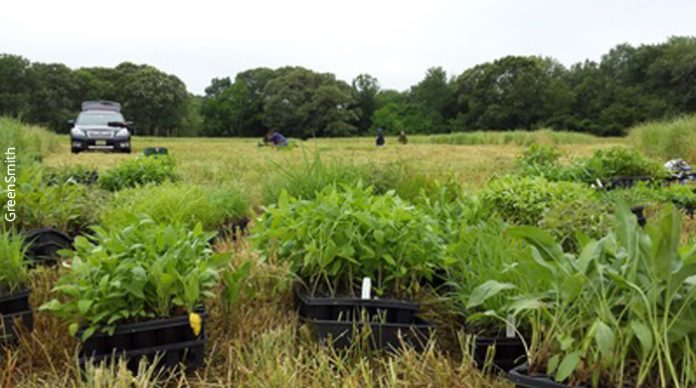 Over many years of farming, fertilizer had been washing into Barrett’s Run Creek, causing degradation and loss of wildlife.

The project was funded by a grant to the American Littoral Society from the National Fish and Wildlife Foundation’s Delaware River Restoration Fund, partnering with the William Penn Foundation and with support from the U.S. Fish & Wildlife Service. The parcel received upgrades that include reforestation buffers, deer fencing and native plantings covering the entire acreage.

Hopewell Township Deputy Mayor Paul Ritter said “this particular area abuts Barrett’s Run and is contiguous with our local school district. A mix of both ag and woodlands, we wanted to improve the stream conservation corridor along the Barrett’s Run waterway—which eventually flows into the Cohansey River. We were so fortunate to acquire the property with the help of many partners—William Penn Foundation, Green Acres, County of Cumberland, the Littoral Society, and the Hopewell Township—so we can preserve this beautiful landscape for future generations. Once it is built up it is gone forever, and we avoided that outcome.”

Shane Godshall, Habitat Restoration Coordinator with The American Littoral Society, oversaw much of the project. He said “This section of farm field is closest to Barrett’s Run, about 30 feet from the farmland to the wetlands so it was a perfect place to start. We began with a first round of planting seed over the grassland acreage in June (2014), and where there were wooded areas we tried to establish added trees. In only about three months, by September, we had a full-on grassland going!”

Ritter explained, “Some of the acreage was planted with vegetation native to the southern New Jersey ecosystem so not only does it look great, it maintains itself going forward. When the grassland area was planted, with help, Shane came with a large tractor, with a planting mechanism behind the tractor and seeded the whole five acres, and it seemed to just pop up quickly.”

A riparian buffer was also installed to protect the stream. “The first planting consisted of over 500 trees down there in October, giving us good coverage,” said Godshall. Buffers can remove up to 90 percent of loose soil and pollutants in stormwater runoff.

Deer fencing was added to protect the small trees until the buffer was fully established. “We also installed walking trails through the buffer so folks can access the area which we ultimately envision will be contiguous with other trails and even the Amish Market, a well-known destination in our area,” said Ritter.

Benches and two gazebos were installed to help create an outdoor “living classroom” adjacent to Hopewell Crest School so students and teachers can walk back to the park and observe foliage, animal life, write poetry or draw and paint, and conduct some lessons outdoors.

Capt. Al Modjeski, Habitat Program Director of the American Littoral Society said, “There are continuing plans to move bit by bit to get Barrett’s Run healthier, including floodplain restoration upstream to address runoff from the Cumberland Insurance property, and re-contouring an area that was damaged from a heavy storm in 2011.”

Stacey Bello, a local girl scout Troop Leader, has worked alongside her small troop on the Barrett’s Run project which she says came on her radar after meeting Godshall through a horseshoe crab tagging event. “We were so excited because it’s (Barrett’s Run) in our back yard. We have done water assessment there to determine the health of the stream, helping the girls learn about different types of things living in the water and supporting data collection.”

Bello’s troop has also assisted with tree plantings and bird boxes, as well as help create the outdoor classroom. “With Girl Scouts, we try to make the world a better place. We do it one spot at a time, making an impact for the next set of hands to work on.”

The improvements have facilitated a proliferation of wildlife returning to the acreage, including bald eagles that have made their home in the park, red tailed hawks, and a wild turkey population. The state-listed Savannah Sparrow and Grasshopper Sparrow have also been sighted.

Much of the rest of the acreage is currently being leased out to farmers, but the long term picture envisions a larger park that may include sports fields, playgrounds and other community areas.

“It is neat to see how the municipality has gotten involved—they are doing all the upkeep including trimming trees and cutting trails, and putting down gravel to keep the access road open,” enthused Godshall. “The restored area is open to the community—everyone is welcome to come enjoy the property.”

Bello concluded, “It’s beautiful back there—there is a lot of wildlife back, especially migratory birds—just to be outside, you have to walk it, take it all in. It is like a little oasis. It’s so peaceful. We’re so proud to have contributed to making it that way,” Bello said.