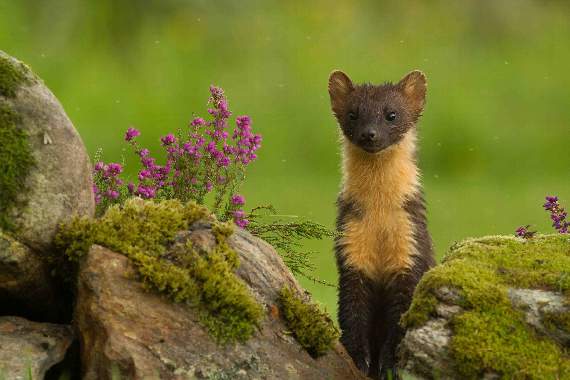 In England, the Gloucestershire Wildlife Trust, the Vincent Wildlife Trust, and the Forestry Commission are collaborating on a pioneering project to explore whether pine martens should be reintroduced to the Forest of Dean and the Wye Valley.

It’s part of the global ecological restoration trend referred to as “rewilding”, which is generally more advanced in Europe than it is here in North America.

In summer 2016, those three organizations, supported by Forest Holidays and the Woodland Trust, started investigating the feasibility of reintroducing pine martens to those areas. The project is drawing on international reintroduction guidelines to help ensure any reintroduction is of the highest possible standard.

Pine martens are one of Britain’s rarest mammals (the second rarest carnivore), and are mostly found in Scotland and central Wales. They are a member of the weasel family, living over large areas at low density (1 per 100 hectares is considered a high-density population). They live in woodlands and their main prey are small mammals, but they have a broad and varied diet, for instance eating large quantities of berries when in season.

Reasons for a reintroduction:

Pine martens were eradicated from much of the UK by Victorian gamekeepers. In Scotland they have recovered well, but in England and Wales the population was thought to be too small to recover. From 2015 to 2017, The Vincent Wildlife Trust successfully moved 51 pine martens from Scotland to central Wales. It is now essential to build on the success of this project to ensure that a population of pine martens in Wales and west England becomes established. We can learn from previous pine marten reintroductions in Europe and North America. These show that to give the wider population the greatest chance of success, the more animals that are released, and at the more locations, the better.

We have assessed the suitability of the habitat in the Forest of Dean and lower Wye Valley for pine martens and studied whether a stable population of pine martens could live in this area. Our research shows that the region could support nearly 200 pine martens. If a reintroduction goes ahead, 40 animals should be released. Due to geographical barriers, these pine martens would predominantly expand to the west and north, towards where pine martens are already established in Wales.

Pine martens may be at risk of being killed by foxes and road traffic. However, road density in the Forest of Dean and lower Wye Valley is comparable with areas of the Netherlands which have healthy pine marten populations.

The feasibility study has also identified several benefits to people and to wildlife in the UK if pine martens are reintroduced to the Forest of Dean and lower Wye Valley:

Pine martens are known as “generalist predators” meaning they eat what is most common and available. They can have several positive effects. For instance, pine martens have been shown to control non-native grey squirrels, which are known to cause a range of problems: in central Ireland, the natural growth of the pine marten population has led to grey squirrels being eradicated from six counties. If grey squirrels are controlled, and the populations of other common animals are capped, rarer species can thrive. In this way pine martens provide an important balancing effect. We also assessed any risks pine martens may pose to rare and protected wildlife. The only high risk we identified was the potential disturbance of bat roosts within buildings by pine martens looking for den sites. The Vincent Wildlife Trust have experience of preventing this from happening, and we would introduce such measures if the reintroduction goes ahead.

Pine martens are a joy to watch, and would engage people with nature. They may also bring more tourists to the region. Also, because the numbers of grey squirrels could be reduced, people who plant trees will benefit. However, pine martens may hunt pheasants and chickens that are kept within woodlands. We don’t know the extent of this problem, but preventing pine martens from pheasants and chickens will involve very similar techniques to preventing foxes eating poultry. We are working closely with gamekeepers to gather their opinions about the project, and potential prevention options if the reintroduction does go ahead.

Community support is essential for the reintroduction to proceed. There have already been detailed discussions with representatives from a variety of groups. There was broad support for the principal of reintroducing a native species. Many suggested that their concerns could be addressed if the impact of pine martens is monitored in detail. We thoroughly support this approach, and any reintroduction project would also have 5 years of detailed monitoring alongside it. The main community consultation will be completed in winter 2017/18. This will include public meetings and displays, as well as online and on-street public opinion surveys.

This project could have a range of positive impacts for pine martens, biodiversity, and people. Conservationists often lament the decline in UK wildlife, and this restoration project could be a key step in reversing that decline. A decision will be made about whether to reintroduce pine martens in 2018.