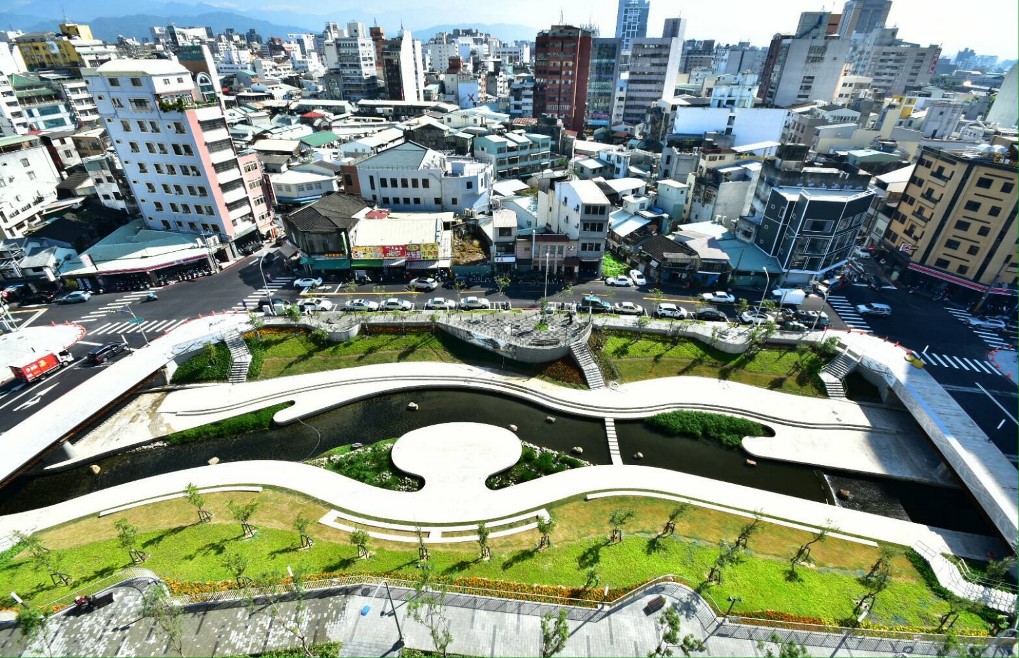 In central-western Taiwan, Taichung (officially known as Taichung City) has a population of about 2.79 million, making it the nation’s second-largest city.

The name of the city was created while under Japanese rule, and the city went on to became a major economic and cultural hub. The Japanese referred to it as “the Kyoto of Formosa“, due to its calm and beauty. It now serves as the core of the Taichung–Changhua metropolitan area, and its Xitun District is the primary industrial and manufacturing area. 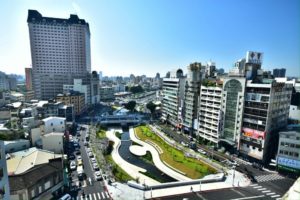 Like so many urban rivers around the world, the the 6.1 kilometer stretch of the Green River that runs through the Central District of Taichung has long been an ugly, lifeless, horribly-polluted canal. The nearby Willow River (Liuchuan River) suffered the same fate. Both have now been cleaned and beautified into thriving public spaces.

Of course, no one is going to mistake these projects for ecological restoration: they are still over-engineered concrete canals, not living rivers. But at least now they are cleaner, prettier and more accessible concrete canals.

Mayor Lin Chia-lung has actively promoted rejuvenation of the city’s water resources after taking office in December of 2014. 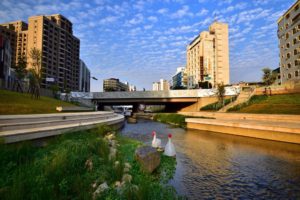 The city is fortunate that these rivers run through the downtown, but hasn’t traditionally treated them with much reverance. In past decades, domestic sewage was discharged directly to these rivers, leading to horrific odors. As a result, the city swept the problem “under the carpet” by covering them with cement.

Now, through new treatment facilities, the quality and flood control of these rivers and the surroundings has now been greatly improved, and portions can once more see daylight.

Mayor Lin explained that, in addition to the 600-meter treatment in the first phase, treatment of the whole basin will be planned based on the special budget for future infrastructure. By then, Green River and Willow River will form the two-river culture of Taichung City. Between the two rivers will be walkways set up with the overpass railway and park roads, forming a people-oriented green corridor.

Green River is expected to be made open to the public by Lunar Chinese Year. Mayor Lin invites citizens in Taichung to visit the two rivers and witness the glory of Central District and stories behind it.

Chou Ting-chang, Director of the Water Resources Bureau, pointed out that the process of detailed planning was not easy in addition to traffic control, pipeline migration, and communication with nearby stores. The Green River Waterfront Corridor Project improves the quality of Green River radically via improved drainage, sewage interception, gravel treatment, and flood control. This makes much of the Green River an ultra-large underground water filter.

The Water Resources Bureau indicated that the priority of the Green River Waterfront Corridor Project was quality improvement, which accounted for 2/3 of the total expenditure. The polluted source of Green River was treated on-site and then reflowed. The daily volume of treatment is 24,000 CMD. In addition to solving pollution, the Project maintains the necessary base flow of the river. After treatment, Green River’s status has been changed from seriously polluted to mildly polluted. 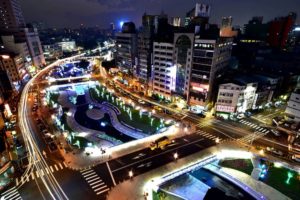 The safety of flood control and the conservation of the ancient bridge are priorities in the Project. Drain box culverts were set up to double Zhongshan Green Bridge’s cross-section allowing the floods to pass, while protecting the ancient bridge from flooding; during the construction, piers of Yin Bridge were found occasionally and protected by the Bureau. The façade of Yin Bridge is embossed on the outside of the existing bridge. In the future, citizens may appreciate the historical trace of Yin Bridge closely through the sidewalk under Taiwan Boulevard Bridge.

The construction of water treatment facilities and landscaping enhancements will end soon, at which time (relatively) clean water will will once again flow through the Green River. The next step is the treatment of the section on Minquan Road, which is part of the Water Environment Project within the city’s Forward-looking Infrastructure Development Program.

Of course, there’s always room for improvement. Local resident Grace Lin, who has witnessed the canals’ transformations, said that the renovation of the Willow River lacks sufficient water-friendly public spaces, has an insufficient diversity of facilities, and not enough integration with nearby tourism resources.

Nonetheless, Taichung Water Resources Bureau Director Chou Ting-chang enthuses “The management of the waterways determines a city’s destiny. We want to restore the reputation of ‘Little Kyoto’ for the old downtown.”