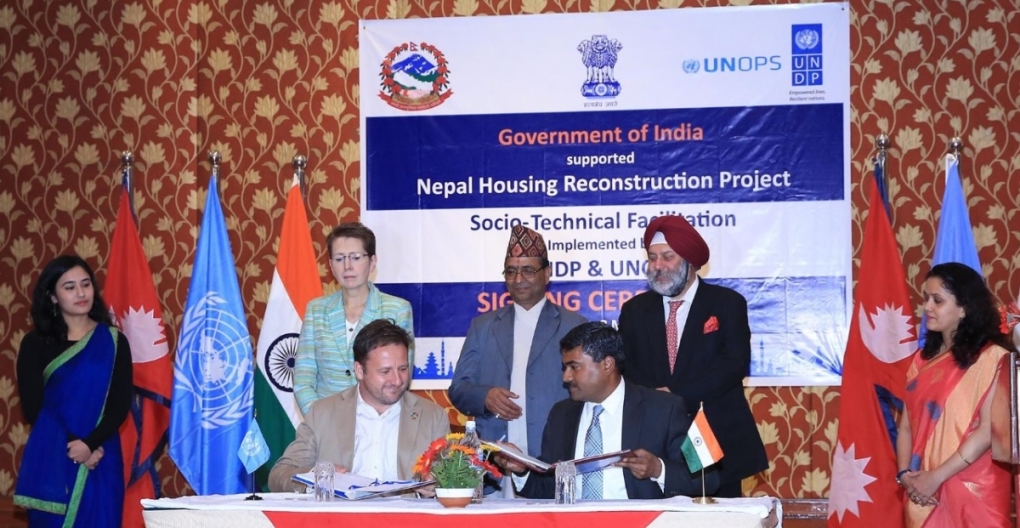 As REVITALIZATION has reported several times over the years, the efforts to reconstruct and revitalize Nepal after the devastating 2015 earthquake were long-delayed in getting started, and have been sporadic ever since.

Now, in the latest bit of good news, the Government of India, the United Nations Development Programme (UNDP) and the United Nations Office for Project Services (UNOPS) signed, on March 8, 2018, a partnership agreement to expedite the post-earthquake reconstruction process in Nepal.

“We look forward to making this partnership a success to ensure that the poor, vulnerable and marginalized households who need our support the most are able to reconstruct resilient houses speedily while leaving no one behind,” said Renaud Meyer, Country Director, UNDP Nepal.

Under the agreement, the Government of India will provide a $16.2 million (USD) grant to the two UN agencies ($8.79 million to UNDP and $7.41 million to UNOPS) to support safer reconstruction of 50,000 houses in Gorkha and Nuwakot, two of the districts hit hardest by the 2015 earthquake.

The grant assistance from the Government of India will allow UNDP and UNOPS to provide socio-technical facilitation to help quake-affected families rebuild their houses. While UNDP will provide this facilitation to 26,912 houses in Gorkha, UNOPS will cover 23,088 houses in Nuwakot. The three-year project will help house-owners ensure that their new structures comply with government norms and are earthquake resilient.

With the Government of Nepal having adopted an owner-driven reconstruction approach, support to house-owners in ensuring access to finance, materials, knowledge, technologies, skills and land—‘socio-technical facilitation’, in other words—becomes critical to promote safer reconstruction. Experiences from the reconstruction of quake-affected areas underway since 2015 show that a significant number of households, who are entitled to receive the housing grant provided by the Government, require hands-on socio-technical assistance to build safer and code-compliant structures. The project is expected to address this need at the household level through deployment of trained engineers, architects, masons and community facilitators.

Speaking at the signing ceremony, UN Resident Coordinator Valerie Julliand thanked the people and the Government of India for extending the support, and entrusting the UN system with delivering the services. “We have learned from the experiences around the world that disasters like this tend to disproportionally affect socially and economically vulnerable people. These projects will address the special needs of those populations and make them more resilient to disasters in the future,” she said.

Ambassador of India to Nepal H.E. Mr. Manjeev Singh Puri said, “The partnership agreement with UNDP and UNOPS will enhance the availability of technical knowhow and expertise to house owners in Gorkha and Nuwakot districts to reconstruct their homes with earthquake-resilient features.”

The project will be implemented in close coordination with the Embassy of India, Kathmandu, the National Reconstruction Authority, the Central Level Project Implementation Units of the Ministry of Federal Affairs and General Administration, the Ministry of Urban Development, and concerned local government offices, municipalities and rural municipalities in the two districts.

“With the generous assistance of the Government of India and in close partnership with the Government of Nepal, we will all be working together to support those families in greatest need, safely rebuild their homes and their lives. This is critical to sustainable development and we are proud to be a part of this effort,” said Sanjay Mathur, UNOPS Asia – Regional Director.

In the aftermath of the 2015 Gorkha Earthquake, GoI had provided a grant of US$ 250 million and a US$ 750 million Line of Credit for post-earthquake reconstruction of houses, schools, hospitals, heritage structures and other affected infrastructure.