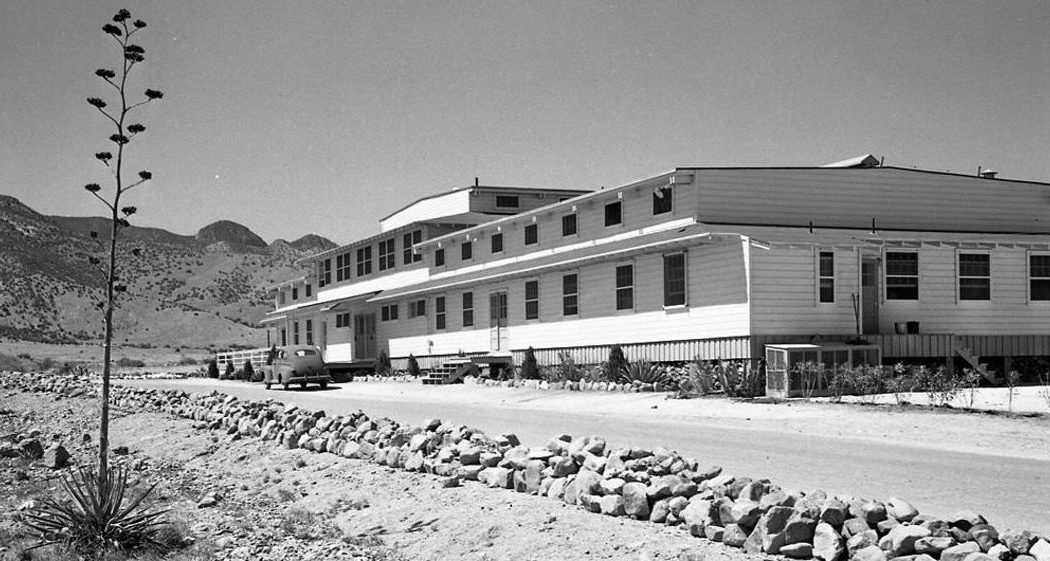 Fort Huachuca is a U.S. Army base in Cochise County, Arizona. It was established March 3, 1877 as Camp Huachuca. The garrison is now under the command of the United States Army Installation Management Command. It’s about 15 miles (24 km) north of the border with Mexico, and is at the northern end of the Huachuca Mountains.

From 1913 to 1933 the fort was the base for the “Buffalo Soldiers” of the 10th Cavalry Regiment. During the buildup of World War II, the fort had quarters for over 25,000 male soldiers and hundreds of WACs.

As of the 2010 census, Fort Huachuca had a population of about 6500 active duty soldiers, 7400 military family members and 5000 civilian employees. With over 18,000 people on post most weekdays, it’s one of the busiest U.S. Army installations.

On March 15, 2018, it was announced that Arizona State Parks and Trails had received $500,000 in grant funding from the U.S. National Park Service to restore the historic World War II-era black officers’ club called the Mountain View Officers’ Club at Fort Huachuca. The club has been vacant since 1998.

Earlier, on November 8, 2017, the National Trust for Historic Preservation had announced a major milestone in their long-standing effort to save the 75-year-old Mountain View Officers’ Club (MVOC) at Fort Huachuca. The U.S. Army had conditionally accepted a proposal to rehabilitate and reuse the building as a multipurpose facility that honors the history of the site and fulfills pressing needs for the community.

The statement of support from the commander of Fort Huachuca moves the project forward, and allows a public-private coalition led by the National Trust and others to explore new partnerships, leasing options and funding opportunities, including competitive government grants.

“Fort Huachuca welcomes the opportunity for enterprise with and supports the National Trust’s vision for the Mountain View Officers’ Club,” said Col. James W. Wright, commander, U.S. Army Garrison Fort Huachuca. “We are strongly encouraged by the proposal and look forward to a great partnership with the National Trust as we work toward a bright future for this historic building.”

As one of the last-remaining structures of its kind anywhere in the United States, the MVOC is central to understanding the complex history of the African-American military experience and large-scale war mobilization efforts inside the country. During World War II, Fort Huachuca was the largest training facility for African-American soldiers, housing an estimated 25,000 troops at its peak, with more than 1,400 temporary buildings constructed for the cause. The MVOC building, which has been vacant since 1998, is one of only a few buildings that survive from this period.

“We are delighted to have the interest and support of Fort Huachuca in exploring the untapped potential of the Mountain View Officers’ Club,” said Christina Morris, field director for the National Trust for Historic Preservation. “Reactivating the Mountain View Officers’ Club is a creative solution that answers the local need for a new social, event and recreational center, while keeping alive this chapter of Civil Rights history for future generations of soldiers and civilians.”

The coalition’s proposal to restore the MVOC positions the building as an attractive destination for meetings, dining and outdoor activities, whose energy promotes closer connections between Fort Huachuca, the City of Sierra Vista and surrounding Cochise County. The reuse plan transforms the building and grounds into a first-class multipurpose facility within a distinctive historic setting that provides an array of options for the local population, including: a place for military and civilians to relax at the end of day; a comfortable local spot for families and friends to have dinner on a regular basis; an upscale area for daily business meetings or lunches; and a flexible venue for cultural events and performances.

“Fort Huachuca is committed to continued involvement in planning and carrying out the adaptive reuse of this historic building,” said Marty Tagg, cultural resources manager of U.S. Army Garrison Fort Huachuca. He indicated that the proposed project has potential to directly benefit the Army mission in a way that is cost-effective, community focused and meets the U.S. Department of Defense’s compliance requirements. “The project is clearly a win-win situation for everyone involved.”

As part of the MVOC’s ongoing National Treasures campaign, the rehabilitation and reuse proposal was prepared and submitted to Fort Huachuca for approval in summer 2017 by a project team comprising professionals from: the National Trust for Historic Preservation; the Southwest Association of Buffalo Soldiers; the Arizona Community Foundation; the Arizona Preservation Foundation; the Tucson Historic Preservation Foundation; Raytheon; the Arts Foundation for Tucson and Southern Arizona; Kadence Restaurant Group; Poster Frost Mirto; and the U.S. Army Garrison Fort Huachuca.

While the reuse proposal identifies opportunities for interested commercial investors across the region, the National Trust and partners are also looking beyond the private sector for funding sources. Most recently, in coordination with the National Trust, Fort Huachuca and local partners, Arizona State Parks and Trails applied for a $500,000 capital grant from the National Park Service’s African-American Civil Rights Fund, a program to document, interpret and preserve sites and stories tied to the African-American struggle to gain equal rights as citizens in the 20th century.

The MVOC stands out as the first such site in Arizona to be submitted for consideration for a grant from the Civil Rights Fund. If awarded, the grant would allow for the full restoration of the building’s exterior to its 1942 appearance, as well as key elements of the Dance Hall inside.

Renewed interest in the Mountain View Officers’ Club is the result of local preservation efforts, an intensive federal consultation process (Section 106 of the National Historic Preservation Act) and the creation of a broad-based coalition backing a single, innovative reuse plan. Vacant since 1998, Fort Huachuca had determined that they no longer had a use for the property, and previously considered demolition as one of several options for the building’s disposition.

Early actions by Arizona preservation partners and the Southwest Association of Buffalo Soldiers resulted in the exploration of new, compatible non-Army uses for the building. The Mountain View Officers’ Club building was listed as one of America’s 11 Most Endangered Historic Places in 2013 and designated a National Treasure by the National Trust in 2014.