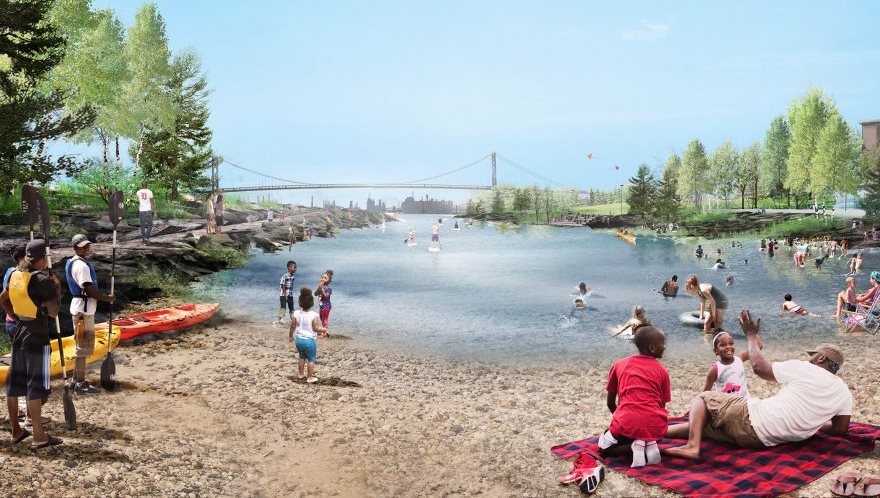 On April 10, 2018, during the announcement of the team that will design Detroit’s revitalized West Riverfront Park, Mayor Mike Duggan said “This is such an amazing day to me. As a kid … in my generation in Detroit, there wasn’t a riverfront. You kind of knew the river was out there, but the average Detroiter couldn’t get near it. To us, the riverfront was a place where the Uniroyal plant and cement silos were.”

At that event, the Detroit RiverFront Conservancy revealed that New York City-based landscape architect firm Michael Van Valkenburgh Associates (MVVA) had been selected as the winning firm of its international design competition to transform the 22-acre West Riverfront Park in downtown Detroit into one of the most dynamic public spaces in the world. 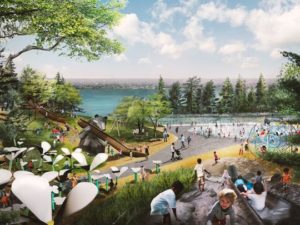 “This design competition has captured the interest and the imaginations of not only Detroiters, but of people throughout the world,” said Matt Cullen, chairman of the Conservancy’s Board of Directors. “The creation of West Riverfront Park would be one of the most significant public space projects undertaken in our city’s history. It has the potential to become a world-class gathering place and drive economic growth in Southwest Detroit for generations.”

Since the Conservancy opened West Riverfront Park in 2014, it has become a popular destination for Detroiters and tourists alike who enjoy the park’s wide-open spaces and sweeping views of the Detroit and Windsor skylines. At 22 acres, it is comparable in size to Brooklyn Bridge Park in New York City, Maggie Daley Park in Chicago and Riverside Park in Buffalo.

“It was love at first sight when I saw the Detroit River,” said Michael Van Valkenburgh, president & CEO of Michael Van Valkenburgh Associates. “I immediately recognized that this new park could draw the city to the water’s edge. My team and I spent a lot of time exploring Detroit and meeting many Detroiters in the process. We’re looking forward to making West Riverfront Park an amazing place.”

Brooklyn Bridge Park and Maggie Daley Park are among the firm’s most notable projects. MVVA is known worldwide for its creative and unique urban design with projects that include parks, plazas, cultural institutions, colleges and universities and gardens. Clients include Princeton University, Harvard University, Wellesley College, The Menil Collection and Waterfront Toronto.

The MVVA team was made even stronger by the addition of Sir David Adjaye, principal of Adjaye Associates, who was described in Time Magazine as “one of the great architectural visionaries of our time.” 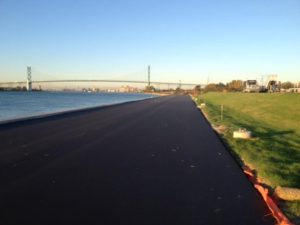 In 2017, Adjaye was the only architect to be named to the Time Magazine list of 100 Most Influential People. The same year, he won the London Design Medal and received a knighthood from the Queen of England. He also completed the Smithsonian National Museum of African American History and Culture in Washington, DC.

The firm’s projects have received many significant professional honors for design excellence and for innovation. MVVA’s work with Brooklyn Bridge Park was awarded the Brendan Gill Prize from the Municipal Art Society of New York in 2010, which is given to a work of art that best captures the energy and spirit of New York City. Additionally, the firm was selected as the Firm of the Year by the American Society of Landscape Architects in 2016.  Last year, the firm received the Global Award for Excellence from the Urban Land Institute for its work on the Corktown Common Project in Toronto.

“This park will have a profound impact on the lives of Detroiters and will be a regional draw for recreation,” said Mark Wallace, president & CEO, the Detroit RiverFront Conservancy. “The work that has brought us to this moment has been one of the most inclusive and transparent processes that has been undertaken in public space design anywhere.”

From its launch in 2017, the West Riverfront Park Design Competition has incorporated a unique community-led design process in which the public has been encouraged to share their ideas and input. To date, the Conservancy has held more 20 public meetings on the future of West Riverfront Park.

Additionally, the Conservancy created a Community Advisory Team (CAT) of Detroiters who visited New York, Chicago and Philadelphia to bring back ideas for the future of West Riverfront Park. 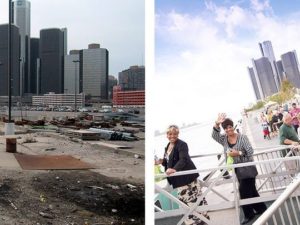 The vision for Detroit’s west riverfront park unveiled a few days ago was not an isolated event but part of the long-running success story of waterfront revitalization.

That story goes back at least 30 years to when then-Mayor Coleman A. Young created what he called the linked riverfront parks: the Chene Park music center, a small marina at St. Aubin and Atwater, and more.

The vision for the riverfront evolved after the mid-’90s when General Motors purchased the Renaissance Center and began to mull how to transform the concrete no-man’s-land between the RenCen and the water.

Back in the present, the Ralph C. Wilson, Jr. Foundation provided a $345,000 grant to make the West Riverfront Park Design Competition possible, further underscoring the power of public-private partnership in rebuilding Detroit. The grant comes from the foundation’s “Livable Communities” focus area that seeks to create strong and sustainable communities by supporting parks, trails and green design.

“We’re proud to support the design competition and welcome MVVA to this pivotal project for Detroit,” said David Egner, president & CEO of the Ralph C. Wilson, Jr. Foundation. “Transforming West Riverfront Park into a world-class gathering space allows our community to take a significant step toward revitalizing the entire West Riverfront. This project has the potential to make a significant positive impact that will resonate throughout our region for many decades.”

The public first viewed the work of the four firms during formal presentations on February 8 at 1001 Woodward in downtown Detroit. The presentations were then followed by a two week public exhibition at which the models and renderings were on display. 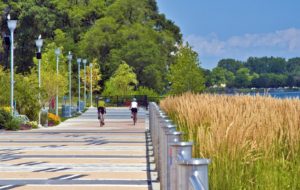 The winning firm was selected based on the decision of the jury that the Conservancy assembled for the competition, as well as from feedback during the public exhibition of the models and renderings.

“As Detroit’s revitalization continues, one of our guiding principles has been that the riverfront is for everyone, and this design delivers on that promise,” said Mayor Duggan. “We all remember just over a decade ago when our riverfront was lined with parking lots and cement silos. The fact that four of the best design firms in the world participated in this competition shows just how far our International riverfront has come under the leadership of the Conservancy.”

In addition to MVVA, the other firms in the final round of competition included: Gustafson Guthrie Nichol (GGN), Hood Design Studio (HDS) and James Corner Field Operations. 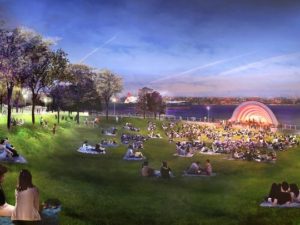 Next steps in bringing a transformed West Riverfront Park to fruition include the Conservancy working with MVVA to further engage the public in honing in on the final design elements of the project. Throughout this process, the Conservancy will continue to raise the funds for the estimated $50 million project.

The Conservancy’s ultimate vision is to develop five-and-a-half miles of riverfront from the Ambassador Bridge on the west to Gabriel Richard Park, which is just east of the MacArthur (Belle Isle) Bridge.

The first phase of the project, three-and-a-half miles along the east riverfront, is more than 80 percent complete and spans from Joe Louis Arena to Gabriel Richard Park. Opening up a segment of the west riverfront for long-awaited public access is now a reality with the transformation of a former newspaper printing facility property at 1801 W. Jefferson into a 20-acre green oasis. The Conservancy purchased the property from the Detroit Free Press in 2007.

Visitors will find three new pathways linking the riverfront to West Jefferson Avenue, benches, trash receptacles and plenty of lush green space for a variety of outdoor activities. The Conservancy has expanded the width of the popular RiverWalk along this parcel to 30 feet to better accommodate adequate space for walking, running, biking and fishing. Safety and security improvements include new railings, lighting, security cameras and call boxes.

In addition to the support received from the Ralph C. Wilson, Jr. Foundation for the design competition, riverfront planning is being made possible by the Michigan Department of Transportation, the Fred A. and Barbara M. Erb Family Foundation, Fifth Third Bank, FORD/UAW, the City of Detroit, Hudson Webber Foundation, the Knight Foundation, the Kresge Foundation and the Detroit Metro Convention & Visitors Bureau.

Unless otherwise credited, all photos courtesy of Detroit RiverFront Conservancy and all renderings courtesy of Michael Van Valkenburgh Associates.

See article by John Gallagher in the Detroit Free Press.