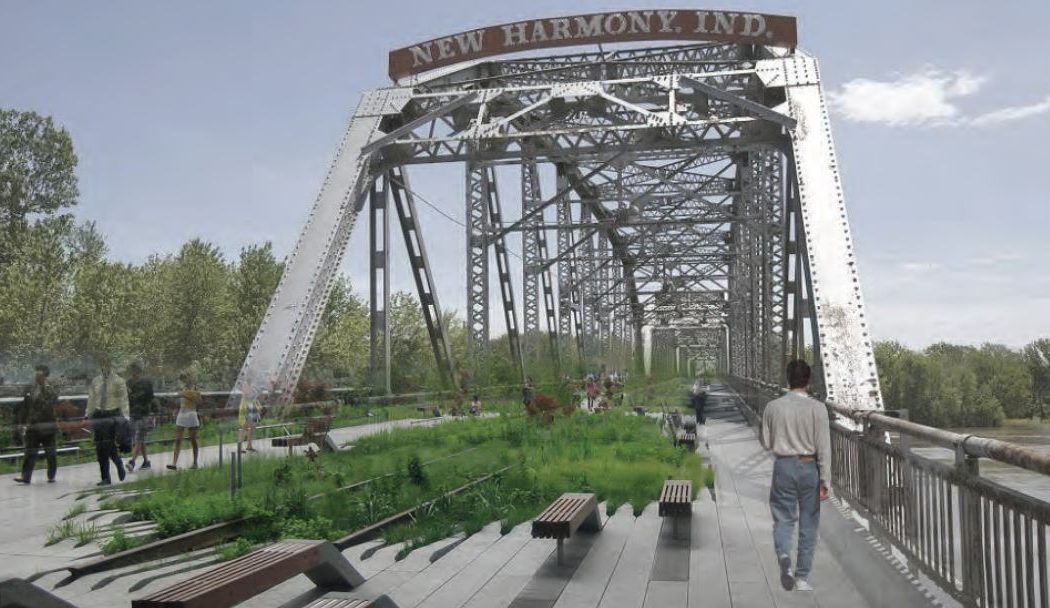 The village of New Harmony, Indiana may be small—with just under 1000 residents—but it has never been short on vision. The small town was home to two different utopian societies in the 1800’s, as mentioned in Rewealth, REVITALIZATION publisher Storm Cunningham‘s 2008 book from McGraw-Hill.

Today, it has public art, parks, museums, theaters, performing arts, galleries, and many more amenities that give this tiny hamlet the cultural life of a big city.

So, when a historic bridge was closed, the community wasn’t content to simply have it be demolished, or to let it rot in place. They envisioned restoring and repurposing it as a quality of life-enhancing pedestrian bridge park.

In 1930, the Harmony Way Bridge in New Harmony, Indiana, was built as a private toll bridge. The federal government bought the bridge in 1941, and it served the local communities faithfully until 2012, when it was determined to be unsafe for vehicular traffic.

Then, in 2015, Indiana’s Regional Cities Initiative was launched by Indiana to fund “quality of place” projects that would attract and retain talent to live in the state. Lora Arneberg, a community volunteer, headed the effort to include the bridge as one of these projects. The project was approved for funding to the tune of $350,000 in matching funds from the state and the project began to gain steam.

Since then, Lora has been working with donors, IN Landmarks, the Regional Cities support team, VS Engineering, the Louisville Big 4 bridge management team, TSW Design, Ice Miller Legal Counsel, and elected representatives to formulate a feasible path forward. In 2018 a committee of other local volunteers was formed to help execute and refine the plan. 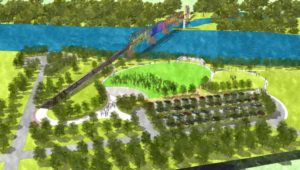 Rendering of bridge and adjacentareas by TSW Design Group.

The 1930’s steel truss bridge had been an important, interstate corridor for over 80 years when it closed in 2012 because of lack of funds for needed basic repairs, but it had always struggled financially because it was “privately” owned and operated by a federally created commission and didn’t have the financial management advantages of typical, government owned structures. So, aside from the physical repairs, the biggest challenge of this project would be finding a way to solve the long-term ownership challenge.

Private donors funded engineering studies and design work, and Indiana landmarks provided administrative support while the ownership and legal strategy were tackled in the background. Arneberg contacted other pedestrian bridges to find out about their funding, legal ownership structure, and operational strategies. The management team of the Louisville Big Four bridge visited New Harmony and lent their years of experiences to help plan a strategy for the new project.

After two years of planning, a path forward finally arose, and a legal team was hired with more private donor support from the Efroymson Family Foundation of Indianapolis, to craft state legislation to create an independent government entity to own and manage the bridge. The “Bridge Authority”, would bring the bridge into local hands for management while giving it the financial advantages of typical government ownership, and shielding the surrounding government entities from unwanted liability.

A group of community volunteers from Indiana and Illinois were gathered to promote and carry-out the project strategy, and in March of 2018, the legislation passed the Indiana state House unanimously to finally give this bridge the legal home it needed to be sustainable.

Rendering of the pedestrianized bridge by TSW Design Group.

This project still has many big steps to take before a ribbon cutting, but the bridge finally has a very real chance at a future. This is thanks in large part to state leaders who support quality of place projects in a real and visionary way. But it couldn’t happen without the support of private donors, and the hard work of the many local volunteers and advocates who championed the vision and recruited that support.

This project is being done as an all-volunteer and 100% donor supported project, which speaks to the power of ideas and grassroots, community-led revitalization.

Shortly after the passage of the Indiana legislation, the bridge committee announced a $50,000 pledge from the Kent and Laurie Parker Family Foundation to the project, that will be dedicated to a restricted reserve within the Parker’s family foundation with the express purpose of helping offset the realized expenses of restoration and physical improvements to the bridge.

In announcing the gift, Kent Parker, President of the Kent and Laurier Parker Family Foundation said, “We are passionate about supporting initiatives in New Harmony that promotes the long-term sustainability of our community. We feel the long-term stabilization and preservation of the Harmony Way Bridge is an important objective. We are grateful for the efforts of Indiana Landmarks and the Harmony Way Bridge Project committee, as well as the numerous parties, now and in the past, that have endeavored to preserve this important landmark.”

This bridge re-imagined as a pedestrian space would be a unique, regional destination for existing and new visitors to complement the already thriving tourism economy in New Harmony. Sited adjacent to the Visitors’ Center at the Atheneum, it is a natural addition to the fabric of the visitor experience.