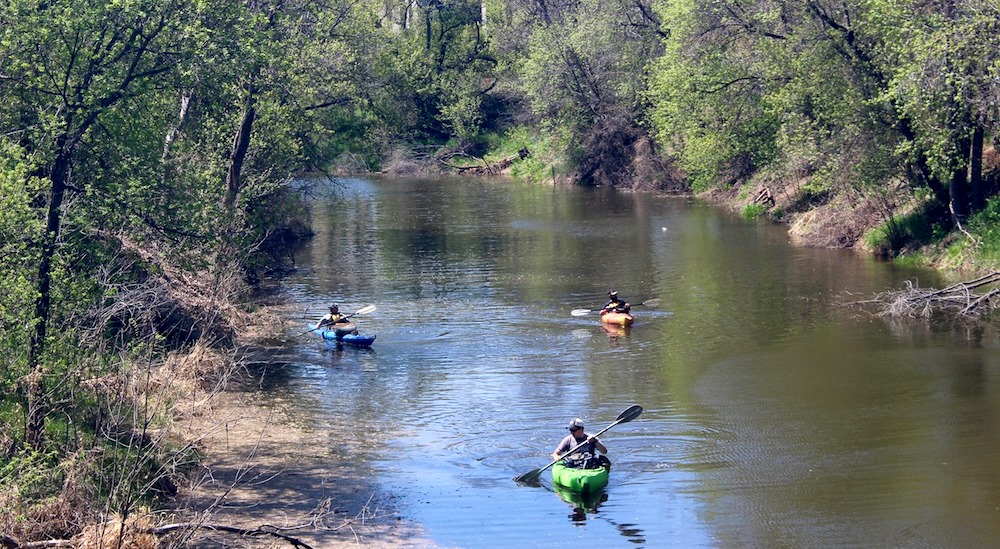 Minot is the county seat of Ward County in north-central North Dakota. It’s best known for Minot Air Force Base, which is about 15 miles (24 km) north of the city. With a population of 40,888 at the 2010 census, Minot is the fourth largest city in the state, and a trading center for a large portion of northern North Dakota, southwestern Manitoba, and southeastern Saskatchewan.

Founded in 1886 during the construction of the Great Northern Railway, Minot is also known as “Magic City“, commemorating its remarkably rapid initial growth.

Minot in 2009.Photo by Bobak Ha’Eri via Wikipedia.

When Minot first started rising along the banks of the Souris River in the 1880s, the settlers probably weren’t thinking too much about flooding. Among North American rivers, the Souris isn’t particularly big and doesn’t seem all that threatening. But don’t underestimate the power of its waters.

The city was inundated with flood waters on June 22, 2011 as a result of—according to the U.S. Army Corps of Engineers, which had built their “protection”—high soil content, above average snow pack, and persistent moderate spring rainfall and larger summer rainfall combined to produce multiple flood peaks and record flooding throughout the Souris River Basin.

Concern about flooding started in January 2011 when it was announced that the Saskatchewan Watershed Authority had to do first ever winter releases form the Rafferty Reservoir. Rivers and creeks which were normally dry in the fall were flowing well above. By early April 2011 the Mouse River in the Minot started to rise and continued to rise throughout May. On May 23, 2011, emergency levee operations began and on May 31, 2011, the City ordered the first of two mandatory evacuations of residents in the valley. The river crested approximately one foot below expectations and residents were allowed to return. 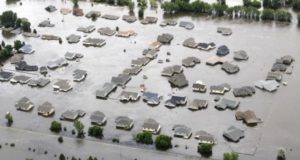 Minot in 2011.Photo courtesy of US Army Corps of Engineers.

Unfortunately, things did not improve and work began on a secondary dike system to protect vital infrastructure in Minot as the Saskatchewan Watershed Authority announced “reservoirs have no capacity to store further inflows.”

With additional releases water began to overtop levees in the Souris River Basin and in Minot. On June 22, 2011, a mandatory evacuation order was called in Minot and 11,000 residents were displaced from their homes within the valley.

The river crested on June 26, 2011, at 1,561.72 feet above sea level which is the highest recorded in Minot’s history. Damage to the city’s housing stock included 4,100 homes flooded with 3,100 lost or extensively damaged displacing over 11,000 residents. Estimated damages to residential structures alone is more than $480 million, with losses to commercial, public and farm structures estimated at over $210 million.

With that kind of history, one could be forgiven for being surprised at the news that Minot is working hard to reconnect with the river. Or not: reconnecting with a community’s water is one of the most reliable revitalization strategies, as has been documented literally hundreds of times here in REVITALIZATION over the years.

While their current physical flood mitigation measures are similar to what’s found in many resilience playbooks, there’s been a parallel volunteer-driven effort underway in recent years to strengthen the community in other ways so it can learn to live alongside a river that will periodically bring high water.

An ice skating trail on the Souris River.Photo credit: Friends of the Souris.

Many in the community, including Straight and Mayor Chuck Barney, have rallied behind Friends of the Souris (whose Restoration Economy-style slogan is “Renew & Restore“). One their website, they say “Right now, the river is little more than a rock-lined ditch that sparks feelings of fear and financial loss. But in the days of Minot yore, before our thinking was dominated by the consequences of flood, the Souris River was a cultural centerpiece and a community asset. We want to reclaim the best parts of that mindset. We want the river to become point of pride, a place for safe recreation, to gather, and to reflect.”

That work has been supported by Cities of Service, a national non-profit organization funded in part by the Bloomberg Philanthropies that’s designed to assist communities leverage volunteers, foster social resilience and build a stronger and engaged community in the process. Cities of Service helps mayors build stronger cities by changing the way local government and citizens work together. Cities of Service coalition cities tap into the knowledge, creativity, and service of their citizens to help identify and solve pressing local challenges.

“That initial goal—reconnecting the community to the river—is happening in these meaningful and beautiful ways. It’s exciting from a sustainability standpoint,” according to Karen Dahl, communications director for Cities of Service.

Since its founding, Cities of Service has helped many cities implement change through the use of its Impact Volunteering strategy. This signature strategy engages citizen volunteers to identify and solve public problems alongside municipal government.

Featured photo courtesy of Friends of the Souris.